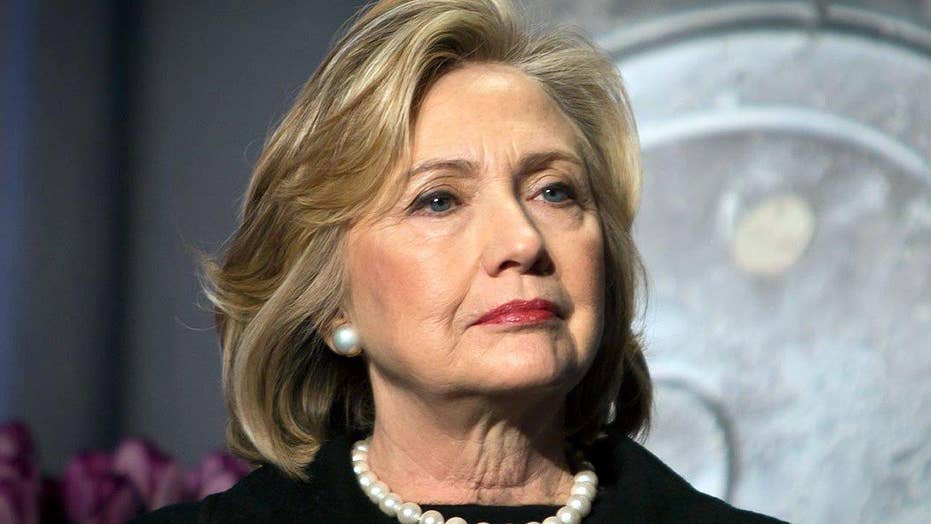 What happens if Hillary Clinton can't run for president?

How the e-mail scandal can potentially derail Hillary's campaign; Insight on 'The Kelly File'

In the video, veteran diplomat Wendy Sherman reveals that in the interest of speed, Clinton and her aides would share information that "would never be on an unclassified system" normally.

The questions surround a 2013 speech in which Sherman compared the technology differences between serving at the State Department in the administrations of President Bill Clinton and President Obama.

"Now we have BlackBerrys, and it has changed the way diplomacy is done," Sherman, who was undersecretary of state at the time, said in the 2013 on-camera remarks. "Things appear on your BlackBerrys that would never be on an unclassified system. But you're out traveling, you're trying to negotiate something. You want to communicate with people, it's the fastest way to do it."

Clinton's use of a personal server for her official emails during her time as secretary of state is now being reviewed by the FBI.

The Democratic presidential candidate has maintained she never sent or received information that was marked classified at the time. Questions also have been raised about whether classified emails were hacked by China, Russia, Iran and other nations.

During the 2011 visit, the secretary of state met with Lady Ashton of the European Union and, according to Sherman, the two high officials used their BlackBerrys to conduct Middle East peace negotiations.

"So they sat there, as they were having the meeting, with their BlackBerrys, transferring language back and forth between them and between their aides to multitask in a quite a new fashion," said Sherman. "To have the meeting and at the same time be working on the Quartet statement."

The Middle East Quartet is involved in facilitating the Israeli-Palestinian peace process, and consists of the U.S., the U.N., the E.U., and Russia.

Previous email releases by the State Department of Clinton's official correspondence show that in September 2011, Clinton aide Jake Sullivan forwarded her an email chain on the Quartet statement.

The State Department considered the correspondence sensitive enough that the department deemed some of those emails to now be classified, and officials redacted details before the emails were released to the public.

The conservative super PAC America Rising declared that under National Archives guidelines, the information deemed classified involves "foreign relations or foreign activities of the United States, including confidential sources," so it was born classified when the emails were created.

A Clinton aide would not comment on the video, which was revealed as new Fox News polls showed a tightening race between Clinton and Democratic Sen. Bernie Sanders. Clinton's once double-digit lead in Iowa has dwindled to just 6 points, while Sanders has opened a 22-point lead in New Hampshire.

The polls also showed that in both Iowa and New Hampshire, Democratic voters said the top quality they want in a candidate is being honest and trustworthy, while experience and electability were less important.

Ed Henry currently serves as the co-anchor of FOX News Channel's (FNC) America's Newsroom (weekdays 9AM/ET-12PM/ET), alongside Sandra Smith. He joined FNC in June 2011 and is based in New York.