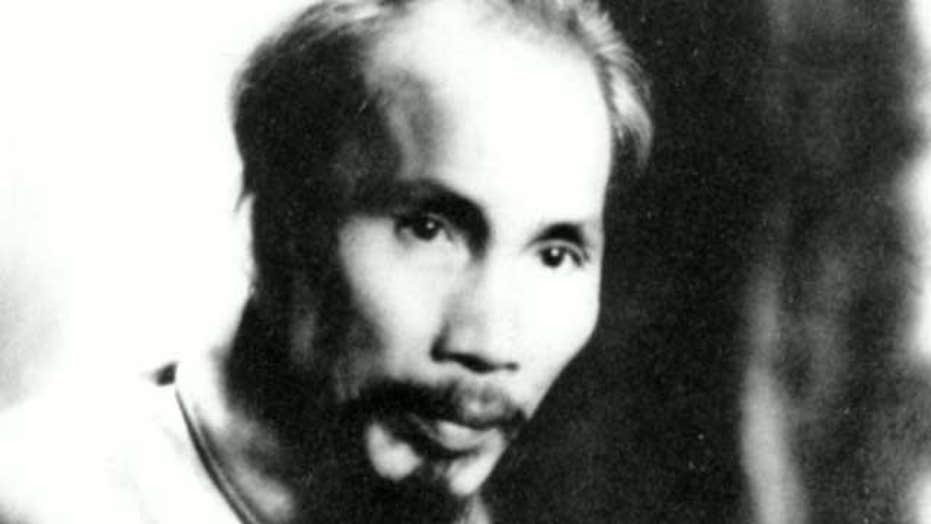 Compares him to US founding fathers

“...we discussed the fact that Ho Chi Minh was actually inspired by the U.S. Declaration of Independence and Constitution, and the words of Thomas Jefferson.”

It may come as some unwelcome news to the families of the nearly 60,000 Americans who died in the Vietnam War that the whole thing was just a misunderstanding.

That was the impression President Obama gave on Thursday when he spoke to the press after his meeting with Vietnamese President Truong Tan Sang. Sang brought Obama a copy of a letter sent to President Harry Truman from Ho Chi Minh in which the communist dictator spoke hopefully of cooperation with the United States.

Obama, striking a wistful tone, observed that it may have taken 67 years, but the United States and Vietnam were finally enjoying the relationship that Ho once wrote of. After all, Obama said, Ho had been “inspired by the words of Thomas Jefferson.”

The message here was that if only we might have bridged our differences then – if only Ho and Truman could have done what Obama and Sang did this week, so much unpleasantness might have been avoided.

While Jefferson did get pretty fired up about “the blood of tyrants,” it’s hard to see how the Sage of Monticello inspired the murderous career of the Vietnamese dictator. Ho famously slaughtered his opponents, including the infamous butchery of peasant farmers who resisted his brutal taxation in the early days of Ho’s regime. Not particularly Jeffersonian.

Estimates run as high as half-a-million killed in Ho’s effort to consolidate power after his communist forces drove the French out of Indochina. The killing of landlords and bourgeois-class merchants was famous even in its day and since then has been documented in even more horrifying detail.

And those who carried his banner forward following his death in 1969 – he remains “Uncle Ho” even to this day – built upon his brutal regime. Following the final U.S. retreat from Vietnam untold thousands of Vietnamese, deemed collaborators by the regime, were put to death. He and his Leninist regime used V.I. Lenin’s tactics: murder, terror and “reeducation” to obtain, maintain and expand power.

Ho, whose preserved corpse lies in a glass tomb modeled after Lenin’s in Hanoi, was a seriously bad actor. Whether the United States should have sought to oust him or not or whether the war was rightly fought, Ho was not any heir to Jefferson and the Founding Fathers.

In Obama’s credulous citing of the Constitution as an inspiration, there is particular historical dissonance. One of the great murders of the 20th century could not have been truly inspired by the most significant advancement of the rights of the individual in human history.

Obama may have just been trying to flatter his guest who was obviously eager to show that Ho was not the monster history shows him to be. But his connection between the American founders and Ho shows either a massive lack of historical knowledge on the part of the president or a remarkable degree of moral flexibility.

While the president and his team will no doubt dismiss any mention of this as “phony,” this, which as either a gaffe or facile flattery, will not be so easily waved off. The memories and frustrations of America’s Vietnam veterans remain strong forces even today.

“[President Obama’s] lower deficit now is higher than the highest ever in the Bush years.  It isn't exactly a record I think he ought to be running on…”