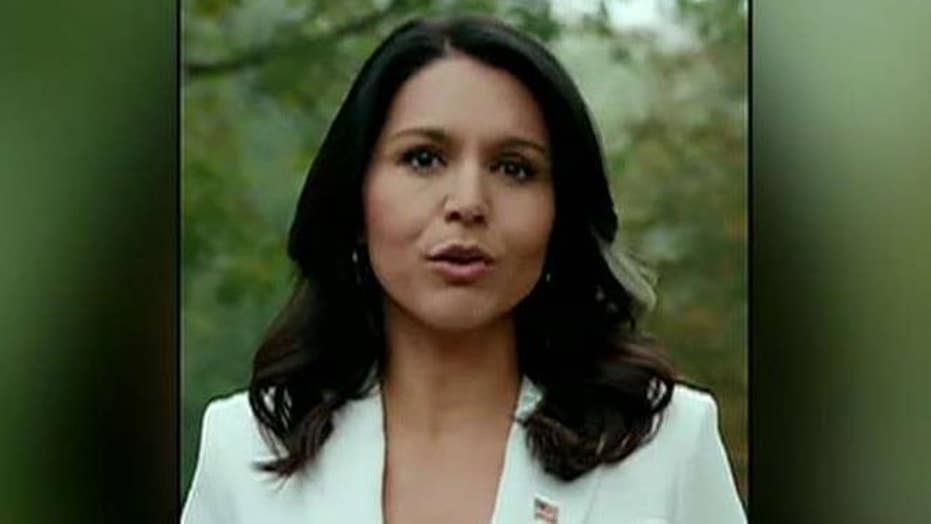 Democratic presidential candidate Tulsi Gabbard rejects suggestion that she is being groomed by Russia to run as a third party candidate; Peter Doocy reports from Des Moines, Iowa.

The video is Gabbard's latest response to Clinton's unsubstantiated suggestion that Gabbard was a "favorite of the Russians" in a recent interview. Clinton also claimed without evidence that Russians were "grooming her to be the third-party candidate" in the 2020 presidential election.

"Hillary, your foreign policy was a disaster for our country and the world -- resulting in the deaths and injuries of so many of my brothers and sisters in uniform, devastating entire countries, millions of lives lost, refugee crises," and more, Gabbard said.

"Yet despite the damage you have done to our country and the world, you want to continue your failed policies directly or indirectly through the Democratic nominee."

She added: "It's time for you to acknowledge the damage you have caused and apologize for it. It is long past time for you to step down from your throne so the Democratic Party can lead with a new foreign policy which will actually be in the interests of and benefit the American people and the world."

"Well, she had something to say about me, and I would have been very happy to have that conversation directly face-to-face with her," Gabbard, D-Hawaii, told reporters in Iowa.

President Trump on Monday also weighed in, telling reporters, "She's [Clinton] accusing everyone of being a Russian agent."

"She's not a Russian agent," Trump said of Gabbard. "These people are sick. There’s something wrong with them."

On Sunday, the congresswoman posted a video and said she would not be silenced by Clinton and "her gang of rich, powerful elite."

"If they can falsely portray me as a traitor, then they can do it to anyone -- and in fact, that's exactly the message they want to get across to you," Gabbard said. "If you stand up to Hillary and the party power brokers -- if you stand up to the rich and powerful elite and the war machine, they will destroy you and discredit your message. But, here is the truth: They will not intimidate us. They will not silence us."

In 2016, Gabbard quit as chairwoman of the Democratic National Committee (DNC) to support Sanders, and she accused party leaders of limiting her free speech and tipping the scales to favor Clinton's campaign.

She was warned that her endorsement of Sanders "would be the end of my 'political career' -- they said Clinton would never forget," Gabbard said Sunday.

“The short of it is that she’s on a book tour and is feeling unconstrained about speaking her mind,” Clinton spokesperson Nick Merrill told Fox News on Monday. “It’s easy to over-ascribe a strategy about every word she utters, but it’s as simple as that. She’s out there telling the truth.”

Fox News' Gregg Re and Paul Steinhauser contributed to this report.