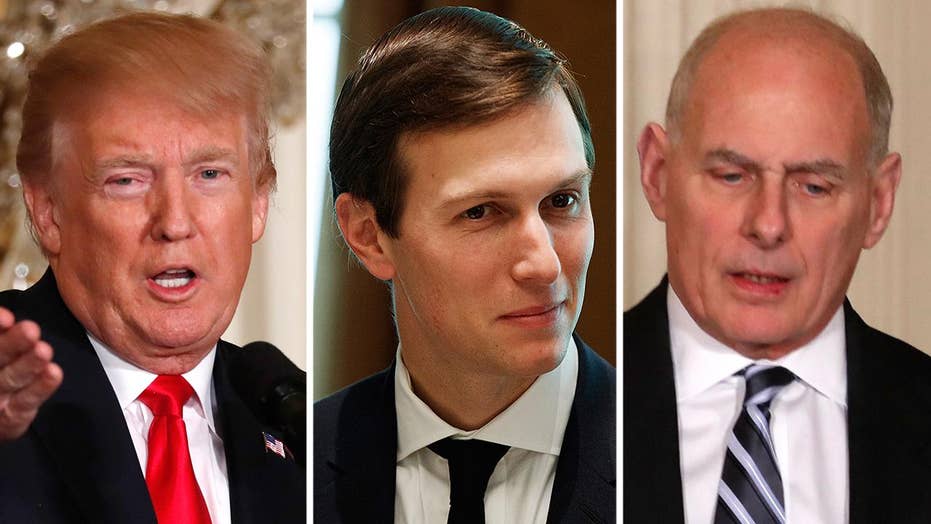 President Trump on Friday defended his son-in-law Jared Kushner as a “high-quality person” while saying chief of staff John Kelly will ultimately decide whether Kushner keeps his interim security clearance.

Earlier this month, Kelly informed White House staffers of an overhaul of security clearance procedures in the wake of the scandal over Rob Porter, the White House aide who resigned after past allegations of domestic abuse surfaced.

Asked about Kushner's situation, Trump defended his aide and son-in-law, saying: “Jared's done an outstanding job. I think he’s been treated very unfairly. He is a high-quality person.”

Added Trump: “Jared is truly outstanding. He was very successful when he was in the private sector. He's working on peace in the Middle East and some other small and very easy deals.”

Trump went on to describe the system for granting security clearances as “broken.”

Earlier this week, the White House maintained that Kushner's work will be unaffected by the change.

"Nothing that has taken place will affect the valuable work that Jared is doing," press secretary Sarah Huckabee Sanders said Tuesday. "He continues and will continue to be a valued member of the team. He'll continue to do the important work that he's been focused on for the last year."

Kelly, in a statement, said the White House looks forward to Kushner maintaining his role working on the Middle East peace process and U.S.-Mexico relations.

"As I told Jared days ago, I have full confidence in his ability to continue performing his duties in his foreign policy portfolio including overseeing our Israeli-Palestinian peace effort and serving as an integral part of our relationship with Mexico," Kelly said. "Everyone in the White House is grateful for these valuable contributions to furthering the president's agenda. There is no truth to any suggestion otherwise."

Sanders did not rule out Trump using his executive authority to grant Kushner a permanent security clearance, which would circumvent the traditional process run by the White House office of personnel security.

"I haven't spoken with the president about whether or not that would be necessary," Sanders said.

Kushner is reportedly said to review the highly secret presidential daily brief each morning and has been in the room for some of Trump's most consequential domestic and foreign policy decisions.

Trump made the comments during a joint press conference in the East Room of the White House with the Australian prime minister.

Relations between Trump and Turnbull got off to a tumultuous start shortly after Trump took office. They sparred during a contentious telephone call over a plan for the U.S. to accept refugees that had been agreed to by former President Barack Obama.

But on Friday, Turnbull thanked Trump for his “generous hospitality and friendship” and called his meeting with the president a “great opportunity to strengthen and deepen our engagement with the United States.”

“You are our most important strategic and economic partner,” Turnbull told Trump, saying he’s laying the groundwork for “a new phase of intensified cooperation -- the next 100 years of mateship.”

Trump said that in his meetings with the Australian delegation on Friday, “lots of deals were made for the purchase of additional military equipment and other things.”