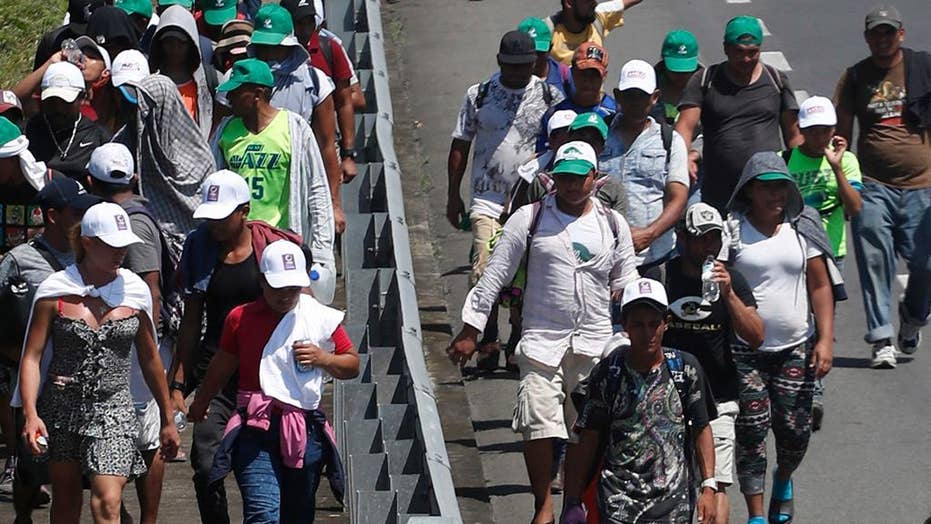 Showdown heads to the US border as caravan doubles in size

Mexico first told Trump it would stop the caravan, but reversed course after being overwhelmed by the size and wanted to avoid violent confrontation. William La Jeunesse has the story for 'Special Report.'

In an interview aboard Air Force One on Monday, President Trump made clear there was no limit to the number of troops he's willing to send to the border to address the growing migrant caravan quickly making its way through hot and humid temperatures in Mexico to the U.S. border.

The president previously vowed to send the U.S. military, as opposed to the National Guard, to confront the group, which the United Nations now estimates is over 7,200 members strong. Dramatic footage over the weekend showed the caravan, which is at least 1,100 miles from the U.S. border, defying Trump's warnings and smashing a border fence, as migrants flooded into Mexico despite the presence of riot police.

Trump told USA Today in an interview that "people from the Middle East” are among the thousands of migrants in the caravan, echoing remarks he made on Twitter Monday morning, when he complained there were MS-13 gang "criminals and unknown Middle Easterners mixed in." The president did not elaborate.

Asked how many troops he was willing to send, Trump told the paper simply, “as many as necessary."

More than 1,000 members of the caravan already have applied for asylum in Mexico, according to the country's government. It remained unclear whether this caravan would retain its numbers during the remainder of its journey; a similar caravan earlier this year started with 1,200 members and finished with 200 migrants arriving at the California border.

Deploying a large number of U.S. military personnel would avert some of the political headaches Trump faced earlier this year, when he tusseled with the governments of several states, including California, over how many of their National Guard troops they would agree to send to assist with border enforcement. In May, the president of a major union representing U.S. Border Patrol personnel claimed that Trump's decision to send National Guard troops to the U.S.-Mexico border that month was "a colossal waste of resources."

Federal law restricts National Guard troops in federal service from performing law enforcement activities, but they can when operating under state authority and are permitted to assist Border Patrol officers with certain law enforcement functions. The president has far greater authority to direct the U.S. military, as long as it is deployed off U.S. soil. 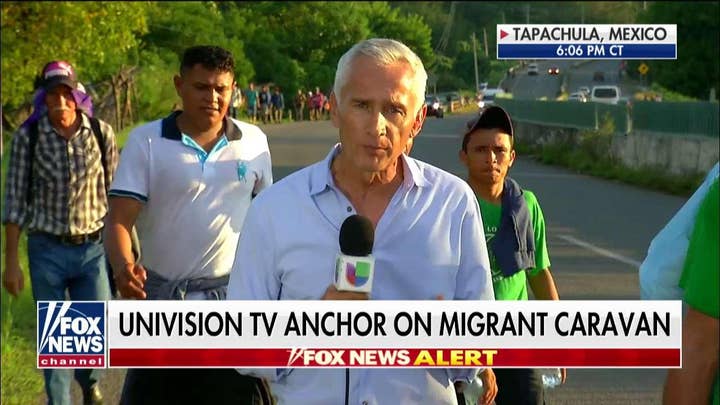 With less than three weeks until the pivotal Nov. 6 midterm elections, Trump has sought to portray his administration as a swift, decisive force on border security. In several major rallies across the nation, he has called this the "election of the caravan," among other salient issues.

Speaking to reporters outside the White House earlier Monday, Trump slammed several Central American countries that he charged were "doing nothing" about the caravan.

"We've got to stop them at the border."

"It's a lot bigger than 5,000 people," Trump said, referring to the caravan, "and we've got to stop them at the border."

"And unfortunately, when you look at the countries, they have not done their job," Trump added. "Guatemala, Honduras, El Salvador -- they're paid a lot of money every year, we give them foreign aid -- they did nothing for us. Nothing. So we give them tremendous amounts of money --- hundreds of millions of dollars. They, like a lot of others, do nothing for our country."

Trump continued: "What happened on the border is caused by the Democrats. Because they won't let anyone change immigration laws that are horrible." That was an apparent reference not only to the increasing prevalence of so-called sanctuary cities and states that shield illegal immigrants, but also to Congress' inability to agree on immigration reform or funding for his proposed border wall.

The migrant caravan, which started out more than a week ago with fewer than 200 participants, has drawn additional migrants along the way after many found ways to cross from Guatemala into southern Mexico as police blocked the official crossing point.

Late Sunday, authorities in Guatemala reported that another group of about 1,000 migrants had entered that country from Honduras.

Many migrants have said they've been escaping widespread violence, poverty and corruption in Honduras.

Still, the White House has framed the caravan itself as a potential importer of violence to the U.S., carrying on a theme it has emphasized in the past two years.