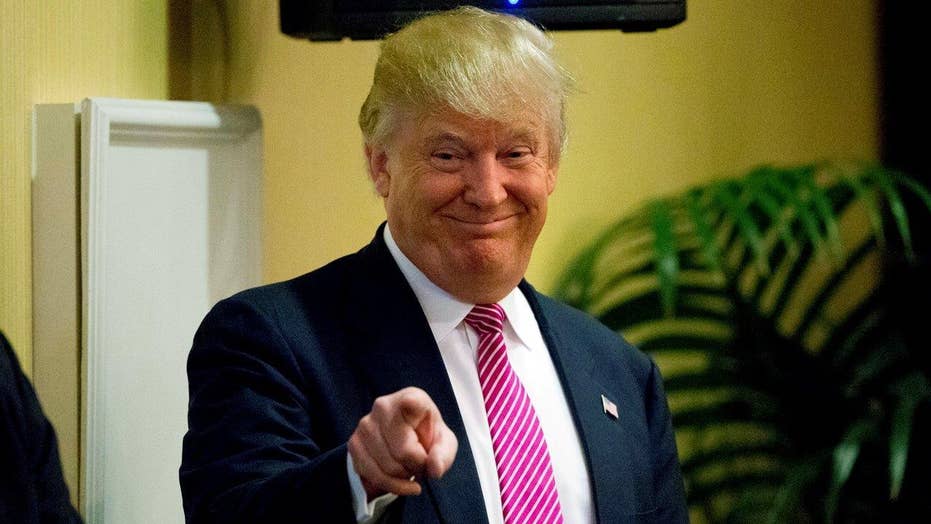 Donald Trump dramatically escalated his feud with rival Ted Cruz on Monday, threatening to sue the Texas senator over his eligibility for office if he does not retract alleged “lies” about Trump’s positions – and calling on the Republican National Committee to intervene on two fronts.

The billionaire businessman wants the RNC to pressure Cruz, and also stop allowing so many donors at the debates. If the RNC does not “get its act together,” Trump warned, they would be violating the “pledge” he signed to support the eventual GOP nominee.

While dragging the RNC into the fray, Trump’s already-nasty and personal feud with Cruz was hitting an unprecedented level. At a press conference and in a written statement, Trump demanded Cruz apologize for allegedly false statements about him – or he’ll follow through on threats to challenge in court the Canada-born senator’s eligibility to run.

“He doesn’t even have the right to serve as president, or even run as president. He was born in Canada. So I will bring that lawsuit if he doesn’t apologize,” Trump told reporters at a press conference.

Simultaneously, his campaign issued a statement detailing Cruz’s allegedly false statements about his positions on abortion, ObamaCare and more.

“If he doesn’t take down his false ads and retract his lies, I will [file suit] immediately. Additionally, the RNC should intervene and if they don’t, they are in default of their pledge to me,” Trump said in the statement.

The threats come as Cruz has questioned Trump’s positions on abortion, gun rights and other issues. In one new ad, the Cruz campaign warns conservatives are "just one Supreme Court justice away" from losing on issues that are important to them. Those issues, the ad says, include "life, marriage, religious liberty, the Second Amendment." It suggests Trump would nominate more liberal justices.

Cruz, though, is standing by his statements.

“Truth matters. You cannot simply scream liar when somebody points out the actual position of Donald Trump or the actual positon of Marco Rubio,” Cruz told reporters. “I will continue to focus on substance and truth.”

Trump for months has questioned Cruz’s eligibility to run, though the Cruz campaign dismisses such concerns – some legal analysts have said Cruz is eligible because his mother is an American-born citizen.

"The people of South Carolina want a consistent conservative they can trust," Cruz told reporters before his rally in Aiken.

But about the same time at a rally 130 miles away in Mount Pleasant, S.C., Trump called Cruz "the most dishonest guy I think I've ever met in politics."

The exchange was in keeping with the barbed tone of the race set at Saturday’s debate, where Cruz openly questioned Trump’s pro-life credentials and Trump called him “the single biggest liar.”

Trump went on to repeatedly accuse Cruz of lying on Monday.

Meanwhile, his comments about the RNC pledge renewed speculation that he’s threatening to mount an independent run for the White House.

Last September, after much intra-party drama, Trump signed a “loyalty pledge” saying he would support the eventual GOP nominee – though the document was not binding, it was an effort to soothe concerns he might strike out and run as an independent.

Trump said Monday that the RNC isn’t holding up its end of the bargain, suggesting the committee was hurting his campaign by giving out too many GOP debate tickets to donors. This was a reference to incidents at the last two debates, where Trump repeatedly was booed by the audience – and Trump, in turn, openly accused them of being rival candidate Jeb Bush’s donors and supporters.

“The RNC better get its act together,” Trump said at an earlier campaign stop in South Carolina. “I signed a pledge. But the pledge isn’t being honored by them.”

He later went on to say the RNC would be “in default of their pledge” if they don’t intervene in his dispute with Cruz.