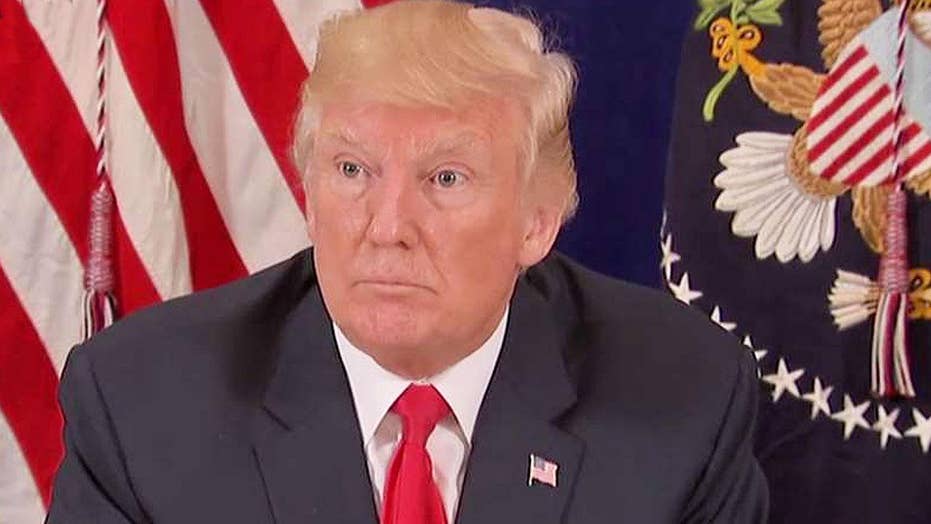 Trump: Kim Jong Un's not getting away with threatening us

President Trump turned up the heat even more on North Korea late Thursday, warning the regime of real consequences if it carries out an attack on Guam.

“Let’s see what he does with Guam,” Trump said of North Korea leader Kim Jong Un. “He does something in Guam, it will be an event the likes of which nobody has seen before – what will happen in North Korea.”

“It’s not a dare, it’s a statement,” Trump said of his vow to respond to any attack against Guam, a U.S. island territory.

Trump made the comments during a wide-ranging question and answer session with reporters at his Bedminster National Golf Club. He was seated at a table with Vice President Pence, National Security Adviser H.R. McMaster and CIA Director Mike Pompeo.

Earlier in the day, Trump doubled down on his “fire and fury” warning to North Korea, saying the country should be "very, very nervous" about even thinking of attacking the United States or its allies.

TRUMP DOUBLES DOWN ON ‘FIRE AND FURY’

It was the latest escalation for tensions that have been rising for days with North Korea. On Tuesday, Trump reacted to reports that North Korea had produced a compact nuclear warhead by warning the country that they “will be met with fire and fury” if they mess with the United States.

Hours after Trump’s original warning, state media in North Korea reported that its leaders were seriously considering a plan to fire missiles at Guam.

Aside from responding to that threat, Trump covered a variety of other topics during his session Thursday with reporters, including U.S. nuclear posture, the nuclear agreement with Iran, Special Counsel Robert Mueller and Senate Majority Leader Mitch McConnell.

“I’d like to de-nuke the world,” Trump said. “I would like Russia, the United States and China and Pakistan and many other countries that have nuclear weapons get rid of them. But until such time that they do, we will be the most powerful nuclear nation on earth, by far.”

Trump spoke of the Obama administration’s nuclear agreement with Iran, saying he doesn’t think they are “in compliance with the agreement” as negotiated.

“I don’t think they’re living up to the spirit of the agreement,” he said. “President Obama in his wisdom gave them $150 billion. He gave them $1.8 billion in cash. That’s a hard one to figure. But that was his decision. I think it’s a horrible agreement.”

He added: “I think you’ll see some very strong things taking place if they don’t get themselves in compliance.”

The president also discussed the investigation into Russia’s attempted meddling in the election, saying he hasn’t considered firing Mueller, as has been speculated.

“I haven’t given it any thought,” he told reporters. “Well, I’ve been reading about it from you people. You say, ‘Oh, I’m going to dismiss him.’ No, I’m not dismissing anybody. I mean, I want them to get on with the task.”

The president also defended his former campaign chairman, Paul Manafort, after reports this week that the FBI had raided his home as part of the Russia investigation.

“To do that early in the morning, whether or not it was appropriate you’d have to ask them. I’ve always found Paul Manafort to be a very decent man,” Trump said.

Asked about Russian president Vladimir Putin expelling U.S. diplomats from Russia, the president portrayed as it as a positive thing for taxpayers.

“I want to thank him because we’re trying to cut down our payroll and as far as I’m concerned I’m very thankful that he let go of a large number of people because now we have a smaller payroll,” he said.

He also continued to swipe at McConnell, the Senate majority leader, whom he has been dinging on Twitter this week for not being able to pass health care legislation in the Senate.

“I’m very disappointed in Mitch,” Trump said. “If he gets these bills passed, I’ll be very happy with him and I’ll be the first to admit it.”

Trump expressed confidence in McMaster, his national security adviser, who has come under fire from conservatives in recent days.

“He’s our friend. He’s my friend and he’s a very talented man. I like him and I respect him,” Trump said.

The president was also asked about the state of his relationship with Jeff Sessions, his attorney general whom he has criticized recently for recusing himself from the Russia investigation.