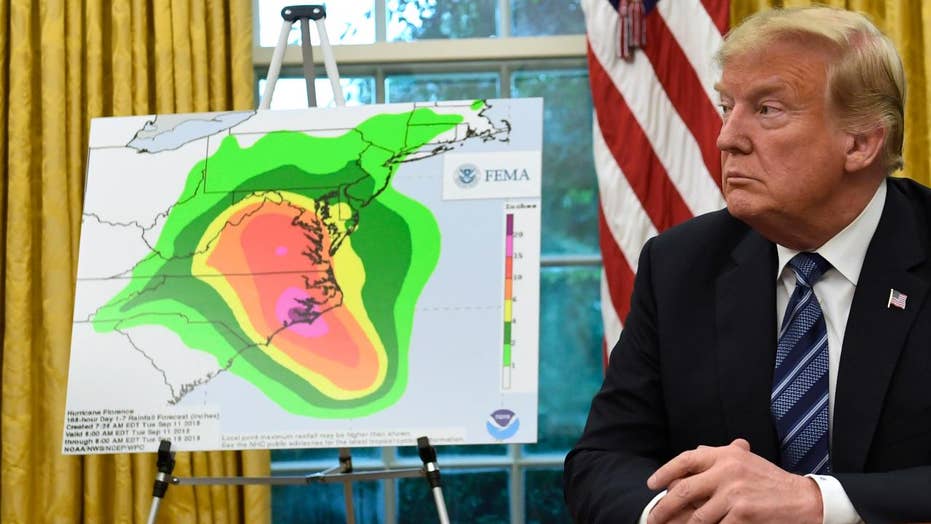 Trump: We are as ready as anyone has ever been for Florence

President Trump on Tuesday touted what he described as the “incredibly successful” response to the back-to-back hurricanes that struck Puerto Rico last year.

The president’s remarks came in the midst of an update in the Oval Office with officials on the status of Hurricane Florence, currently making its way towards the East Coast.

“I think Puerto Rico was incredibly successful,” Trump said, adding that he thought the storms that hit the island were “probably the hardest” thus far due to “the island nature.”

Hurricanes Irma and Maria struck the island in September 2017, the latter of which had its official death toll increased last month from 64 people dead to 2,975.

The Trump administration's efforts in Puerto Rico received widespread criticism. But after visiting the island last September, the president said that Puerto Ricans were fortunate that the storm did not yield a catastrophe akin to the havoc wreaked by Hurricane Katrina along the Gulf Coast in 2005.

In response to the president’s comments, Puerto Rico Gov. Ricardo Rossello issued a statement Tuesday on “the worst natural disaster in our modern history.” (AP)

In response to the president’s comments, Rossello issued a statement Tuesday on “the worst natural disaster in our modern history.”

“This was the worst natural disaster in our modern history. Our basic infrastructure was devastated, thousands of our people lost their lives and many others still struggle,” the statement continued. “Now is not the time to pass judgement; it is time to channel every effort to improve the lives of over 3 million Americans in Puerto Rico.”

Several Democratic lawmakers came out against the president’s words on Tuesday, including House Minority Leader Nancy Pelosi, D-Calif., who tweeted that “Americans expect their presidents to own up to their failures” and that Trump “must stop trying to deny that tragedy & take steps to save lives in the future.”

“President Trump’s characterization of his administration’s botched response to Hurricanes Irma and Maria as ‘incredibly successful’ and ‘one of the best jobs that’s ever been done’ is offensive to the families of the nearly 3,000 Americans who were killed and the countless more who suffered for months without power or running water,” Hoyer said in a statement. “He ought to apologize, and Congress ought to investigate what went wrong with the Trump Administration’s response and identify steps to ensure it does not happen again.”

“With another storm now threatening our country, I pray that the President and his team are not taking the same approach they did last year in preparing to meet this challenge,” the statement continued.

With the pending arrival of Hurricane Florence, Trump on Tuesday vowed that “the safety of the American people is my absolute highest priority” and that the government was “totally prepared” and would be “sparing no expense” in response efforts.