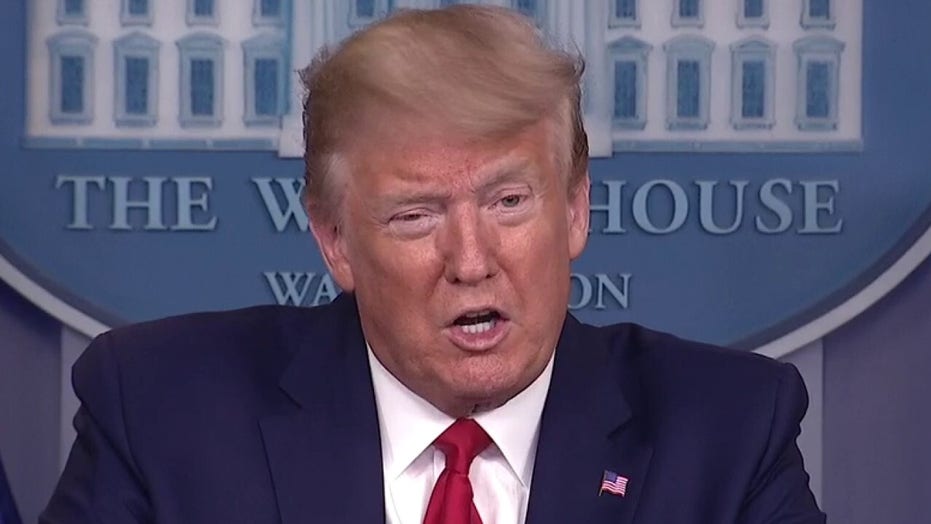 President Trump expressed his best wishes as he announced at the White House coronavirus briefing on Monday that he has enlisted the "help" of "brilliant" companies to assist British Prime Minister Boris Johnson, who was moved to the intensive-care unit of St. Thomas' Hospital in London hours earlier as he fights COVID-19.

"I've asked two of the leading companies -- these are brilliant companies -- Ebola, AIDS, others, they've come with the solutions and just have done incredible jobs -- and I've asked them to contact London immediately," Trump said.

He added: "They have offices in London, major companies -- more than major, more than size, they're genius. And I had a talk with four of them today and they speak a language that most people don't even understand. But I understand something: that they've really advanced therapeutics, and therapeutically, and they have arrived in London already. Their London office has whatever they need and we'll see if we can be of help. We've contacted all of Boris' doctors."

"It's a very complex treatment of things that they've just recently developed," Trump said later, in response to a question from a reporter. "They've already had meetings with the doctors, and we'll see whether or not they want to go that route. ... They're at the hospital, and they have everything with them should it be needed."

Trump did not specify which companies he contacted.

Johnson's office said the 55-year-old prime minister has been conscious and did not need ventilation. He asked Foreign Secretary Dominic Raab to deputize for him, the spokesman said.

“Over the course of this afternoon, the condition of the prime minister has worsened and, on the advice of his medical team, he has been moved to the intensive care unit at the hospital,” the spokesman added. “The PM is receiving excellent care, and thanks all [National Health Service] staff for their hard work and dedication.”

The move came just a day after Johnson was admitted for what were said to be routine tests.

Downing St. said Johnson was in the ICU in case he needed ventilation later.

The prime minister’s spokesman said Johnson had spent a comfortable night and remained in charge of government despite being admitted to the hospital after COVID-19 symptoms of a cough and fever persisted.

Britain has no official post of deputy prime minister, but Raab has been designated to take over should Johnson become incapacitated.