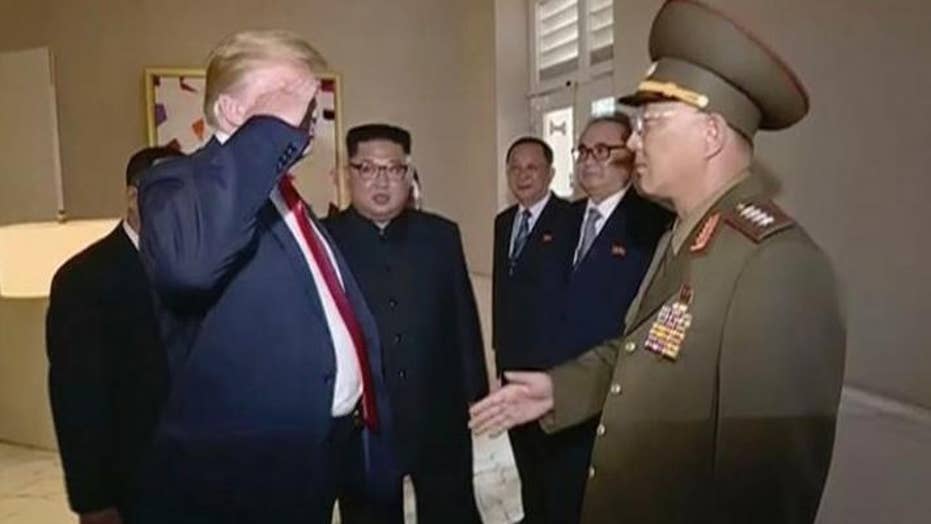 President Trump touted his relationship with North Korean Leader Kim Jong Un Friday, saying the two leaders have “a good chemistry,” and adding that he wants the people of the United States to “sit up and pay attention” when he speaks, like North Koreans do for the dictator of the rogue regime.

During an impromptu interview on the White House lawn Friday morning with “Fox & Friends,” the president suggested he would lift sanctions on North Korea when the U.S. “can be sure there will be no more nuclear.”

“We get along very well, we have a good chemistry,” Trump told Steve Doocy of “Fox & Friends.” “I don’t know if that’s supposed to be popular or politically correct to say, but we did have good chemistry.”

The president said the June 12 meeting with Kim on Singapore's Sentosa Island was successful, and defended his decision to attend the summit.

“I agreed to meet. Of course I agreed. You've got to agree to meet. If you don’t agree to meet, you’re gonna have nuclear war,” Trump said.

“He wants to make his country great,” Trump added, noting that North Korea hasn’t “had a rocket test in seven months.”

“He’s the head of a country. He’s a strong head,” Trump said. “He speaks and his people sit up and pay attention. I want my people to do the same.”

The president’s comments come amid scrutiny over video footage showing him saluting a North Korean military officer during the high-profile summit — a gesture the White House defended as “common courtesy.”

The president’s salute was caught on tape by North Korea state media, which used the footage in a documentary to memorialize the historic summit, where Trump and Kim signed a document agreeing to denuclearize the Korean Peninsula.

In the 42-minute-long video, which aired on North Korean state media and depicted Kim as the hero of the summit, the president is shown walking with Kim to shake hands with members of the North Korean delegation. The video shows Trump trying to shake the hand of Gen. No Kwang-chol, but then he moved to salute the military officer.

“It’s a common courtesy when a military official from another government salutes that you return that,” Sanders said during a briefing with reporters on Thursday.

According to the U.S. Army, “it is customary to salute officers of friendly foreign nations when recognized as such.”

But U.S.–North Korean relations are not historically considered “friendly.”

Critics of the president and the administration have said that the U.S. gave up too much by meeting with Kim.

The president, however, touted the new relationship between himself and the North Korean dictator, and the summit, as a success, suggesting the two leaders "understand each other."

“I think we have a very good relationship," Trump told Bret Baier in an exclusive interview this week. "We understand each other."

Critics have also blasted Trump for his positive comments about the dictator, whose gulags currently hold more than 120,000 political prisoners.

When asked about the human rights abuses and executions conducted by Kim’s regime, the president called Kim a “tough guy” but said “a lot of other people” have “done some really bad things,” too.

In the interview, Trump said that despite his call to bring back U.S. troops from South Korea, a military drawdown from the region is not being discussed as part of talks with North Korea.

The U.S., which currently has 28,500 troops stationed in South Korea, has maintained a combat force on the peninsula since the end of the 1950-53 war and has used them in a variety of large-scale drills designed to sharpen skills and test troops' ability to operate effectively with their South Korean partners.