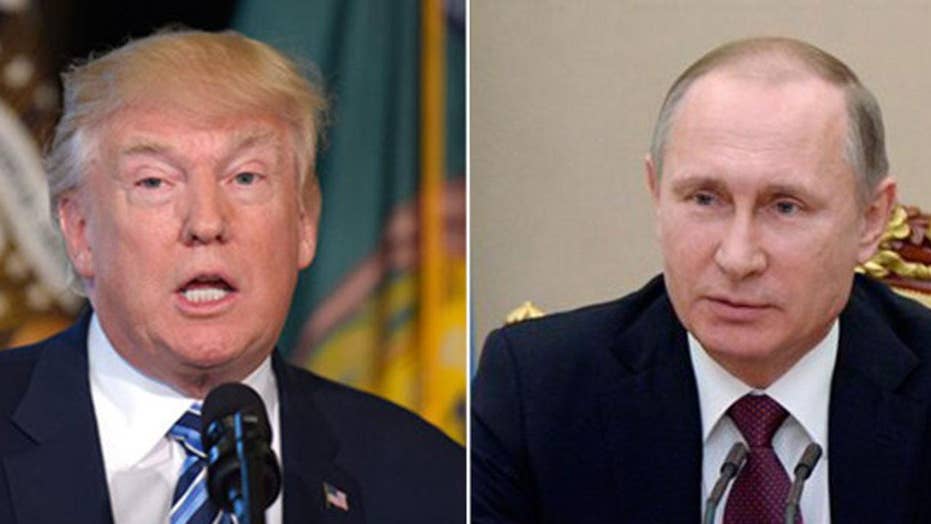 President Trump pressed Vladimir Putin on Russian election meddling while also making headway on the Syria crisis. But what should Trump take away from their first formal meeting? #Tucker

President Trump pressed Russia’s Vladimir Putin on U.S. election meddling while also making headway on the Syria crisis during their first formal meeting on Friday, according to administration officials who offered details on the highly anticipated sit-down in Germany which lasted more than two hours.

One of the big questions going into Friday’s meeting on the sidelines of the G-20 summit in Hamburg was whether Trump would confront Putin over long-standing allegations of meddling in last year’s presidential campaign.

Secretary of State Rex Tillerson told reporters that Trump in fact opened the meeting with those concerns, leading to a "robust" discussion.

"The president pressed Putin, on multiple occasions -- Putin denied involvement, as I believe he has done in the past," Tillerson said in an off-camera briefing with Treasury Secretary Steven Mnuchin.

“The two agreed this was a substantial hindrance to the ability to move the Russian, U.S. relationship forward,” Tillerson said.

At the same time, he said the two leaders "connected very quickly" and had "positive chemistry," focusing on ways to move forward as opposed to "relitigating" the past.

The centerpiece of those efforts is Syria, perhaps the most serious source of tensions between Washington and Moscow. Tillerson claimed the meeting yielded indications the two countries could in fact work together.

As the meeting was wrapping up, The Associated Press reported the U.S. and Russia reached an agreement for a cease-fire in southwest Syria, to take effect July 9. According to the AP, a separate deal to create "de-escalation zones" was brokered -- Tillerson confirmed the agreement during his briefing.

“Do we have the same objectives in mind? By and large, our objectives are exactly the same, but how we get there, we each have a view,” Tillerson said, adding “maybe they’ve got the right approach and we’ve got the wrong approach.”

Despite those comments, the U.S. and Russia have backed opposing sides in Syria, with Russia supporting its ally Bashar Assad and the U.S. having backed opposition forces for years. Both countries, though, are targeting Islamic State terrorists.

Tillerson confirmed to reporters Friday that the Trump administration’s stance on the Assad regime is unchanged.

“Our position continues to be that we see no long-term role for the Assad family or the Assad regime, and we have made this clear to everyone,” Tillerson said.

Given the controversy surrounding alleged Russian meddling in the U.S. presidential election and Democrats' efforts to tie Trump to Putin, the first meeting between the men was being closely watched.

Building expectations, Trump tweeted ahead of the meeting: "I will represent our country well and fight for its interests! Fake News Media will never cover me accurately but who cares! We will [Make America Great Again]!"

The Trump-Putin summit came amid shifting Trump rhetoric, as the president has begun taking a harder line with Russia. Trump was complimentary of Putin as recently as the October presidential debates, and during the election he often said he hoped the U.S. and Russia could improve relations.

But since assuming office Trump's optimism has waned, and he's criticized Russia for its unflinching support of Syrian leader Assad, even as he used chemical weapons. The U.S. also incurred Russian ire by agreeing to sell patriot missiles to Poland, and in a highly praised speech in Warsaw on Thursday, Trump specifically called out Russia for its subversive activities worldwide.

"We urge Russia to cease its destabilizing activities in Ukraine and elsewhere and its support for hostile regimes including Syria and Iran, and to instead join the community of responsible nations in our fight against common enemies and the defense of civilization itself," Trump said.

TRUMP CHIDES RUSSIA AHEAD OF PUTIN MEETING, THOUGH NOT ENOUGH FOR DEM CRITICS

Still, the change in tone has not been enough for some U.S. lawmakers, who urged Trump to confront Putin face-to-face over the alleged election meddling.

Asked on Thursday about the election meddling, Trump conceded he believed Russia was probably responsible -- but was quick to add the Kremlin may not have been the lone foreign entity trying to sow discord in American politics.

TRUMP, IN POLAND, VOWS THE 'WEST WILL NEVER, EVER BE BROKEN'

The Putin meeting is the highlight of a hectic, four-day European visit for Trump, who addressed thousands of Poles in an outdoor speech in Warsaw, Poland, on Thursday. He met in Germany with Chancellor Angela Merkel, the summit host, and had dinner with two Asian allies -- Japanese Prime Minister Shinzo Abe and South Korean President Moon Jae-in -- to discuss North Korea's aggression.