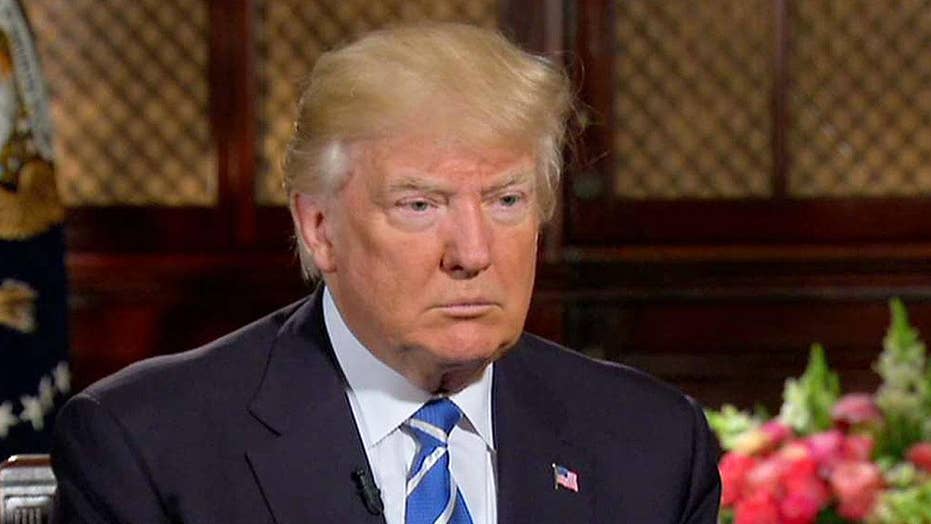 Trump: Don't like drawing red lines, but I act if I have to

The president sits down with Eric Bolling to discuss North Korea, foreign policy challenges on 'The Fox News Specialists'

President Trump, in an interview Monday on the premiere of “The Fox News Specialists,” named North Korea as his biggest foreign policy concern but stopped short of declaring what his ‘red line’ might be with Kim Jong Un.

“I don't like drawing red lines but I act if I have to act,” Trump told host Eric Bolling.

The president said Monday that “nobody’s safe” in the face of Kim Jong Un’s repeated tests of a nuclear weapon and missiles that might someday be able to carry a warhead beyond its borders with South Korea, where U.S. troops are stationed.

“We have 28,000 troops on the line and they're right there,” the president said. “If he gets the long-range missiles, we're not safe either.”

Still, Trump continued to stay mum about what he might do to stop Pyongyang’s pursuit of nuclear weapon or what action on North Korea’s part might trigger a military response.

“I'm not like President Obama where you draw a red line as you said a red line in the sand and then lots of bad things happen and he never goes over the red line,” Trump said.

He called Kim’s recent statements “very inflammatory” and “horrible,” but suggested he did not want to telegraph possible military action.

“I've been pretty well known for saying like nothing when it comes to the military,” Trump said. “… So when people say well, I was asked the question yesterday, ‘well I mean exactly when would you go in, at what time would you go in?’ I mean it's ridiculous. I don't want to talk about it. I can say this, he’s very threatening, he’s a big threat to the world.”

To be sure, Trump acted with little warning last month to order strikes on an airfield held by the regime of Syrian President Bashar Assad, after he used chemical weapons on residents in a country’s years-long civil war.

“I actually covered [Obama’s] red line for him in Syria,” Trump said Monday.

He also suggested that the Obama administration publicly announcing plans to defeat the Islamic State terror group in the Iraqi city of Mosul turned a projected brief battle into an extended one.

“It's still going on because the enemy knew they were coming,” Trump said.

Trump, meanwhile, acknowledged that North Korea is becoming his No. 1 foreign policy concern – “I think probably, yes,” he said – while claiming the U.S. is making “tremendous strides” in the separate fight against the Islamic State.

He continued to claim he can take media criticism when merited. “So I love the media. I think the media is great. If I do something bad, treat me badly. But they don't tell it like it is,” he said.

While the North Korea situation stands as perhaps Trump’s most pressing international concern, he is looking to notch legislative achievements in Washington on health care and tax reform -- two goals that eluded him during his first 100 days.

Asked whether he could get health care passed, after an initial bill failed in March, Trump told Bolling, “I’m doing the best I can.”

He said the latest plan, which could come for a vote as early as this week, is an improvement.

“These are the greatest people. We’re either gonna have a great plan or I’m not signing it. And I’ve said from day one, the best thing I could do is let ObamaCare die and then come in with a plan.”