President Trump on Tuesday called for a two-state solution to resolve the Israeli-Palestinian conflict, as he unveiled the details of his administration’s much-awaited Middle East peace plan.

Trump announced the proposal alongside Israeli Prime Minister Benjamin Netanyahu during remarks in the East Room of the White House.

While Trump and Netanyahu praised the plan as a way toward ending the decades-long conflict between the Israelis and Palestinians, odds of the peace plan taking shape are long given that the Palestinians have preemptively rejected the plan.

Trump acknowledged he’s setting out toward a goal that has eluded every U.S. president in modern times but claimed those prior efforts were too vague and short on critical details. Trump declared his plan is “the most detailed proposal ever put forward." 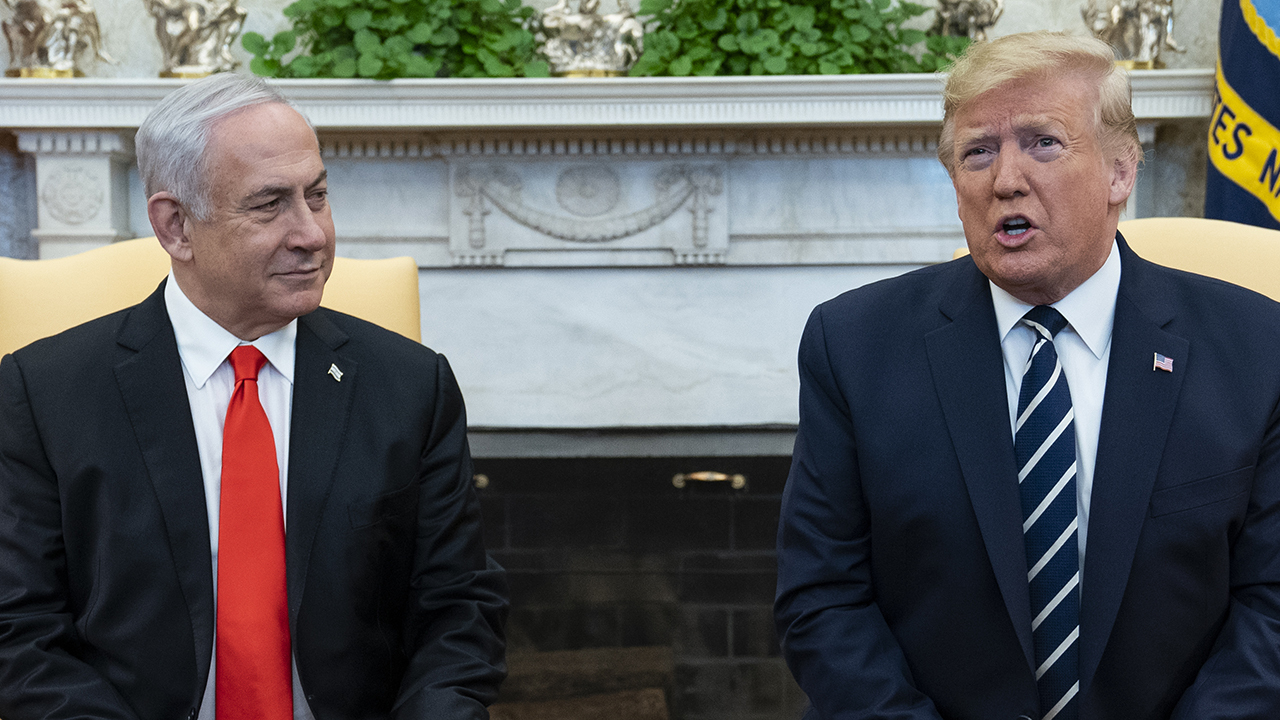 "All prior administrations from President Lyndon Johnson have tried and failed," Trump said. "In the past, even the most well-intentioned plans were light on details."

Trump added: "There is nothing tougher than this one, we have an obligation to humanity to get it done."

Netanyahu, who faces a tough re-election in March amid a corruption scandal, used his time on the dais to praise Trump's plan and how it benefited Israeli sovereignty and security. The Israeli leader added that past deals had not had the "right balance between Israeli security and Palestinians aspirations."

"You have charted a brilliant future for Israelis and Palestinians toward a lasting peace," he said. "For decades that peace has proved elusive."

White House officials described the plan as realistic and said Israel is prepared to act. According to White House officials, the plan calls for a two-state solution including the state of Israel and the "future" state of Palestine. Under the plan, the Palestinians would have to reach certain benchmarks to achieve a state. Those benchmarks include rooting out terrorism, stopping what they call “pay to slay,” implementing steps toward free speech, and other political reforms.

The plan is a basis for negotiations with Israel, Trump officials said, claiming many of the Palestinians' red lines are met, including their calls for a Palestinian state and a capital in parts of East Jerusalem.

The vision calls for more than doubling the amount of territory the Palestinians control.

"This plan will double Palestinian territory and set the capital of the Palestinian state in eastern Jerusalem where the United States will happily open an embassy," Trump said. "Our vision will end the cycle of Palestinian dependence on charity and foreign aid."

The plan also includes a map of a contiguous Palestinian state in the West Bank, with a proposed tunnel to connect the West Bank and Gaza Strip. There would also be land swaps south of Gaza to give the Palestinians more territory.

This is the first time Israel has agreed to a Palestinian state with defined borders.

A small strip of land between the Egyptian border and the proposed land swap areas south of Gaza would remain Israeli territory and be subject to Israeli security control. This was requested by Egypt as a buffer against cross-border terrorism.

As part of the plan, Israel has agreed to halt settlement construction for four years. But in one detail sure to provoke Palestinian objections, the plan recognizes Israeli sovereignty over major settlement blocs in the West Bank.

Israel would maintain sovereignty of the Jordan Valley east of the West Bank, according to the proposal. Israel would also maintain the security of the area.

There is a plan that over time, Palestinians would be able to achieve some civil sovereignty in the Jordan Valley, like farming, officials said.

While the Palestinians have been negative toward the plan, White House officials said Trump believes they will begin to move toward it.

Both Netanyahu and his political challenger, Benny Gantz, have agreed to implement this plan, regardless of the outcome of the upcoming March 2 election.

The officials portrayed the plan as Israel agreeing to massive concessions without jeopardizing its security, amounting to a serious good-faith effort that Israel has agreed to negotiate. The officials said the plan is realistic and Israel is prepared to follow through with it.

They also argue that the Trump administration’s moves to relocate the embassy and recognize Israeli sovereignty over the Golan were important confidence-building measures that led to this plan.

The Palestinians, though, refuse to even speak to Trump, saying he's biased in favor of Israel, and they are calling on Arab representatives to reject the Tuesday event at the White House. While Trump and Netanyahu were giving their comments, Palestinian leaders were meeting in the West Bank to discuss the plan.

Hamas, the Palestinian Sunni-Islamic fundamentalist militant organization that has waged war with Israel for decades, rejected the plan and called it a "theatrical presentation to sell illusions" in a comment to Fox News.