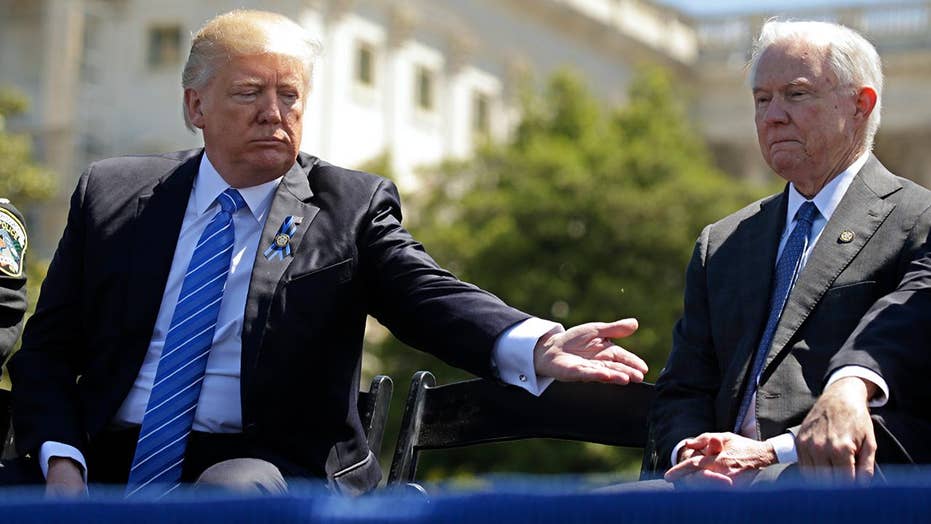 Trump vs Sessions: How POTUS turned on his AG

President Donald Trump has quickly changed his view of his attorney general, Jeff Sessions. From public praise to criticism, here’s a look back at their relationship

President Trump left the fate of Attorney General Jeff Sessions up in the air during a press conference Tuesday afternoon, saying he's "disappointed" with his Cabinet member while stopping short of saying whether he'll fire the country's top cop.

“We will see what happens,” Trump said in the White House Rose Garden. “Time will tell.”

The president has publicly vented his frustration at Sessions for recusing himself from the Russia investigation.

“He should not have recused himself almost immediately after he took office, and if he was going to recuse himself, he should have told me prior to taking office, and I would have, quite simply, picked somebody else,” Trump said. “So I think that’s a bad thing, not for the president but for the presidency.”

Trump also slammed Sessions for not being tough enough on leaks from intelligence agencies.

“These are intelligence agencies,” Trump said. “We cannot have that. I told you before that I am very disappointed with the attorney general but we will see what happens.”

Trump tore into the attorney general earlier Tuesday in a series of tweets where he called the former Alabama senator “VERY weak” on Hillary Clinton’s supposed “crimes.”

White House Press Secretary Sarah Huckabee Sanders would not confirm rumors that the president was considering firing Sessions but did not rule it out either.

She told “Fox & Friends” that she hasn’t been part “of any conversations discussing any potential replacements,” but made clear that Trump is “frustrated and disappointed” in the attorney general.

“That frustration certainly hasn’t gone away, and I don’t think it will,” Sanders said.

Despite the public digs from the White House, Sessions said last week that he plans to stay on as attorney general “as long as that is appropriate.”

Trump vowed U.S. humanitarian support for Syrian refugees as close to their homeland as possible – which means Lebanon. Syrian refugees make up about 25 percent of Lebanon’s population. Hariri was expected to seek additional U.S. aid to cope with the refugee influx though details were not disclosed Tuesday.

“America is proud to stand with those that have the courage to stand up to terrorism and take responsibility for affairs in their own region,” Trump said.

Trump also commented on the Senate vote that opened up debate on repealing and replacing ObamaCare.

“This is a tough vote to get,” Trump said. “Now we’re all going to sit together and we’re going to try to come up with something that’s really spectacular. We have a lot of options and a lot of great options. The Republican Senate… really went out there.”