President Trump refuted speculation that he intended to remove Health and Human Services Secretary Alex Azar from his post, instead tweeting Sunday evening, "Alex is doing an excellent job!"

"Reports that H.H.S. Secretary @AlexAzar is going to be “fired” by me are Fake News," Trump wrote. "The Lamestream Media knows this, but they are desperate to create the perception of chaos & havoc in the minds of the public. They never even called to ask."

A Politico article citing four sources familiar with the situation reported that the White House considered removing Azar after Biomedical Advanced Research and Development Authority (BARDA) Director Rick Bright controversially was transferred to the National Institutes of Health. Bright threatened to file a whistleblower complaint alleging that the move was "retaliatory treatment" for his doubts on the Trump-touted drug to fight coronavirus, hydroxychloroquine. However, HHS argued that Bright had worked to advance administration priorities on the controversial treatments and a report by Politico indicated Bright had been on thin ice with his superiors for months, if not more. 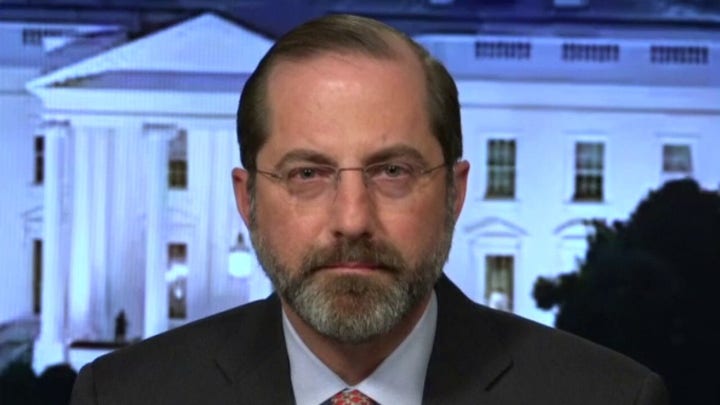 The White House apparently was caught off guard in recent days by Bright's pushback, apparently convinced by Azar that the move to NIH was a promotion. The Wall Street Journal reported that while officials acknowledged a change was discussed, the White House was hesitant to make a change during the coronavirus pandemic.

Fox News reached out to the White House and HHS for additional comment, but they did not immediately respond.

Angst against Azar allegedly had been brewing for weeks, with the White House said to be displeased by his initial handling of the coronavirus response. Azar led the efforts in the early days of the pandemic Vice President Pence replaced him in to oversee the pandemic's task force.

His office has remained still in charge of researching vaccines and hunting for a cure to COVID-19 which has killed over 54,000 Americans and infected over 954,000 others, according to recent estimates. Azar also was responsible for distributing $100 billion in federal aid to hospitals and physicians on the front lines of the pandemic.