Trump: If Hillary Clinton would've won, US economy would be in a depression

One day after formally launching his 2020 presidential bid, President Trump told Fox News' "Hannity" exclusively on Wednesday that investigators are working to determine whether his personal phone calls were secretly monitored by U.S. intelligence agencies during the 2016 campaign -- a possibility he called "the ultimate."

Trump also hammered House Democrats for putting his former top communication advisor Hope Hicks "through hell," after pictures of Hicks testifying before a closed-door session on Capitol Hill earlier in the day leaked on social media.

"What's happened to the Democrats -- and in the meantime, they're not doing any work in Congress," Trump told Sean Hannity, calling the party "unhinged."

"They're not allowed to do that. It's probably illegal," Trump said, referring to the leaked pictures of Hicks. Some Democrats complained that Hicks, in her appearance before the House Judiciary Committee, was ordered by the White House to stay quiet about her time as an aide to Trump, citing legal privileges.

But, Trump condemned Democrats' ongoing hearings on collusion and obstruction as an attempt at a "do-over" of Special Counsel Robert Mueller's Russia probe.

"Take a look at Ukraine," Trump said. "How come the FBI didn't take the server from the DNC? Just think about that one, Sean." That was a reference to the DNC's decision in 2016 to turn over its server to the private security firm Crowdstrike, rather than the FBI, after what prosecutors said was a Russian-led hack.

The Hill's John Solomon reported earlier Wednesday that the FBI, in search warrant affidavits, relied heavily on leaked Ukrainian financial documents concerning former Trump campaign chairman Paul Manafort -- even though the bureau was repeatedly warned that the documents were untrustworthy and likely fake.

Earlier this year, Ukraine Prosecutor General Yurii Lutsenko opened a probe into the so-called "black ledger" files that led to Manafort's abrupt departure from the Trump campaign. The investigation commenced after an unearthed audio recording showed that a senior Ukrainian anticorruption official apparently admitted to leaking Manafort's financial information in 2016 -- including his ties to pro-Russian actors in Ukraine -- to benefit Clinton.

A Ukrainian court recently ruled that the Manafort leak amounted to illegal interference in the U.S. election. A 2017 investigation by Politico found that Ukrainian officials not only publicly sought to undermine Trump by questioning his fitness for office, but also worked behind the scenes to secure a Clinton victory.

"I don't hear Russia much anymore. You know, they've given up on that one."

"I think it's a disgrace," Trump said.

Numerous issues with the Steele dossier's reliability have surfaced, including several that were brought to the FBI's attention before it cited the dossier in its FISA application and subsequent renewals. Mueller's report made plain, for example, that former Trump attorney Michael Cohen did not travel to Prague to conspire with Russian hackers seeking to access Democrat files, as the dossier alleged.

"The fact is, they were spying on my campaign, using intelligence agencies to do it. ... We're trying to figure out whether they listened to my calls. That would be the ultimate. We'll see what happens. If that happens, we'll probably find out. If they spied on my campaign and they may have, it will be one of the great revelations in history of this country. It will be very interesting. I think we're gonna find out."

Trump said Attorney General Bill Barr is working "very hard" to get to the bottom the matter.

The lengthy phone conversation began with Trump recounting the Tuesday night launch of his campaign in the jam-packed Amway Center in Orlando. Thousands of Trump supporters arrived more than 40 hours in advance to secure a spot, despite sweltering Florida heat. Some had been camped in chairs for several nights. 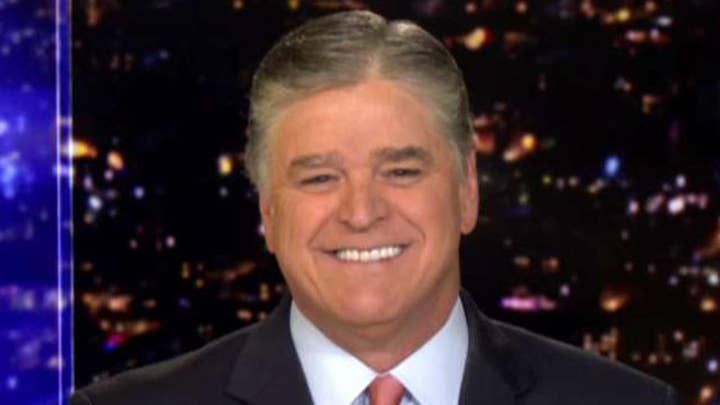 "It was an incredible scene -- and outside there were thousands of people," Trump told Hannity, comparing the atmosphere to that of a national college football championship. "It was just an electric evening. ... It's a tailgate party for our country."

Trump noted that the U.S. has become "number one in the world in energy," referring to the fact that the U.S. is the world's leading crude oil producer. The head of the International Energy Agency said in 2018 that, because of the "shale revolution," the U.S. "is becoming the undisputed leader of oil and gas production worldwide.”

The positive economic indicators, Trump said, have led Democrats to desperately pivot to discussing obstruction, now that Mueller's report found no evidence of Russian collusion by the Trump campaign, despite multiple efforts by Russian-linked actors to involve the Trump team in its hacking efforts.

"I don't hear Russia much anymore. You know, they've given up on that one," Trump said, before touting his administration's economic successes. "We have the best, lowest unemployment rate for blacks, Asians, Hispanics -- nobody's ever seen numbers like this... If the other side had won, we'd have gone into a depression.

"We have more poeple working today -- almost 160 million people -- than have ever worked in the history of our country," Trump added. "Think of it -- it's a great number."

Trump also denied a Wall Street Journal report that he will live-tweet the upcoming Democrat primary debates, but suggested it might not be a bad idea.

"When I make a speech, like last night -- there was a fantastic woman in the front with a sign, 'Please keep tweeting, it matters,'" Trump continued. "And, I think it does matter. I don't do it because I enjoy it. When somebody says an outright lie on MSNBC or CNN ... I can counteract those lies, and I have many more followers than they do."