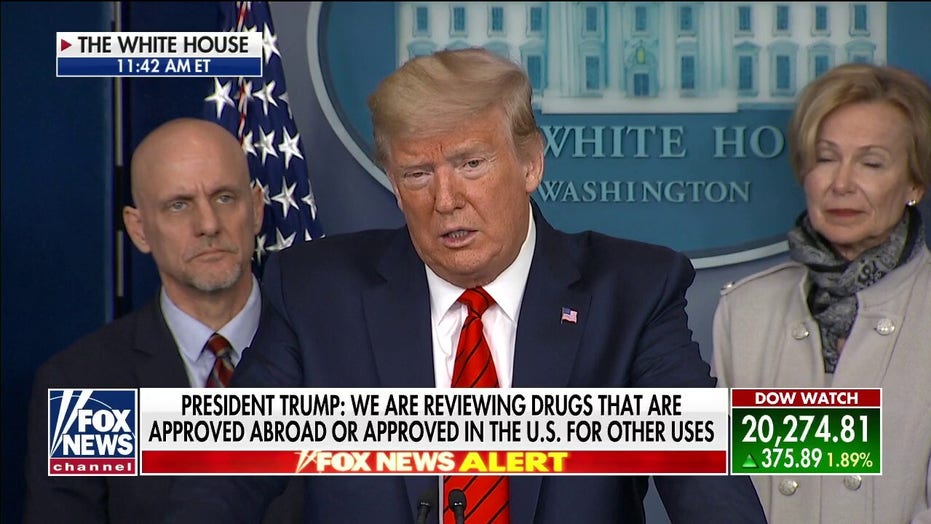 President Trump announced Thursday that the Food and Drug Administration (FDA) is making experimental drugs -- including those used for treating malaria -- available as part of the ongoing effort to tackle the spread of the coronavirus.

Trump announced at a White House press briefing that chloroquine, a drug designed for use in malaria, will be made available to test whether it helps patients recover from coronavirus. He said it was one of a number of antiviral therapies to limit the symptoms of the virus that the administration is trying to get to Americans as quickly as possible.

FDA Commissioner Stephen Hahn explained during the press conference it would be allowed under what’s known “compassionate use” -- where doctors can request to use the experimental drug and get permission from the FDA to give to patients. Hahn also said he didn't want to give "false hope" but said he was hopeful about the treatments.

Addressing potential safety concerns, Trump noted that it had been used previously in treating malaria, “so we know if things don't go as planned, it’s not going to kill anybody.”

He also said another drug, remdesivir, would be made available too. He said it would remain to be seen whether it would help combat the crisis. 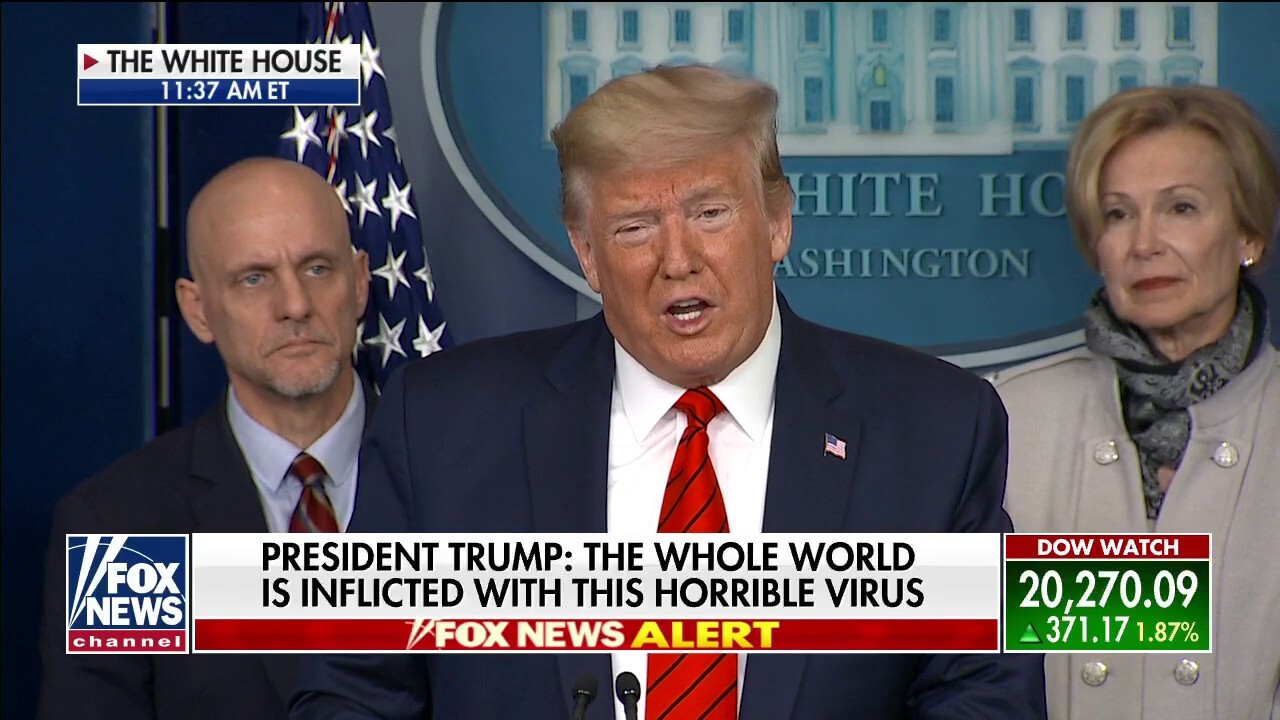 “I think it could be a game-changer, and maybe not,” he said.

It’s the latest aggressive move by the administration as it seeks to stop both the spread of the virus, and also curb the economic havoc caused by the closing of much of American daily life as businesses and schools have shuttered to stop infections. Trump described a “relentless effort to defeat the Chinese virus.”

He also renewed his efforts to focus the blame of China, where the outbreak of the virus began. When asked about allegations his administration had been slow in responding to the crisis, he took issue with the premise of the question -- pointing to his order to restrict travel from China -- and said it could have been contained if only the Chinese government had done more.

"It could have been contained to that one area in China where it started," Trump said. "And certainly the world is paying a big price for what they did."

During the press conference, Vice President Mike Pence said that the administration has "identified tens of thousands" of ventilators that can be converted to treat coronavirus patients.

PENCE SAYS ADMIN HAS IDENTIFIED ‘TENS OF THOUSANDS’ OF VENTILATORS

Trump also said Thursday the government should take an equity stake in companies that need bailouts because of the devastating effects of the coronavirus on the U.S. economy, saying he has executive authority to curb the impact on businesses.

"There's a lot of executive power," he said. "If we don't have to use it, that would be a good thing, not a bad thing." 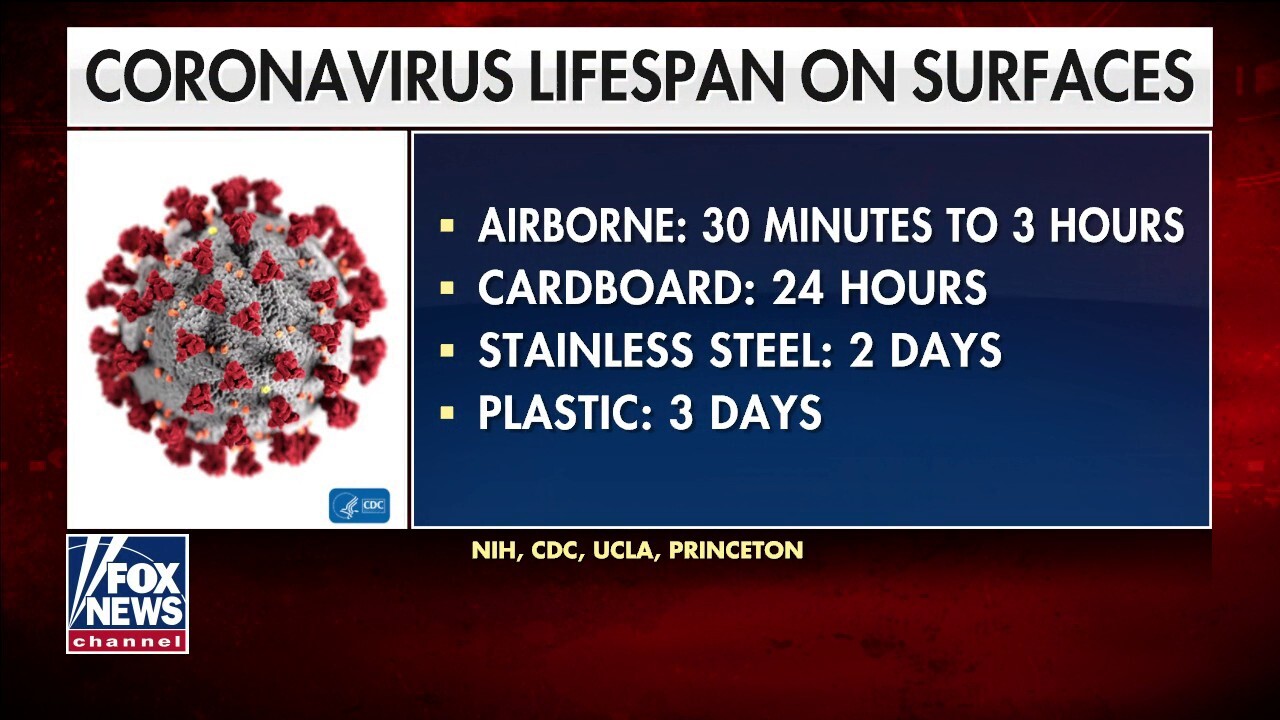 Thursday’s press conference comes a day after he announced he was invoking the Defense Production Act, which would streamline production of medical supplies to help the country battle the coronavirus pandemic and require businesses to sign contracts or fulfill orders deemed necessary for national defense. He has not yet used the powers invoked in it, however.

Meanwhile, the administration has been working with Congress on a nearly $1 trillion stimulus package to reinvigorate the U.S. economy and to provide relief to businesses and workers who have been hit hardest by the crisis. The administration is considering sending checks directly. He said Thursday the package would be focusing on small businesses, as well as industries such as airlines and cruise lines.