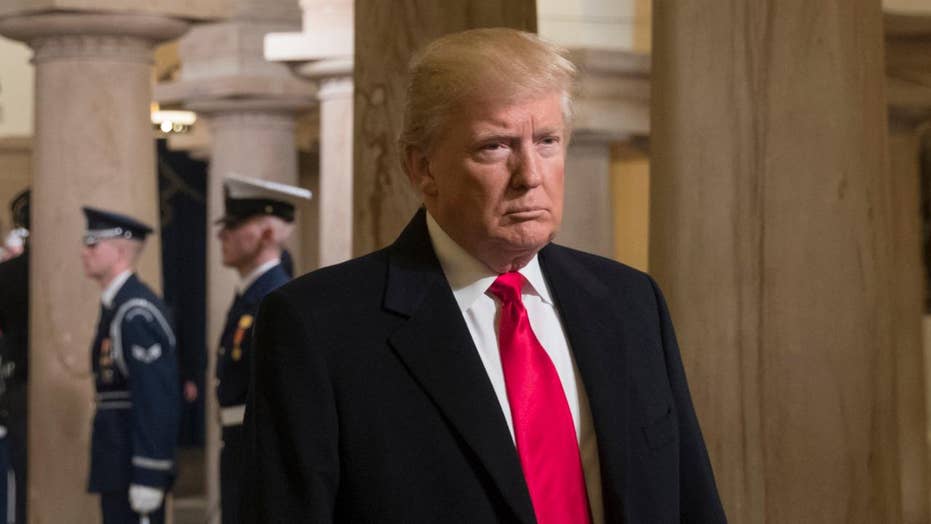 Trump: NFL should have suspended players for kneeling

President Trump on whether the NFL should have suspended players for kneeling during the National Anthem and on Hillary Clinton’s election loss.

President Trump slammed the lack of “leadership” in the NFL early Monday, after yet another weekend of national anthem protests.

The president’s tweet comes one week after NFL Commissioner Roger Goodell and NFL owners held their annual fall meeting in New York City, where the league discussed “plans to utilize” their platform “to promote equality and effectuate positive change” -- but seemingly did not set a league-wide requirement that players stand for the anthem.

Associated Press journalists counted 22 players protesting during the anthems in some way before day games on Sunday. Some took a knee, while others sat on the bench, stayed in the tunnel or raised a fist.

On Sunday, the Seahawks and 49ers had the most protesters. Seattle defensive end Michael Bennett and seven Seahawks teammates did not stand during the anthem before their game with the New York Giants.

The controversy began dominating headlines after a rally in Alabama last month when Trump called for players to be fired if they disrespected the flag, spurring the weeks-long feud between the White House and the NFL.

The president has repeatedly posted to Twitter over the last month about the NFL, slamming the league’s lack of action and leadership.

.@NFL: Too much talk, not enough action. Stand for the National Anthem,” Trump tweeted on Friday.