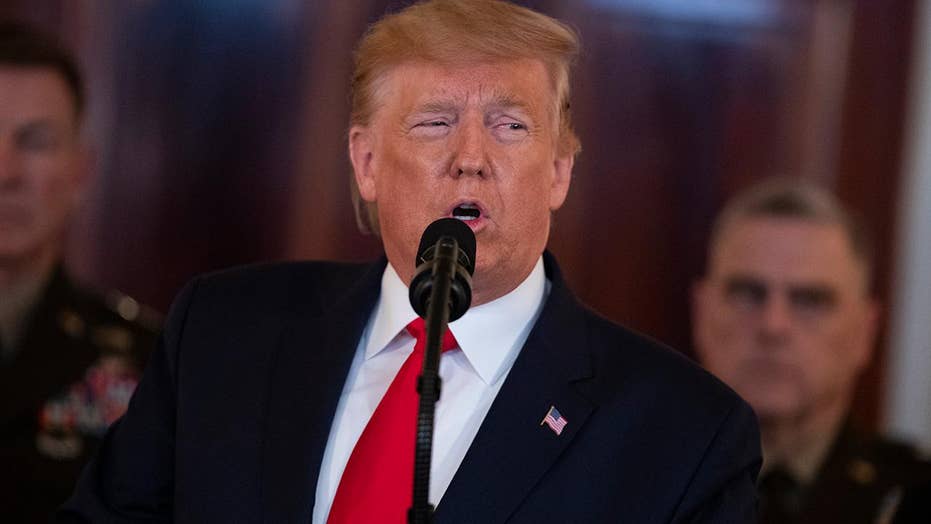 Should Americans unite behind President Trump in face of Iranian aggression?

President Trump called on fellow Republicans to oppose a resolution meant to place restrictions on his ability to take military action without congressional approval, as the House prepares to vote on the measure late Thursday.

House Speaker Nancy Pelosi announced the planned vote in a one-page statement that said last week's U.S. drone strike that killed Iranian Gen. Qassem Soleimani was "provocative and disproportionate," despite Trump administration claims to the contrary. Many Democrats were also incensed that the administration did not notify Congress in advance.

"Hope that all House Republicans will vote against Crazy Nancy Pelosi’s War Powers Resolution," Trump tweeted. "Also, remember her 'speed & rush' in getting the Impeachment Hoax voted on & done. Well, she never sent the Articles to the Senate. Just another Democrat fraud. Presidential Harassment!"

The Democrat-authored resolution would assert congressional authority and rebuke Trump’s decision to take out Iran’s top general without their consent. Fox News obtained the text of the resolution the House is prepping for debate on the floor. The resolution “requires the president to consult with Congress ‘in every possible instance' before introducing United States Armed Forces into hostilities."

The measure also appears to handcuff Trump when it comes to future strikes. The resolution says “Congress has not authorized the president to use military force against Iran.” The measure also “directs the president to terminate the use of United States Armed Forces to engage in hostilities in or against Iran or any part of its government or military” unless there is a specific blessing by Congress.

The original War Powers Resolution was passed in 1973 in response to U.S. activity in the Vietnam War. Former National Security Adviser John Bolton on Thursday called that resolution "unconstitutional," arguing that it should be repealed because it "reflects a fundamental misunderstanding of how the Constitution allocated foreign affairs authority between the President and Congress."

Trump is hardly the first president to face such authorization and notification complaints from Congress. Since 1973, questions of presidential compliance have become common, with controversy stemming from then-President Bill Clinton’s actions in Kosovo and then-President Barack Obama’s operations in Libya.

Thursday's House vote was scheduled shortly after a briefing on Iran Wednesday by top administration officials that many Democrats criticized as lacking specific justification for the killing. Iran retaliated early Wednesday local time by launching missiles at two military bases in Iraq that house American troops. No casualties were reported, and Trump signaled that the situation could de-escalate.

Republicans, meanwhile, say the proposal – a special type of resolution that does not get the president's signature – does not have the force of law. Democrats say that under the 1973 War Powers Act, it would be binding if also approved by the Senate. The matter has not been definitively decided by federal courts.

Fox News' Alex Pappas and Chad Pergram and The Associated Press contributed to this report.