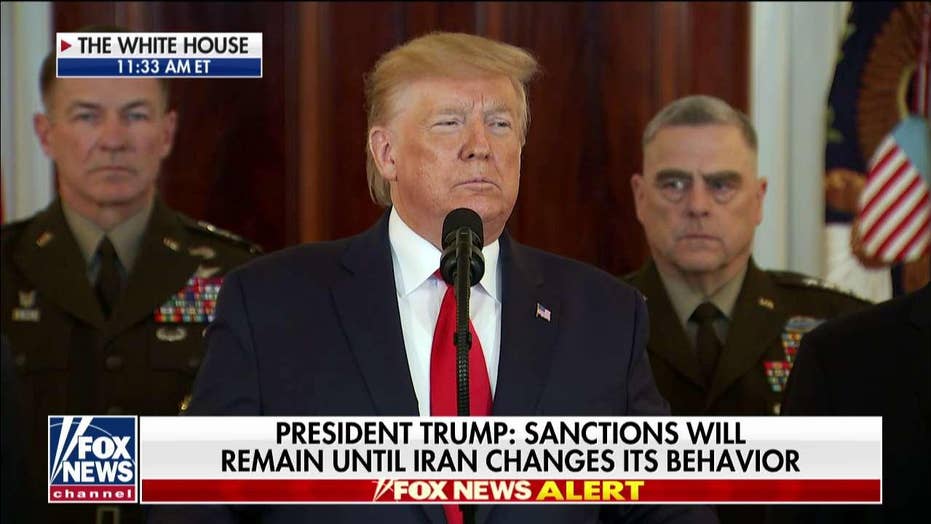 Democrats huddled at the Capitol Wednesday morning plotting how to rein in President Trump after he authorized the lethal strike against Gen. Qassem Soleimani,  even as the president signaled shortly afterward that he's looking to de-escalate the situation.

While it's in a holding pattern for now, a Democrat-authored resolution could still be considered in the coming days to reassert congressional authority and rebuke Trump’s decision to take out Iran’s top general without their consent. Democrats fumed at the president Wednesday morning, even likening him to an "arsonist" in the region.

“Donald Trump may have been an arsonist that lit a fuse that plunges the Middle East into a catastrophic war, though he's trying to pretend as if he's a firefighter,” said Rep. Hakeem Jeffries, D-N.Y. “That's a problem.”

Jeffries, the chairman of the Democratic caucus, said the killing of Soleimani and Iran’s subsequent retaliatory missile strikes were top of mind at the Democrats' first caucus meeting of the new year. Impeachment did not come up, despite the issue gripping Capitol Hill before the holiday recess.

Democrats demanded answers from the administration about the alleged imminent threat that sparked the Soleimani attack, and how Trump will de-escalate the tensions with Iran and keep Americans safe.

“Despite what the president tweeted, all is not well,” said Rep. Katherine Clark, D-Mass. She was referencing Trump’s Twitter response to Iran’s missile attacks on Iraqi bases that house U.S. troops.

Trump said Wednesday morning that Iran, though, appears to be standing down and there were no causalities in its retaliatory attack.

TRUMP SAYS IRAN ‘APPEARS TO BE STANDING DOWN,’ MISSILE STRIKES RESULTED IN NO CASUALTIES

“The American people should be extremely grateful and happy,” Trump said in a White House address. “No Americans were harmed in last night’s attack by the Iranian regime.”

House leaders are drafting the War Powers Resolution measure to limit Trump's military actions on Iran. It would require Trump to remove U.S. forces from any military campaign against Iran within 30 days of the resolution's enactment if Congress hadn't authorized the use of force.

Sen. Tim Kaine, D-Va., is leading a similar effort in the Senate.

"This is a very serious time here in America," Jeffries said.

American troops and civilians are in harms’ way “unnecessarily, in the view of many, because of the provocative and potentially unlawful actions of the president of the United States," he added.