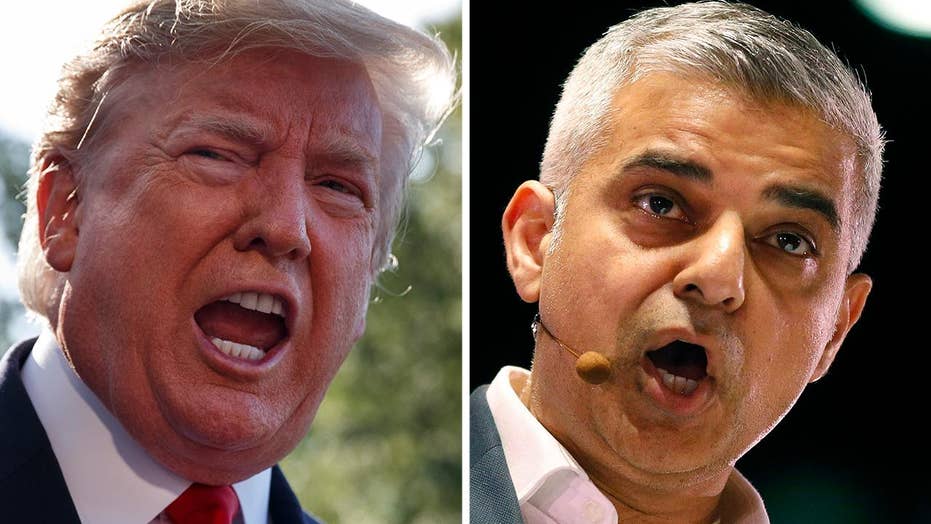 Trump: Mayor of London is a ‘stone cold loser’

President Trump landed in the U.K. on Monday for the start of a weeklong journey that is largely ceremonial and continued his barrage of criticism for London Mayor Sadiq Khan who recently penned a critical column of the president he sees as a "global threat."

Prior to departing from Washington on Sunday, Trump called Khan the "twin" of New York City’s liberal Mayor Bill deBlasio “except shorter.”

The London mayor recently said Trump was not in the “same class” as his predecessors. Prior to Trump’s visit, Khan wrote a column titled, “It’s un-British to roll out the red carpet for Donald Trump.”

Khan pointed out Trump’s most controversial policy initiatives and likened them to the actions of European dictators of the 1930s and 40s.

“Donald Trump is just one of the most egregious examples of a growing global threat,” Khan wrote. “The far right is on the rise around the world, threatening our hard-won rights and freedoms and the values that have defined our liberal, democratic societies for more than seventy years.”

Trump told reporters that he does not give Khan much thought, but went on to compare him to de Blasio, who announced his bid for president. Trump has called de Blasio “the worst mayor in the history of New York City,” according to The New York Post.

Despite playing down how much thought he gives Khan, Trump continued the attack Monday and said on Twitter that Khan reminds him of "our very dumb and incompetent Mayor of NYC." He called Khan a "stone cold loser."

Khan's office said in response that the comment is "much more serious than childish insults which should be beneath the President of the United States. Sadiq is representing the progressive values of London and our country warning that Donald Trump is the most egregious example of a growing far-right threat around the globe, which is putting at risk the basic values that have defined our liberal democracies for more than 70 years."

Trump attempted to clarify that he would not let Khan dampen his trip and said he looks forward to the visit, which includes a state visit and an audience with Queen Elizabeth II in London

Trump will be in the U.K. from Monday to Wednesday to commemorate the 75th anniversary of D-Day, which comes at a tumultuous time in British politics, with Prime Minister Theresa May due to step down on Friday.

Trump has weighed into the debate on who should replace May and threw his support behind former Foreign Secretary Boris Johnson.