The Trump administration and congressional leaders, including Democrats, have reached a critical debt and budget agreement that all but eliminates the risk of another government shut down this fall -- but that has already drawn fierce blowback from fiscal conservatives worried about overspending, as well as progressives unhappy with where the money could go.

The deal announced Monday evening, which requires congressional approval, would increase spending caps by $320 billion relative to the limits prescribed in the 2011 Budget Control Act, whose spending-control provisions have been repeatedly waived since 2014. It also would suspend the debt ceiling and permit more government borrowing until July 31, 2021 -- after the next presidential election.

The compromise reportedly outraged Democrat Sen. Patrick J. Leahy, the ranking member of the Senate Appropriations Committee, who noted the bill would not block Trump from spending money on his proposed border wall.

"I'm worried the House is willing to give him far too much discretion to take money and move it anywhere he wants including a wall," Leahy, D-Vt., told The Washington Post. "So the way it is now I will not vote for it. . . . The other 99 can vote for it, I won’t." 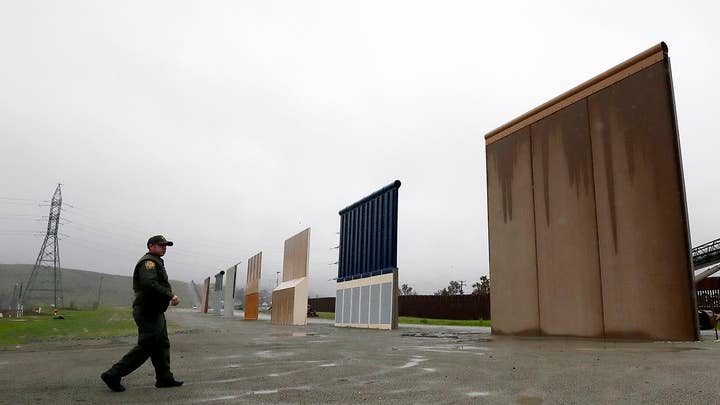 However, in a statement, Leahy later said he would "support the bill" because it "will raise the debt limit for the next two years and stave off economic catastrophe" and reverse "unsustainable cuts in non-defense discretionary spending."

Leahy added, "I understand there is a statement of principles between congressional leaders and the White House, and I have many concerns with its content."

In the end, domestic programs would on average receive 4-percent increases in the first year of the pact, with much of those gains eaten up by veterans increases and an unavoidable surge for the U.S. Census. Defense would jump to $738 billion next year, a 3-percent hike.

President Trump would retain flexibility to transfer money between accounts, raising the possibility of attempted transfers for building border barriers.

In response, North Carolina GOP Rep. Mark Walker tweeted out a picture of the Joker lighting a pile of money on fire, from the 2008 "Batman" film "The Dark Knight." ("All you care about is money," the Joker laments to a hardened career criminal as the money burns. "This town deserves a better class of criminal. And I'm going to give it to them.")

Kentucky Sen. Rand Paul, a Republican, called the deal a "huge mistake" because it gets rid of automatic spending cuts.

"It scraps the sequester, which is a huge mistake," Paul told Fox News. "It would be a huge mistake if the Republican leadership agrees to this."

WATCH: RAND PAUL TALKS ABOUT THE IMPACT OF ALL THIS GOVERNMENT SPENDING

"It would be a huge mistake if the Republican leadership agrees to this."

"I would blow them up," Perdue said. "Mandatory spending has blown through the roof."

Texas Republican Rep. John Cornyn told Fox News, "I wish we could address debt and deficit reduction. But it’s not going to happen on this deal."

Despite the mixed reception on Capitol Hill, the president and top congressional leaders were ebullient about the deal.

"I am pleased to announce that a deal has been struck with Senate Majority Leader Mitch McConnell, Senate Minority Leader Chuck Schumer, Speaker of the House Nancy Pelosi, and House Minority Leader Kevin McCarthy - on a two-year Budget and Debt Ceiling, with no poison pills," Trump tweeted.

"Poison pills" generally refers to undesirable attachments stuck onto budget bills, and in this context, Trump was likely referring to the fact that the budget compromise keeps the Hyde Amendment -- which bars government funding for most abortions -- intact. Additionally, the bill gives Trump latitude to fund border wall construction.

BIDEN FLIP-FLOPS ON HYDE AMENDMENT UNDER FIERCE PROGRESSIVE PRESSURE, AFTER SUPPORTING IT FOR DECADES

He added: "This was a real compromise in order to give another big victory to our Great Military and Vets!"

In a statement, Pelosi, D-Calif., and Schumer, D-N.Y., said the compromise deal will "enhance our national security and invest in middle class."

“Democrats are also pleased to have secured robust funding for critical domestic priorities in this agreement," they said. "Democrats have always insisted on parity in increases between defense and non-defense, and we are pleased that our increase in non-defense budget authority exceeds the defense number by $10 billion over the next two years.  It also means Democrats secured an increase of more than $100 billion in funding for domestic priorities since President Trump took office."

McConnell, for his part, said he "commended" Trump for seeing the deal through.

"I am very encouraged that the administration and Speaker Pelosi have reached a two-year funding agreement that secures the resources we need to keep rebuilding our armed forces," McConnell, R-Ky., said. "This was our top objective: Continuing to restore the readiness of our armed forces and modernize our military to deter and defend against growing threats to our national security. That includes investing in our facilities here at home, like Ft. Knox, Ft. Campbell, and the Blue Grass Army Depot, which my state of Kentucky is proud to host."

Democrats celebrated that, under the new deal, the domestic, non-military budget receives larger increases than the defense budget, when compared to last year. Democrats also lauded the deal's allocation of $2.5 billion for the 2020 Census, following the fierce battle over adding a citizenship question to the survey.

The deal also comes as budget deficits have been rising to $1 trillion levels — requiring the government to borrow a quarter for every dollar the government spends — despite the thriving economy and three rounds of annual Trump budget proposals promising to crack down on the domestic programs that Pelosi has been defending.

It apparently ignored warnings from fiscal conservatives saying the nation's spending has been unsustainable and eventually will drag down the economy.

"This agreement is a total abdication of fiscal responsibility by Congress and the president," said Maya MacGuineas, president of the Committee for a Responsible Federal Budget, a Washington advocacy group. "It may end up being the worst budget agreement in our nation's history, proposed at a time when our fiscal conditions are already precarious."

Prospects for an agreement, a months-long priority of McConnell's, came far brighter when Pelosi returned to Washington this month and aggressively pursued the pact with Treasury Secretary Steven Mnuchin, who was anointed lead negotiator instead of more conservative options such as acting White House Chief of Staff Mick Mulvaney or hardline Budget Director Russell Vought.

Mnuchin was said to have been eager to avert a crisis over the government's debt limit. There was some risk of a first-ever U.S. default in September, and that had added urgency to the negotiations.

McCarthy, the House Republican leader, conceded in a statement that "while this deal is not perfect, compromise is necessary in divided government."

"The Trump Administration and Congressional Republicans have undertaken an extraordinary rebuilding of America’s military," McCarthy said. "Given that sequestration cut defense spending more than non-defense, we are pleased that the agreement provides $20 billion more for defense than non-defense over two years."

"Furthermore, as Democrats continue to try to impose their radical policies on issues of life, border security, and presidential harassment, this deal locks out Democrat poison pills to must-pass funding bills," McCarthy concluded. "In particular, this deal maintains the Hyde Amendment and continues to grant the President the authority to keep our border and country safe."

Added Oklahoma Republican Sen. Jim Inhofe, who serves as chairman of the Senate Armed Services Committee: “I’ve said over and over again that we need a budget deal that prioritizes defense—and I am pleased this budget agreement does just that by providing predictability and much-needed growth to our defense budget."