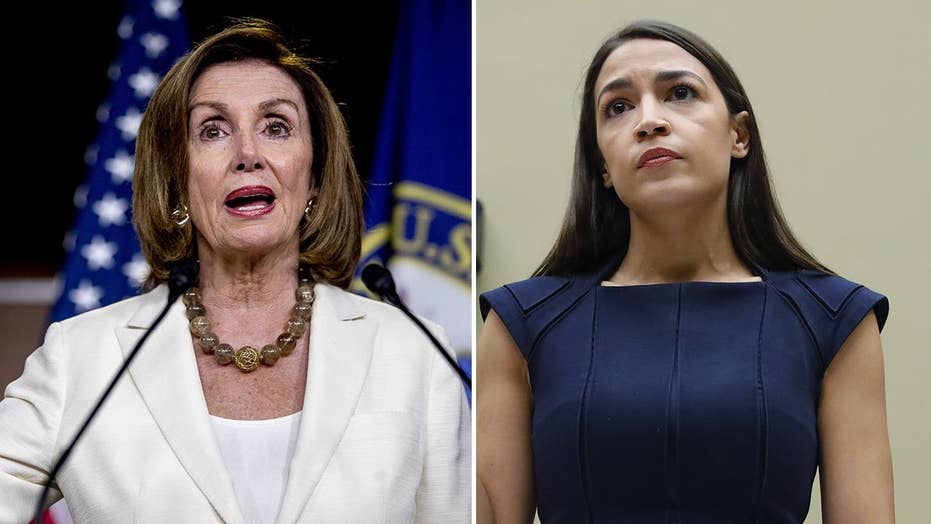 A battle between House Speaker Nancy Pelosi and progressive freshmen lawmakers is heating up amid the White House race.

President Trump’s fiery attacks against a group of left-wing freshman congresswomen have effectively united Democrats against the White House, just as an internal battle involving those same lawmakers was tearing the caucus apart.

But how long that unity will hold remains unclear -- with the key factor appearing to be whether their mutual disdain for the man in the Oval Office is enough to outweigh their now-very-public differences.

For now, it is. Trump started the firestorm Sunday by suggesting freshman Democrats “go back” to where they came from, though most of his intended targets were born in the U.S. He escalated those attacks Monday by saying some of those same lawmakers "hate" America, refusing to back down and denying the original comments were racist.

He made clear as well that he was speaking of lawmakers like Reps. Alexandria Ocasio-Cortez, D-N.Y., Rashida Tlaib, D-Mich., Ilhan Omar, D-Minn., and Ayanna Pressley, D-Mass. House Speaker Nancy Pelosi, in response, has rallied the Democratic caucus to their side, calling Trump's remarks "xenophobic" and inspired by a desire to "make America white again," and announcing a resolution to formally condemn them.

But this comes just days after the battle between Pelosi's allies and the four freshmen erupted into levels of animosity rarely seen inside the party tent.

The civil war escalated after the four congresswomen were the only ones to vote against a border relief bill passed by the House. Pelosi told The New York Times’ Maureen Dowd that while the "Squad" may have a strong social media presence, they are hardly influencers when it comes to legislation.

“All these people have their public whatever and their Twitter world,” Pelosi said. “But they didn’t have any following. They’re four people, and that’s how many votes they got.”

Ocasio-Cortez then accused Pelosi of “the explicit singling out of newly elected women of color,” in a Washington Post interview.

This prompted verbal retaliation from top levels of the party. A senior Democratic aide told The Hill that Ocasio-Cortez is “only a woman of color when it’s convenient,” and that she was “a puppet” of “elitist white liberals,” referring to Justice Democrats, the PAC that supports her. One senior Democratic source described Ocasio-Cortez as a "complete fraud" in an interview with Fox News.

The fighting reached a boiling point when the House Democratic Caucus used the "Squad's" own tactics and catchphrases against AOC Chief of Staff Saikat Chakrabarti for accusing Rep. Sharice Davids, D-Kan., of enabling “a racist system.” The Caucus’ Twitter account tweeted a screenshot with the message, “Who is this guy and why is he explicitly singling out a Native American woman of color?”

Pressley then told those in attendance at the Netroots Nation conference, “We don’t need black faces that don’t want to be a black voice.”

The battle within the party may end up being one for their very identity, at least as far as public opinion goes. Axios reports that top Democrats have been pointing to a poll that shows swing voters who oppose socialism are now viewing Ocasio-Cortez as the face of the party. The poll reportedly shows Ocasio-Cortez with a mere 22 percent favorable rating.

"If all voters hear about is AOC, it could put the [House] majority at risk," a top Democrat involved in 2020 congressional races told Axios. "[S]he's getting all the news and defining everyone else’s races.”

It is that impression – and Democrats’ current defense of the freshmen – that Trump is now hammering in the aftermath of his tweets. On Monday morning, he blasted the “Radical Left Congresswomen … and the terrible things they have said,” painting them as being anti-America and anti-Israel.

Omar and Tlaib have used strong language in opposition to Israel. Omar once said Israel has “hypnotized” the world into not seeing their “evil doings,” and in an interview published on Saturday, Tlaib accused Israel of “dehumanization and racist policies.”

The president is eager to latch the party itself to those kinds of comments, as he fights accusations of racism in response to his original tweets.

Trump went after the freshmen lawmakers again Monday afternoon, claiming that they "hate America" and saying that Omar in particular "hates Jews." He warned Democrats against letting them influence their direction: "If they want to gear their wagons against these four people, I think they're going to have a very tough election."

His original tweets had said "Democrat Congresswomen" should go back and fix the "corrupt" and "crime infested places" they came from and then "come back and show us how it's done."

The entire controversy, though, is causing some headaches for Trump with his own party, as sitting GOP lawmakers are starting to speak out against his rhetoric.

"There is no excuse for the president’s spiteful comments –they were absolutely unacceptable and this needs to stop," Sen. Lisa Murkowski, R-Alaska, tweeted.