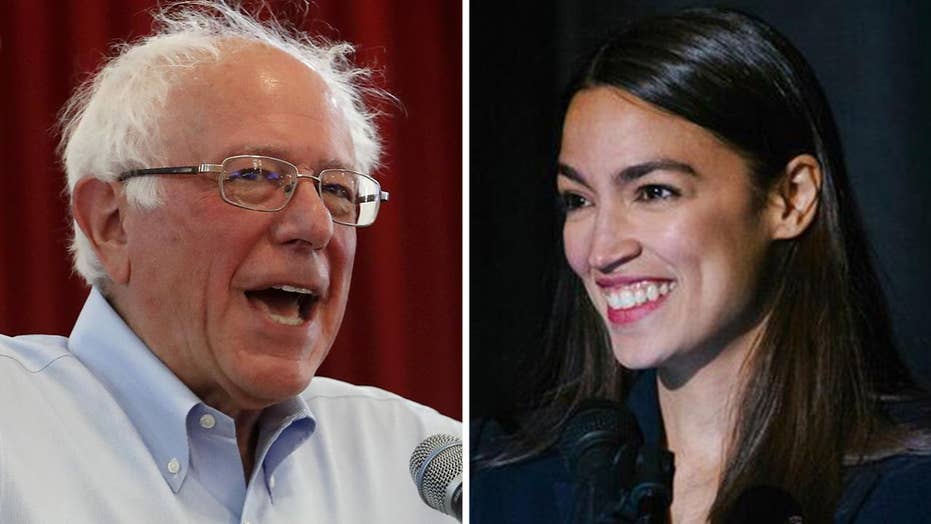 Former Trump EPA official Mandy Gunasekara says Rep. Ocasio-Cortez and Sen. Sanders are manufacturing a climate crisis in order to divert attention away from the positive things the Trump administration is doing.

Sen. Bernie Sanders, I-Vt., weighed in on the infighting that has been going on in the Democratic party recently, with House Speaker Nancy Pelosi trading barbs with freshman representatives led by New York's Alexandria Ocasio-Cortez.

In a recent New York Times interview, Pelosi was dismissive of the group known as the "Squad," which is made up of AOC, Rep. Rashida Tlaib, D-Mich., Rep. Ilhan Omar, D-Minn., and Rep. Ayanna Pressley, D-Mass. Ocasio-Cortez drew criticism for her response, which accused the speaker of taking aim at women of color. Sanders agrees that Pelosi has gone too far.

"I think a little bit," Sanders said Sunday when NBC's Chuck Todd asked if Pelosi was being too tough on them. Sanders, however, focused on the Squad's youth instead of their ethnicities.

"I think you cannot ignore the young people of this country who are passionate about economic and racial and social and environmental justice. You gotta bring them in, not alienate them," he said.

Sanders, who is vying for the 2020 Democratic presidential nomination, has courted younger voters with campaign promises such as canceling all student loan debt. He lauds the so-called Squad for doing the same.

President Trump backed Pelosi last week, after Ocasio-Cortez brought race into the discussion, saying the New York congresswoman had been "very disrespectful." The speaker did not support Trump when the president posted a series of tweets aimed at the squad, which focused on their nationalities.

"So interesting to see 'Progressive' Democrat Congresswomen, who originally came from countries whose governments are a complete and total catastrophe ... now loudly and viciously telling the people of the United States, the greatest and most powerful Nation on earth, how our government is to be run," Trump tweeted Sunday. "Why don’t they go back and help fix the totally broken and crime infested places from which they came."

Pelosi called Trump's remarks "xenophobic" and accused the president of having racist goals.

Trump's tweets on Sunday triggered a backlash from others in the Democratic party, including Tlaib and Ocasio-Cortez.