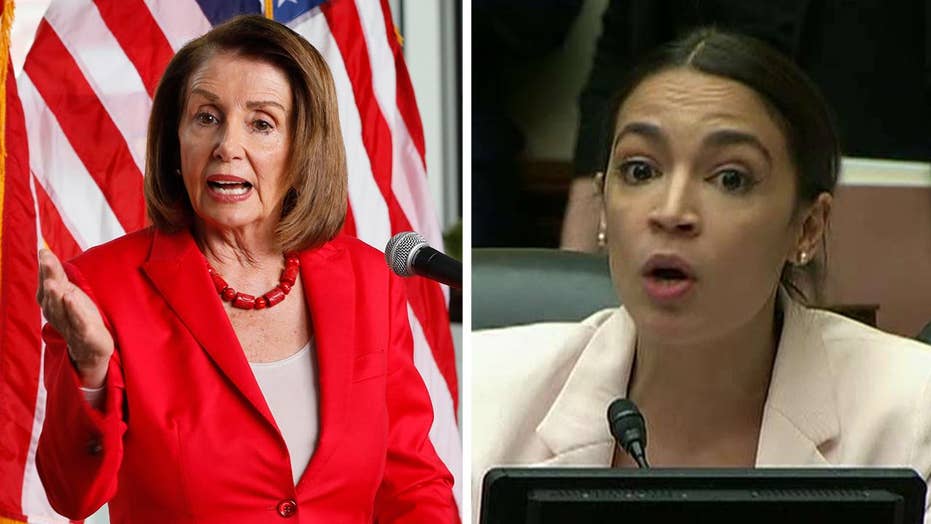 Feud between Speaker Pelosi and Rep. Ocasio-Cortez heats up in the House

Capri Cafaro and Terry Holt weigh in on Rep. Alexandria Ocasio-Cortez's recent comments insinuating that Speaker Nancy Pelosi doesn't respect her as a 'woman of color.'

Rep. William Lacy Clay, D-Mo., added to the mounting Democratic criticism of Rep. Alexandria Ocasio-Cortez, D-N.Y., slamming her "inappropriate" suggestion that House Speaker Nancy Pelosi, D-Calif., is singling out the New Yorker and her "squad" of fellow freshman because of their race.

"It tells you the level of ignorance to American history on their part as to what we are as the Democratic Caucus.

"It is so inappropriate. So uncalled for. It does not do anything to help with unity. It was unfair to Speaker Pelosi."

Clay continued his broadside, saying the comment exposed how much Ocasio-Cortez and Reps. Ilhan Omar, D-Minn., Rashida Tlaib, D-Mich., and Ayanna Pressley, D-Mass., have to learn when it comes to being "effective legislators".

"It’s going to take a process of maturing for those freshman members. They will have to learn to be effective legislators," he said.

"It shows their lack of sensitivity to racism. To fall back on that (trope) is a weak argument. It has no place in a civil discussion."

The lawmaker closed his remarks by suggesting the four freshmen could hurt Democratic chances in upcoming elections.

"It shows they have no sensibility to different members from our caucus. Some come from red districts and those are the ones who gave us the majority. We need them all," he said.

His comments followed a feud between Pelosi and freshman congresswomen, like Ocasio-Cortez, that involved racially-charged criticism.

Ocasio-Cortez's chief of staff, Saikat Chakrabarti, previously compared moderate Democrats to racists -- prompting Pelosi, at the request of some of her members, warn House Democrats not to attack each other on Twitter.

GINGRICH ON DEMS' INFIGHTING: AOC, OTHER FRESHMEN QUESTIONING WHY THEY NEED TO LISTEN TO PELOS

"You got a complaint?  You come and talk to me about it.  But do not tweet about our members and expect us to think that that is just ok," she reportedly said. On the same day of that caucus meeting, Ocasio-Cortez called out Pelosi for what she sees as the speaker continually targeting her and other freshmen lawmakers of color.

"Their ignorance is beyond belief," Clay also said while in the Speaker's Lobby, according to The Hill. Clay reportedly saw Ocasio-Cortez and her chief of staff as "juvenile."

Clay wasn't the only one to attack Ocasio-Cortez on Thursday. "The View" hosts Joy Behar and Whoopi Goldberg criticized her's and others' decision to attack Democrats like Pelosi. "I think this is more BS," Goldberg said of Ocasio-Cortez's comments on race.

Pelosi, meanwhile, refused to provide further comment on the feud while discussing it during her weekly press briefing.

“I've said what I'm going to say…What I said in the caucus yesterday had an overwhelming response from my members," she said.

"Because they know what the facts are and what we are responding to. We respect the value of every member of our caucus. The diversity of it all is a wonderful thing. Diversity is our strength. Unity is our power."