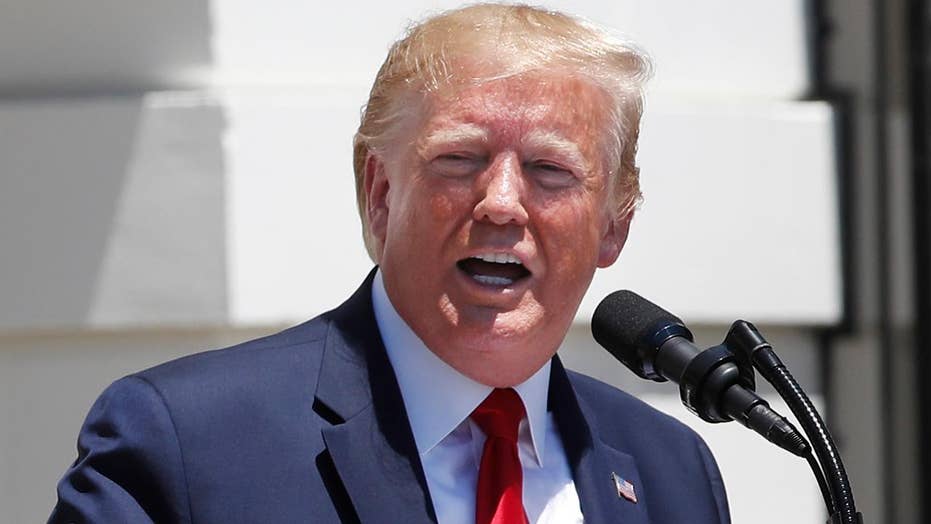 Trump: Progressive Democrats hate this country with a passion, they can leave if they want to

President Trump defends his tweets calling on Democratic congresswomen to 'go back' to where they came from during an exchange with the press at the White House.

President Trump doubled down Monday after taking heavy fire for inflammatory tweets calling on Democratic congresswomen to "go back" to where they came from -- even though most of his intended targets were born in America -- as he called on those same lawmakers to "apologize," alleged they "hate" America and chastised the party for defending them.

He continued: “These are people that hate our country. … They hate it, I think, with a passion.” 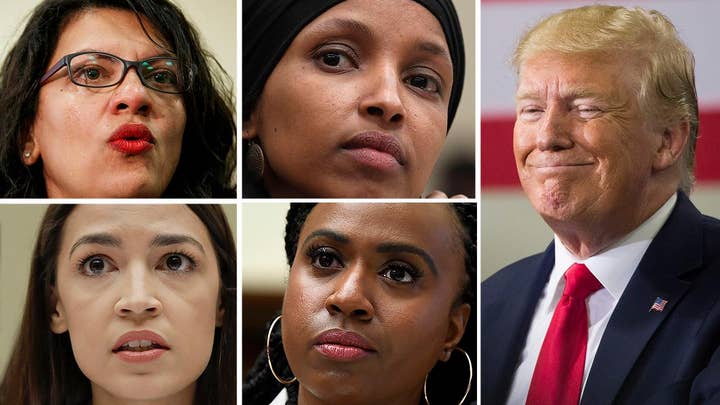 In a contentious exchange with the press at a White House economic event, Trump made clear that his criticism was aimed at freshman congresswomen like Reps. Ilhan Omar, D-Minn., and Alexandria Ocasio-Cortez, D-N.Y. He alleged Omar in particular “hates Israel, hates Jews” and even suggested she has “love” for enemies like Al Qaeda.

The comments escalate an already raging battle between Trump and congressional Democrats, with House Speaker Nancy Pelosi announcing a resolution to formally condemn his remarks she called "xenophobic."

"This weekend, the President went beyond his own low standards using disgraceful language about Members of Congress. ... The House cannot allow the President’s characterization of immigrants to our country to stand. Our Republican colleagues must join us in condemning the President’s xenophobic tweets," she said in a letter to colleagues on Monday.

Omar already had fired back, tweeting to Trump: "You are stoking white nationalism bc you are angry that people like us are serving in Congress and fighting against your hate-filled agenda."

While some Republicans were steering clear of the melee, Sen. Susan Collins, R-Maine, issued a brief statement saying the original Trump tweet should be removed: "I disagree strongly with many of the views and comments of some of the far-left members of the House Democratic Caucus – especially when it comes to their views on socialism, their anti-Semitic rhetoric, and their negative comments about law enforcement – but the President’s tweet that some Members of Congress should go back to the ‘places from which they came’ was way over the line, and he should take that down.”

The president showed no sign of backing down, however, firing off more tweets digging in overnight and into Monday morning.

"When will the Radical Left Congresswomen apologize to our Country, the people of Israel and even to the Office of the President, for the foul language they have used, and the terrible things they have said," Trump tweeted Monday. "So many people are angry at them & their horrible and disgusting actions."

He continued: "If Democrats want to unite around the foul language & racist hatred spewed from the mouths and actions of these very unpopular & unrepresentative Congresswomen, it will be interesting to see how it plays out. I can tell you that they have made Israel feel abandoned by the U.S."

Infighting between the Democratic establishment led by Pelosi and young progressives led by Rep. Ocasio-Cortez, D-N.Y., effectively paused Sunday when they united to condemn the president's Twitter broadside as racist. The offending tweets had said "Democrat Congresswomen" should go back and fix the "corrupt" and "crime infested places" they came from and then "come back and show us how it's done."

Those women, Ocasio-Cortez, Omar, Rep. Rashida Tlaib, D-Mich., and Rep. Ayanna Pressley, D-Mass., had recently been at odds with Pelosi, with Ocasio-Cortez accusing the speaker of targeting young women of color in Congress with dismissive comments she made in a New York Times interview.

But Pelosi came to their defense after Trump's tweets.

"When @realDonaldTrump tells four American Congresswomen to go back to their countries, he reaffirms his plan to 'Make America Great Again' has always been about making America white again," she tweeted Sunday. "Our diversity is our strength and our unity is our power."

Ocasio-Cortez also wrote Monday: "It’s important to note that the President’s words yday, telling four American Congresswomen of color 'go back to your own country,' is hallmark language of white supremacists. Trump feels comfortable leading the GOP into outright racism, and that should concern all Americans."

Of the four freshmen, only Omar was born outside the United States.

Trump appeared unbowed Sunday night, suggesting it was "so sad" to see Democrats sticking up for the lawmakers.

"So sad to see the Democrats sticking up for people who speak so badly of our Country and who, in addition, hate Israel with a true and unbridled passion. Whenever confronted, they call their adversaries, including Nancy Pelosi, 'RACIST,'" Trump tweeted. "Their disgusting language... and the many terrible things they say about the United States must not be allowed to go unchallenged."

He continued, "If the Democrat Party wants to continue to condone such disgraceful behavior, then we look even more forward to seeing you at the ballot box in 2020!"

Trump's mentions of Israel are likely in reference to multiple comments made by Omar, who was chastised by Republicans for tweeting messages with anti-Semitic tropes. The "disgusting language" may have been referring to Tlaib, who said upon taking office, "We're going to impeach the motherf-----."