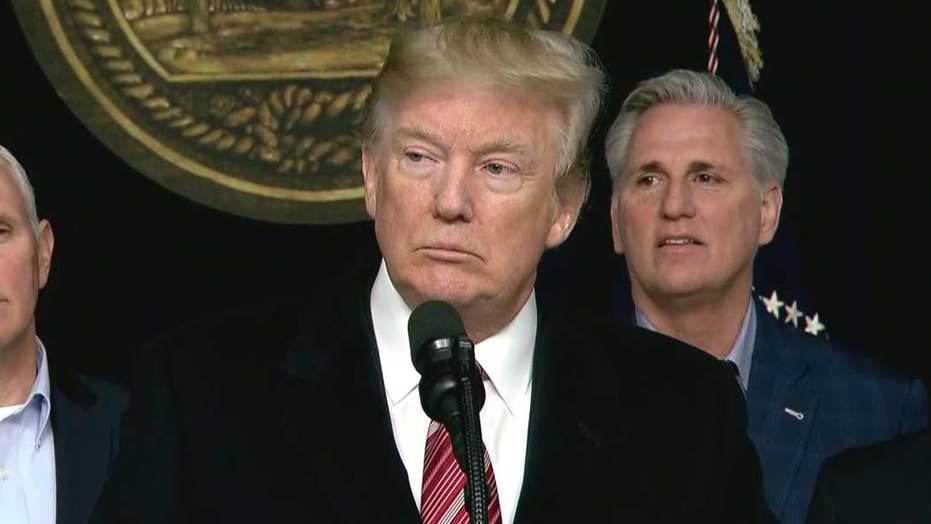 The president discusses his agenda for 2018.

In a wide-ranging press conference from Camp David on Saturday, Trump also said he plans to campaign for GOP congressional candidates, and looks forward to perhaps improving relations with the rogue nation of North Korea in 2018.

“We are very well prepared for the coming year. We finished strong,” Trump said at his weekend political retreat at Camp David, in snow-covered western Maryland.

The president, in a roughly 20-minute-long press conference, also spoke about the ongoing special counsel investigation regarding whether Trump or his associates colluded with Russia during the 2016 White House race.

"Everything I've done is 100 percent proper," Trump said. "That is what I do. I do things properly. … Just so you understand, there's been no collusion. There's been no crime."

Trump also repeatedly said he and Republican leaders of the GOP-controlled Congress are eager to work with Democrats on a range of issues, even suggesting that they would postpone welfare reform without Democratic support.

However, he appeared to sharpen his hard line on bipartisan immigration reform, saying he won’t extend protection for young illegal immigrants under the expiring, Obama-era DACA program unless Democrats agree to fund his U.S.-Mexico wall as part of a comprehensive plan that includes strengthening American borders.

“I hope we are going to work out our agreements with the Democrats,” Trump said. But “we want the wall. The wall’s not going to happen, we’re not having DACA.”

He then reiterated his claims that Mexico would pay -- in some way -- for the wall along the border.

The president also spoke about stopping the flow of drugs into the United States, an issue that until Saturday did not appear to be at the forefront of his 2018 agenda.

“Drugs are pouring into the country,” he said. “I think we are going to put a big dent into that.”

Trump was joined at the press conference by congressional Republicans, Cabinet secretaries and White House aides.

“From a right-center point of view, 2017 was the most consequential year since I’ve been in Congress,” said Senate Majority Leader Mitch McConnell, R-Ky. “I’m excited about the new year. I’m excited to get to work.”

During the press conference, Trump expressed optimism about peace on the Korean Peninsula, where North Korean leader Kim Jung Un continues to pursue a nuclear weapon and an intercontinental missile on which to launch it.

He suggested the talks between North Korea and U.S. ally South Korea about the North joining the upcoming Olympic Games were “a start” toward potential de-escalation.

“If something can come out of those talks, that would be a great thing,” he said.

Trump said he would join the 2018 campaign trail for Republican candidates, saying “we are going to be very involved.”