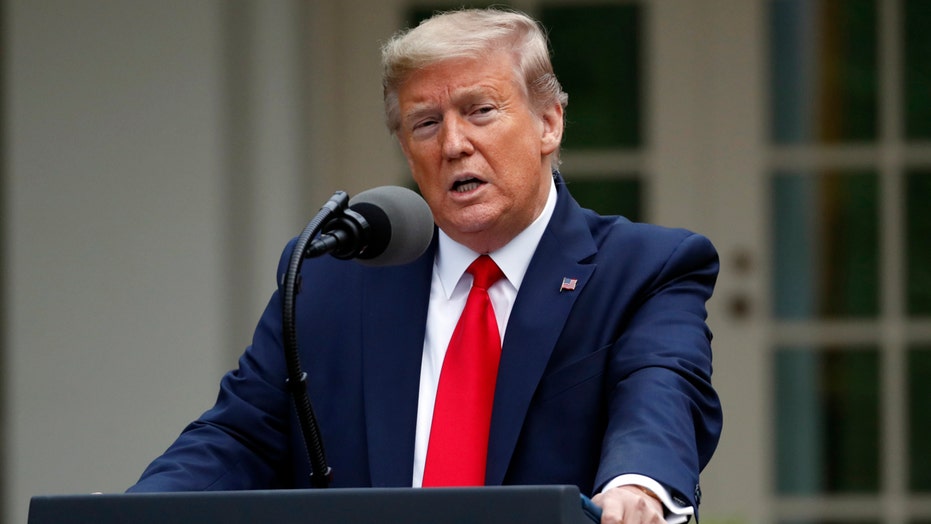 The WHO failed its basic duty and must be held accountable, says President Trump.

President Trump announced at the White House coronavirus news briefing in the Rose Garden on Tuesday that the United States will immediately halt all funding for the World Health Organization (WHO), saying it had put "political correctness over lifesaving measures."

Also at the briefing, the president said plans to ease the national economic shutdown were being finalized, and that he would be "authorizing governors to reopen their states to reopen as they see fit." At the same time, Trump made clear that he was not going to put "any pressure" on governors to reopen.

Trump read a long list of names of people in business, health care and sports who will advise him on how to restart the economy. "We have to get our sports back," Trump remarked. "I'm tired of watching baseball games that are 14 years old."

In the meantime, Trump declared that the United States would undertake a 60-to-90 day investigation into why the "China-centric" WHO had caused "so much death" by "severely mismanaging and covering up" the coronavirus' spread, including by making the "disastrous" decision to oppose travel restrictions on China.

The United States is the WHO's largest single donor, and the State Department had previously planned to provide the agency $893 million in the current two-year funding period. Trump said the United States contributes roughly $400 to $500 million per year to WHO, while China offers only about $40 million. The money saved will go to areas that "most need it," Trump asserted.

The United States is far ahead of other countries in contributions to the WHO this year. Although House Democrats suggested that cutting WHO funding is illegal, the fiscal year 2020 budget passed by Congress mandates the president provide only "necessary expenses, not otherwise provided for, to meet annual obligations of membership in international multilateral organizations.” The budget does not specifically guarantee the WHO any amount of funding. 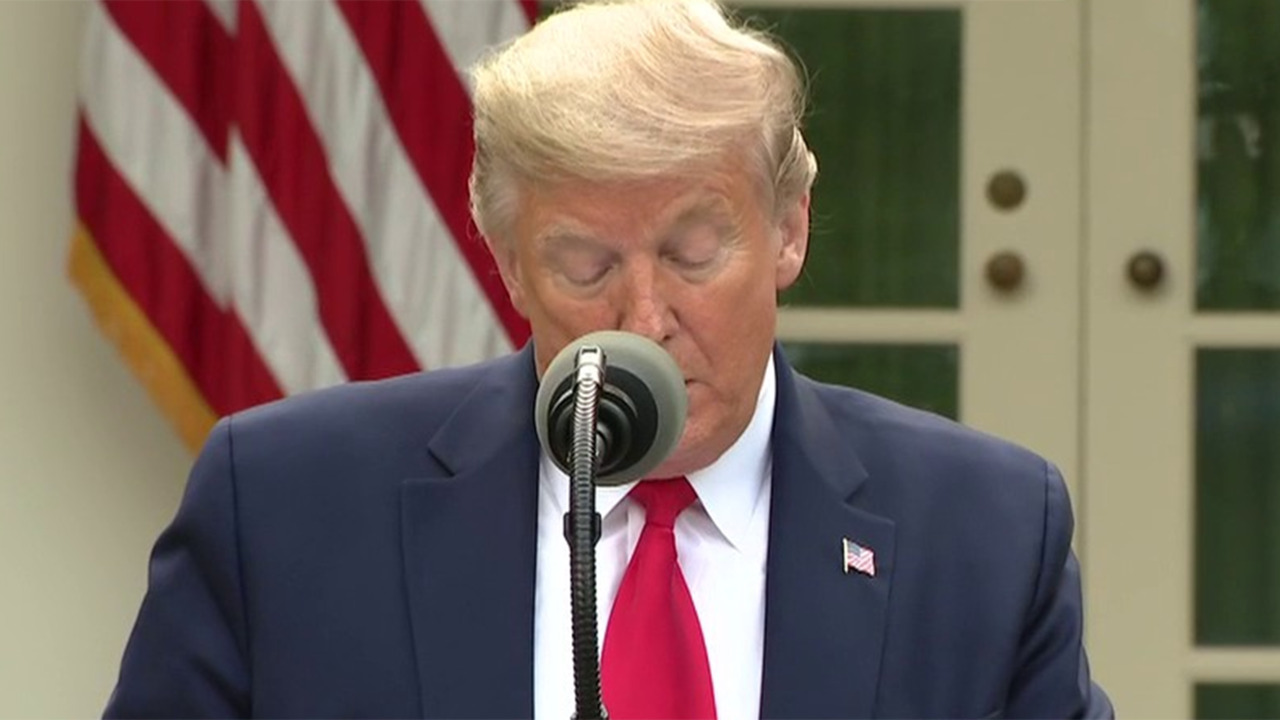 Trump: The scariest day of my life was when I was told we were short hundreds of thousands of ventilators

President Trump says he instructed his team to move 'heaven and earth'&nbsp;

As early as late December, Wuhan medical staff were suspected to have contracted the disease, indicating likely human-to-human transmissibility.

On January 4, in a statement first flagged by The National Review, the head of the University of Hong Kong’s Centre for Infection warned that “the city should implement the strictest possible monitoring system for a mystery new viral pneumonia that has infected dozens of people on the mainland, as it is highly possible that the illness is spreading from human to human."

The Chinese government also began suppressing news about the virus, and even detained Doctor Li Wenliang, who has since died of coronavirus after trying to warn the international community of the threat. Nevertheless, on January 8, the WHO declared: “Preliminary identification of a novel virus in a short period of time is a notable achievement and demonstrates China’s increased capacity to manage new outbreaks."

Again on January 14, the WHO simply echoed Chinese government statements:  “Preliminary investigations conducted by the Chinese authorities have found no clear evidence of human-to-human transmission of the novel coronavirus (2019-nCoV) identified in Wuhan, China.”

By January 19, the WHO had changed its tune somewhat, but still hedged. “Not enough is known to draw definitive conclusions about how it is transmitted, the clinical features of the disease, the extent to which it has spread, or its source, which remains unknown."

President Donald Trump speaks about the coronavirus in the Rose Garden of the White House, Tuesday, April 14, 2020, in Washington. (AP Photo/Alex Brandon)

Dr. Anthony Fauci, the top infectious disease expert in the U.S. and a key member of Trump's coronavirus task force, has said misinformation from China, repeated by the WHO, had affected U.S. response efforts.

Several media organizations had also uncritically cited WHO's assurances about the coronavirus.

The Washington Post even ran a story quoting a Chinese official asking for "empathy" and slamming the White House for acting "in disregard of the WHO recommendation against travel restrictions."

"I was the one person who wanted to do it," Trump said at Tuesday's briefing, referring to the border closure.

In March, The Post finally acknowledged that critics accused China and WHO of "covering up or downplaying the severity of an infectious disease outbreak."

Amid the pandemic, footage emerged of a senior WHO official cutting off an interview after a reporter implied Taiwan, which is not a WHO member state, is independent of China. The official, Canadian doctor Bruce Aylward, initially pretended not to hear the question before terminating the Skype call with the reporter.

"Once we have finally turned the page on this epidemic, there must be a time to look back fully to understand how such a disease emerged and spread its devastation so quickly across the globe, and how all those involved reacted to the crisis," the statement read. "The lessons learned will be essential to effectively address similar challenges, as they may arise in the future."

“Withholding funds for WHO in the midst of the worst pandemic in a century makes as much sense as cutting off ammunition to an ally as the enemy closes in," said Sen. Patrick Leahy, D-Vt.

Sen. Robert Menendez, D-N.J., has said recently that the agency needs more money during the pandemic.

“Given the WHO’s indispensable role, it is imperative that the United States increase contributions,” Menendez wrote in March.

Democrats have also pointed to Trump's comments praising the Chinese government's handling of the crisis as late as February 18. Biden advisers had made similar positive comments about China as the virus spread.

The White House has made accountability for international organizations a cornerstone of its policymaking. Earlier in his presidency, Trump successfully pushed other nations to contribute more to NATO, saying that international alliance was costing the United States an unreasonably large amount of money.

President Donald Trump takes questions from reporters as he speaks about the coronavirus in the Rose Garden of the White House, Tuesday, April 14, 2020, in Washington. (AP Photo/Alex Brandon)

As usual, the briefing Tuesday contained some flareups. At one point, Trump slammed CNN analyst and Playboy reporter Brian Karem as a "loudmouth" and even threatened to leave the briefing, as Karem refused to stop screaming questions even after his microphone had been cut off and another reporter had begun speaking.

"I told them when they put this guy here, it's nothing but trouble," Trump said. "He's a showboat. If you keep talking, I'll leave, and you can have it out with the rest of these people."

The president also shut down a reporter who insisted on mentioning that he was graciously asking a question for a colleague who couldn't be in attendance.