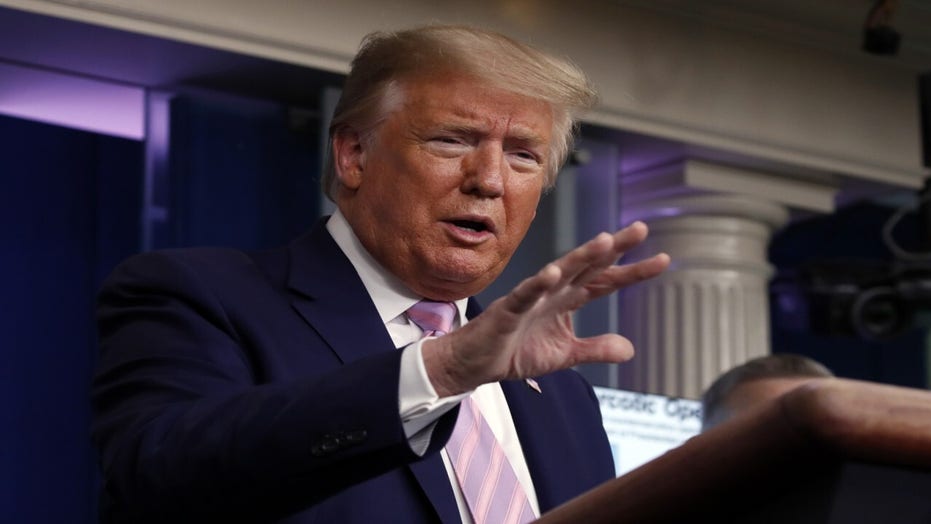 Trump says US will not let cartels, criminals, terrorists and other malign actors exploit coronavirus crisis

President Trump -- flanked by Attorney General Bill Barr, Secretary of Defense Mark Esper and top military officials at the White House coronavirus briefing -- announced on Wednesday a massive new "counternarcotics operation" in the Eastern Pacific Ocean and Caribbean Sea to "combat the flow of illicit drugs into the United States."

"We must not let the drug cartels exploit the pandemic to threaten American lives," Trump said. "In cooperation with the 22 partner nations, U.S. Southern Command will increase surveillance, disruption and seizures of drug shipments and provide additional support for eradication efforts, which are going on right now at a record pace."

Included in the force package are Navy destroyers, other combat ships, Air Force surveillance planes and helicopters, and ten Coast Guard cutter ships, Trump said, noting that the new forces would double U.S. interdiction capacity in the region -- and help slow the spread of the coronavirus by reducing illicit travel.

Gen. Mark Milley, the chairman of the Joint Chiefs of Staff, said the United States had obtained intelligence that cartels were seeking to "take advantage" of the coronavirus to smuggle drugs. Asked about the intelligence later in the briefing, Trump called it strong but wouldn't elaborate.

"We came upon some intelligence some time ago that the drug cartels as a result of COVID-19 were gonna try to take advantage of the situation and try to infiltrate additional drugs into our country," Milley remarked. "As we know, 70,000 Americans die on an average annual basis to drugs. That's unacceptable. We're at war with COVID-19, we're at war with terrorists, and we are at war with the drug cartels, as well."

"This is the United States military. You will not penetrate this country," Milley continued matter-of-factly. "You will not get past Jump Street. You are not going to come in here and kill additional Americans."

The other assembled officials echoed his message.

"Every year, tens of thousands of Americans die from drug overdose, and thousands more suffer the harmful effects of addiction," Esper said. "Furthermore, corrupt actors, like the illegitimate Maduro regime in Venezuela, rely on the profits derived from the sale of narcotics to maintain their oppressive hold on power."

Esper said he wouldn't disclose how long the new force posture would last, but that an interagency team would regularly brief the president.

Barr called the situation a "national security threat," and said the U.S. was not interested in "half-measures."

The outbreak of COVID-19 has sent the price of heroin, methamphetamines and fentanyl soaring, as the likes of the Sinaloa cartel – and its main rival, the Jalisco “New Generation” – struggle to obtain the necessary chemicals to make the synthetic drugs, which typically come from China and are now in minimal supply.

“The cartels have suffered from COVID-19 due to the inability to get the regular shipments of synthetic opioids and precursor chemicals for the massive production of meth from China,” Derek Maltz, a former special agent in charge of the Drug Enforcement Administration (DEA) Special Operations Division in New York, told Fox News this week.

“The cartels have continued their production at a slower rate, but the demand seems to be increasing during these times of uncertainty in America. The shutdown of cities in China and travel in and out of China have also negatively impacted the flow of chemicals and drugs to Mexico.”

China, where the virus originated late last year, has, for the most part, halted production on the chemicals required for the making of the drugs as it battles the virus within its own borders and battles to make medical supplies for other crumbling countries.

“Drug cartels and criminal support organizations in the industry global drug trafficking have been deeply affected by the pandemic of the COVID-19,” Johan Obdola, president of the Canada-based Global Organization for Intelligence (IOSI), concurred. “Especially when it comes to the operations of the Sinaloa Cartel, which control 90 percent of the entrance of synthetic drugs to the United States.”

Obdola underscored fentanyl, which originates from China, has become the most coveted cartel commodity in recent weeks.

“In China, according to the Drug Enforcement Agency (DEA), around 5,000 illegal drug laboratories have been processing synthetic drugs and chemicals to process them. Most of these drugs have Europe and North America as the main markets,” he continued. “Cartels bring synthetic drugs through food exports, fruits, automotive equipment, toys and other products that are allocated in an extensive distribution network across the United States. COVID-19 has generated a huge loss in regarding any illegal drugs, and specifically synthetic drugs, not only to Mexican cartels but to most drug cartels operating worldwide.”