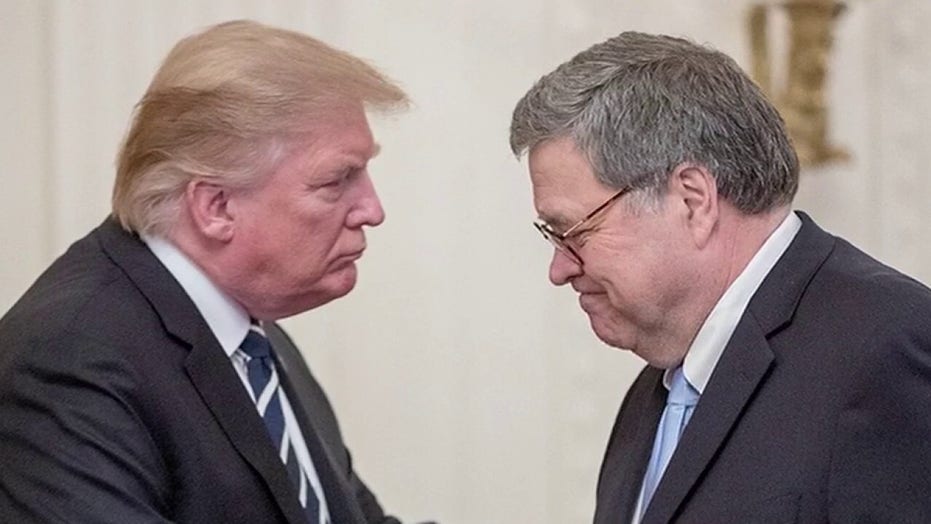 DOJ says reports that Barr might resign are 'Beltway rumors'

The Department of Justice says Attorney General Bill Barr has no plans to resign over President Trump's tweets; Garrett Tenney reports from Washington.

The Trump administration is establishing a new section within the Justice Department to deal with the process of removing citizenship from foreign-born individuals who fraudulently obtained citizenship by failing to disclose past convictions for serious crimes -- including terrorism and war crimes.

The section, which will be within the DOJ’s Office of Immigration Litigation, will be dedicated to denaturalizing those who had failed to disclose they had been involved in criminal activity on their N-400 form for naturalization. It requires the government to show that citizenship was obtained illegally or "procured by concealment of a material fact or by willful misrepresentation."

That form includes questions asking whether an applicant has been involved in genocide and torture among other serious crimes, if they have ever been part of a terrorist or totalitarian organization, if they had been associated with the Nazi government in Germany, and if they have been charged or convicted with a crime or served prison time. Targets for denaturalization are those who have made material breaches of those questions.

“When a terrorist or sex offender becomes a U.S. citizen under false pretenses, it is an affront to our system -- and it is especially offensive to those who fall victim to these criminals,” Assistant Attorney General Jody Hunt said. “The new Denaturalization Section will further the Department’s efforts to pursue those who unlawfully obtained citizenship status and ensure that they are held accountable for their fraudulent conduct.”

The department has seen an increase in such cases both because of an increased effort by U.S. Citizenship and Immigration Services (USCIS) to root out fraud, as well as Operation Janus -- an operation which began during the Obama administration and that identified hundreds of thousands of cases where paper fingerprint data was not entered into the centralized fingerprint database.

Officials have pointed to recent cases whereby the DOJ has secured the denaturalization of terrorists, war criminals and sex offenders. They include:

The department has filed 228 civil denaturalization cases since 2008, and 94 since 2017. Officials say it has increased its filing rate by 200 percent in the past three years and has seen an increase in referrals by over 600 percent.

Such denaturalization proceedings are not targeted at people who commit crimes after they become citizens, only those who have made fraudulent citizenship applications and left out crimes they committed on that form. A number of cases involve those who were initially denied entry to the U.S. or removed from the country, only to re-enter under a false identity.

Citizens cannot be deported, but those who have been stripped of citizenship revert back to permanent residency status, which allows deportation or barring of entry from the U.S. in the case of serious criminal offenses.