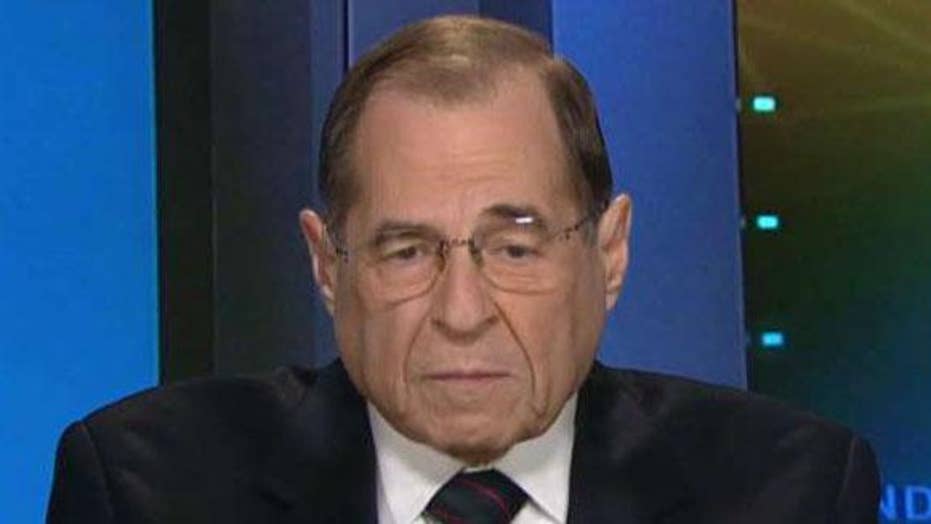 Rep. Jerry Nadler on whether Democrats plan to keep investigating Trump no matter what's in the Mueller report

House Judiciary Chairman Jerry Nadler, D-N.Y., speaking to "Fox News Sunday," vowed that congressional investigators will press on and continue to investigate President Trump while warning of a possibly unfolding Justice Department "cover-up," even as he acknowledged that Special Counsel Robert Mueller has closed his investigation without indicting a single American for illegally colluding with Russia.

A foundational reason for the launch of the high-profile Mueller probe nearly two years ago was to investigate and prosecute any improper collusion by members of the Trump campaign with Russia, but a senior Justice Department official confirmed on Friday that no new indictments would be coming out of Mueller's office.

"All we know is that the special counsel -- what we think we know -- is that the special counsel is not bringing criminal indictments for collusion," Nadler told host Chris Wallace. "There are other investigations going on which he’s farmed out, the Southern District of New York, Eastern District of Virginia, and they may or may not. We do know, remember, in plain sight, of a lot of collusion.

"We know for example that the president’s son and his campaign manager were present in the meeting with the Russians, to receive information which they were told in the invitation was part of the Russian government's attempt to help them in the election," Nadler said. "We know that the campaign manager gave political targeting data to an agent of the Russian government. So we know a lot of things and maybe it’s not indictable, but we know there was collusion. The question is the degree."

DEMS CIRCLE THE WAGONS DURING FUNEREAL CONFERENCE CALL, AS SENIOR SENATOR ADMITS TRUMP SUPPORTERS MAY HAVE BEEN RIGHT ABOUT MUELLER PROBE

Rep. Doug Collins on whether the end of the Mueller probe lifts the cloud over the White House

A former senior law enforcement official told Fox News on Saturday, however, that Democrats lack key investigative powers that Mueller had, including the ability to convene grand juries -- and that Nadler's path amounted to trying to criminalize meetings with foreign actors that the special counsel apparently determined were simply not criminal.

“With all the talk of the Democrats intensifying their House investigations," the former official said, it was important to note that "unlike Special Counsel Mueller, Congress and the [DOJ Inspector General] cannot convene grand juries and initiate prosecutions. If Mueller couldn't find collusion or conspiracy with every investigative tool, what do the Democrats expect to accomplish?"

Nor was the Trump team the only campaign to interact with foreign nationals in 2016. Hillary Clinton's campaign and the Democratic National Committee (DNC) hired the firm Fusion GPS, which employed Britsh ex-spy Christopher Steele to produce an anti-Trump dossier that the FBI used to justify the surveillance a top Trump aide -- even as text messages exclusively obtained by Fox News this week revealed that the DOJ seemingly raised "repeated" concerns that Steele, whose anti-Trump views are now widely known, was politically biased. The Trump aide, Carter Page, has not been charged with any wrongdoing, although the FBI initially alleged he had conspired with Russians.

House Judiciary Committee ranking member Doug Collins, R-Ga., in his own interview with "Fox News Sunday," also emphasized that Nadler was unlikely to uncover anything Mueller could not.

"As we’ve seen in the first two months of this Congress, [Democrats] really don’t have a policy agenda," Collins said. "They have an agenda against the President. They have an agenda to try and win 2020. And so what we’re seeing is they think that they can go into the Judiciary Committee or any other committee and have a limited budget, limited subpoena power, limited staff and go up against and investigation that lasted 22 months, had unlimited power, unlimited subpoena power, had plenty of investigators -- and they think they can find something more than what they did, then I think they’re sadly mistaken."

Collins added: "At this point, the president has been proved right. I think he was obviously frustrated during this time and rightfully so, as this report seems to show."

His remarks echoed that of Senate Judiciary Committee member Chris Coons, a Democrat, on Saturday during a conference call: "I think it's entirely possible," Coons said, that the day the report is released "will be a good day for the president and his core supporters."

"At this point, the president has been proved right."

Nadler, however, implied that Mueller may have found important evidence against Trump -- and said that normal DOJ rules preventing the disclosure of such information after an investigation should not apply.

"The Justice Department believes -- normally that’s a very good rule. If you don’t have enough evidence to judge someone on a crime, you shouldn’t sully their name. However, the Justice Department believes that as a matter of law, the president no matter what the evidence, can never be indicted on anything because he is the president. ... Once you say that a president cannot be held indictable no matter what the evidence, as a matter of law, to then follow the principle that you can’t then comment on the evidence or publicize it is to convert that into a cover-up."

He added: "If president cannot be indicted because as a matter of law -- then the only way a president can be held accountable is for Congress to consider it an act if warranted, and Congress can only do that if it has the information. For the department to take the position that, we’re not going to give information because he’s not indicted, like a normal person, he’s not indicted because a lack of evidence, is equivalent to a cover-up."

But Collins later criticized Nadler's push for a total release of the report, saying some reasonable limits need to be accomodated.

"It’s amazing to hear my chairman say that he wants everything out there," Collins said. "Well, I would ask my chairman does he include classified information, which has never been released to the American public? Would he include 6C, which is grand jury information, things that are normally never released to the public outside – really, outside of a special order from the court? Would he want to do the things that would actually get into ongoing investigations? I think the problem is that Democrats and my chairman have a problem. They thought that this report was going to show something they could impeach the president on. That is not seemingly going to happen."

Nadler separately took a shot at Trump for his criticisms of the intelligence community as hopelessly biased. Senior members of the FBI investigative team who probed Trump's campaign have since been fired or resigned following the revelations that they exchanged numerous anti-Trump text messages during the campaign (even as thousands of other texts were deleted by what the agency called a "glitch"), surveilled a Trump campaign aide using a warrant that relied heavily on a politically biased source working for a firm hired by the Clinton campaign, and illegally leaked information to the media without authorization.

"It is part of a sustained attack by the administration and its allies on the integrity of law enforcement agencies, the FBI, the special prosecutor, for the last two years to try to undermine the integrity and the credibility of our law enforcement institutions, and that’s something that’s very damaging to the country," Nadler said, referring to Trump.