Former Trump campaign chairman Paul Manafort has been accused of sharing polling data during the 2016 presidential election with a business associate allegedly linked to Russian intelligence -- and then lying about it to prosecutors.

Special Counsel Robert Mueller’s team said Manafort “lied about sharing polling data with Mr. Kilimnik related to the 2016 presidential campaign.” The accusation was revealed by mistake in a defense filing Tuesday after the information wasn’t properly redacted as intended.

The filing sheds light on Manafort’s ties to Konstantin Kilimnik, a Russian-Ukrainian businessman who was charged last year with tampering with potential witnesses. The U.S. claims Kilimnik is linked to Russian intelligence, which is accused of leading the election interference effort in 2016, but he denies those ties.

It remained unclear if the polling information Manafort allegedly shared was public or private, though it raises speculation that the data could have been used by the Russians to interfere in the election in an effort to support Trump’s candidacy. 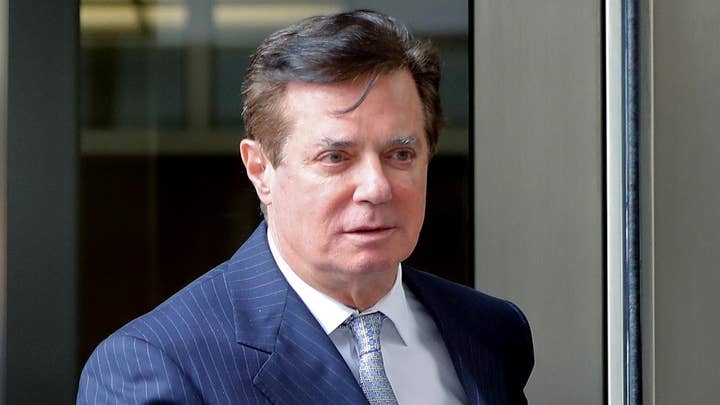 This is the first time prosecutors with Mueller’s team have accused President Trump’s associate of being in touch with a Russian contact in relation to the presidential election.

Manafort has long been in the crosshairs of the Mueller team, having been charged early on in the Russia investigation. He pleaded guilty last year to conspiracy charges in Washington and faces sentencing in a separate case in Virginia, though none of the charges are directly concerned with the alleged collusion between the Kremlin and the Trump campaign.

The defense filing on Tuesday was supposed to refute the claims by the special counsel that Manafort lied to Mueller’s team despite agreeing to cooperate. Prosecutors say Manafort violated their plea agreement by lying, but his defense insists it wasn’t intentional and that his mistakes were due to illness, exhaustion and extensive questioning from investigators.

Manafort’s lawyers say he’s suffering from anxiety and depression, lacks contact with his family, and had little time to prepare for hours-long questioning by the investigators.

“These circumstances weighed heavily on Mr. Manafort’s state of mind and on his memory as he was questioned at length,” the lawyers wrote.