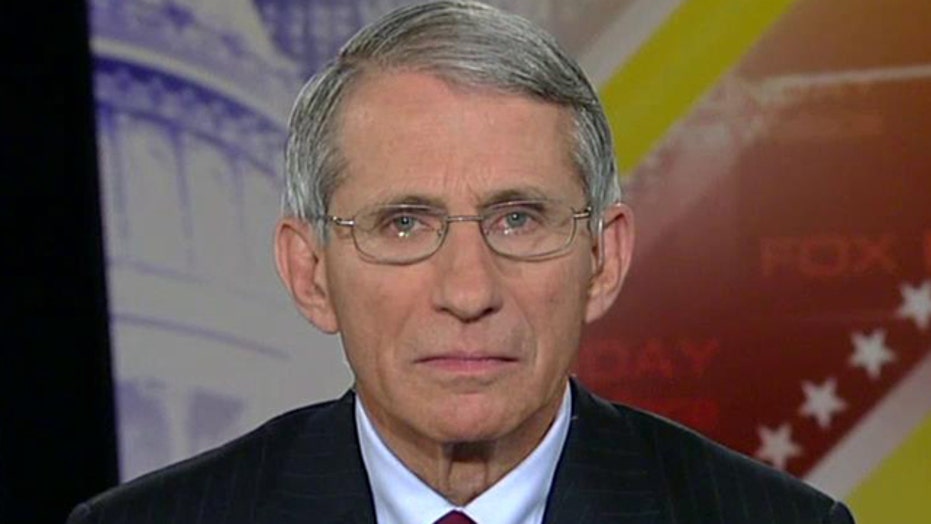 Gov't doing everything it can to contain Ebola in America?

Dr. Anthony Fauci, head of the National Institute of Allergy and Infectious Diseases, weighs in

The United States’ top infectious-disease doctor suggested Sunday that more people inside the country will be diagnosed with Ebola but dismissed as “far-fetched” concerns about somebody bringing the deadly disease across the U.S.-Mexico border in a bio-terror attack.

Dr. Anthony Fauci, the director of the National Institute of Infectious Diseases, told “Fox News Sunday” that 50 people inside the country are now being monitored for the deadly virus and that the country’s first confirmed patient, Thomas Eric Duncan, is back in critical condition at Texas Health Presbyterian Hospital, in Dallas.

“I would not be surprised if somebody who has close contact with Mr. Duncan actual contracted Ebola,” said Fauci, who also repeated his faith in the U.S. health care system in being able to prevent an outbreak.

The recent outbreak of Ebola started in West Africa and has killed more than 3,400 people this year in the region.

The 42-year-old Duncan went last week to the Dallas hospital. He was mistakenly sent home, despite revealing he was visiting from Liberia, before returning by ambulance days later.

Ten of the 50 people being monitored for Ebola are considered high risk. Among them are four people who came in close contact with Duncan.

Fauci was highly skeptical about the argument that the contagious virus, transmitted through direct contact with a victim’s bodily fluids, could be brought across the southern U.S. border, which illegal immigrants have routinely crossed over for years without detection.

“I wouldn’t be worried about an illegal immigrant coming across the border,” he told Fox News.

Fauci also downplayed the threat the virus could be used as a bio-terror weapon.

“That would be ineffective,” he said.

Also Sunday, officials said a homeless man being sought because of possible contact with Duncan was found in Texas after several hours of searching.

The person is not considered to be one of the 10 people who definitely had contact with Duncan. However, he is part of a larger group of 38 people who may have been around Duncan when he was showing symptoms of the disease, officials said.

He was found a few hours after officials on Sunday morning announced he was missing, Dallas city spokeswoman Sana Syed said.

Dallas County Judge Clay Jenkins called the man, whom he didn't identify, a "low-risk individual." Authorities had monitored him a day earlier but want to take his temperature regularly to make sure he doesn't have a fever, a possible symptom of Ebola infection.

Jenkins said the man would receive a mental health evaluation at Dallas' Parkland Hospital. The man will eventually be placed in housing that give allow health workers direct access to him daily. Syed said it was unlikely that the man would be placed in a homeless shelter.

Meanwhile, Fauci's appeared to remain opposed to closing U.S. points of entry to travellers from the Western Africa countries hit by the Ebola, saying such a move would impede the "in and out" of supplies and personnel, with the potential to unravel those governments.

However, Centers for Disease Control and Prevention Director Dr. Tom Frieden on Sunday made clear he was open to any reasonable suggestion that could help swiftly resolve the international health crisis.

He told ABC's "This Week" that he's open to any "workable" suggestion that "won't backfire" or increase the risk of infection.