Rep. Rashida Tlaib, D-Mich., has accused Israeli forces of targeting Palestinian children and families after a bloody weekend in the bitter conflict.

Tlaib leveled the accusation while responding to criticism of a New York Times headline that read: “Gaza Militants Fire 250 Rockets, and Israel Responds With Airstrikes.”

Yousef Munayyer, a pro-Palestinian campaigner, tweeted out a screenshot of the headline, which he called “stunningly irresponsible and misleading.”

Tlaib joined in, writing: “When will the world stop dehumanizing our Palestinian people who just want to be free? Headlines like this & framing it in this way just feeds into the continued lack of responsibility on Israel who unjustly oppress & target Palestinian children and families. #FreePalestine.” 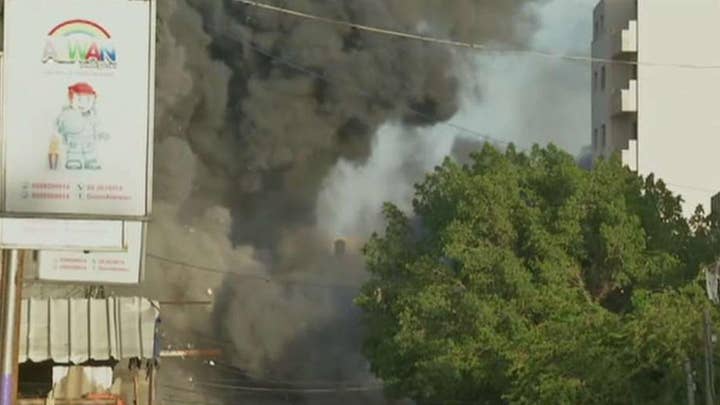 Reaction to the tweet was mixed, with some expressing their support of the sentiment while others critiqued the congresswoman’s language.

The comments came as the Israeli military lifted protective restrictions on residents in southern Israel on Monday, while Gaza's ruling Hamas militant group reported a cease-fire deal had been reached to end the deadliest fighting between the two sides since a 2014 war.

The escalation had killed 23 on the Gaza side, both militants and civilians, while on the Israeli side four civilians were killed from incoming fire.

The intense fighting over the past two days came to a halt in the early morning hours and residents on both sides went back to their daily routines. The Israeli military said that as of 7 a.m., "all protective restrictions in the home front will be lifted."

MORE THAN 600 ROCKETS FIRED AT ISRAEL FROM GAZA IN LESS THAN 24 HOURS, DEATH TOLL RISES

An explosion caused by an Israeli airstrike on a building in Gaza City, Saturday, May 4, 2019. (AP Photo/Khalil Hamra)

Schools and roads had been closed, and residents had been encouraged to remain indoors and near bomb shelters as intense rocket fire pounded the area, threatening to devolve into all-out war.

Israel and Hamas are bitter enemies and have fought three wars and numerous smaller battles since the Islamic militant group seized Gaza in 2007.

In the latest fighting, which erupted over the weekend, Palestinian militants fired hundreds of rockets into Israel, while the Israeli military responded with airstrikes on some 350 militant targets inside Gaza, including weapons storage, attack tunnels and rocket launching and production facilities.

It also deployed tanks and infantry forces to the Gaza frontier, and put another brigade on standby. A Hamas commander involved in transferring Iranian funds to the group was killed in an airstrike, in an apparent return to Israel's policy of "targeting killing" of militant leaders.

Palestinian medical officials reported 23 deaths, including at least nine militants as well as two pregnant women and two babies. The four Israeli civilians killed were the first Israeli fatalities from rocket attacks since the 50-day war in 2014.