U.S. Rep. Rashida Tlaib, D-Mich., once said her fear of Americans after the Sept. 11, 2001, terror attacks pushed her to be more involved in politics and her community.

Tlaib, a Palestinian-American lawmaker who first drew national attention with a profane call for the impeachment of President Trump soon after she took office in January, made her comments in a clip filmed for Makers, a media company that tries to “accelerate the women’s movement through stories of real-life experiences that ignite passion and action.”

In the video, filmed months ago as part of the “Maker of the week” segment which is currently featured prominently on the outlet's homepage, Tlaib said she was “afraid” of her fellow Americans after the terror attacks that killed nearly 3,000 people.

“I was probably my second year in law school when 9/11 happened. And I was -- I was really terrified of what was going to happen to my husband, who's only a green card holder at the time,” she said.

“I immediately called my brothers and told them to be very careful who you hang out with, telling my sisters, you know, just be real careful out there, and being really afraid of my fellow Americans.”

“I immediately called my brothers and told them to be very careful who you hang out with, telling my sisters, you know, just be real careful out there, and being really afraid of my fellow Americans.”

She added that the attack and the fear pushed her toward public service and becoming more involved in her community.

“It really pushed me to be more involved, and I got really curious and really angry. And I think that combination got me, you know, in front of a number of issues in the city of Detroit,” she said.

Tlaib has been facing criticism not only for her calls for Trump’s impeachment but also for making troubling comments concerning Israel, with some comments perceived as anti-Semitic, and associating with far-left figures that have endorsed Lebanon-based Hezbollah and Palestinian terrorist groups.

One of America’s oldest Jewish organizations, the Zionist Organization of America, called on Wednesday for Tlaib's removal from congressional committees and from the Democratic Party for her “anti-Israel record” and ties to “terrorists, anti-Semites and conspiracy theorists.”

“She calls Israel a ‘racist country’ on the basis of the lie that Israel discriminates against those ‘darker skinned,’ supports the destruction of Israel in favor of an Arab-dominated state (‘It has to be one state’), ‘absolutely’ backs withholding U.S. aid from Israel, and openly supports the Boycott, Divestment, and Sanctions (BDS) movement, which is committed to international ostracism and weakening of Israel with a view to its eventual elimination.” 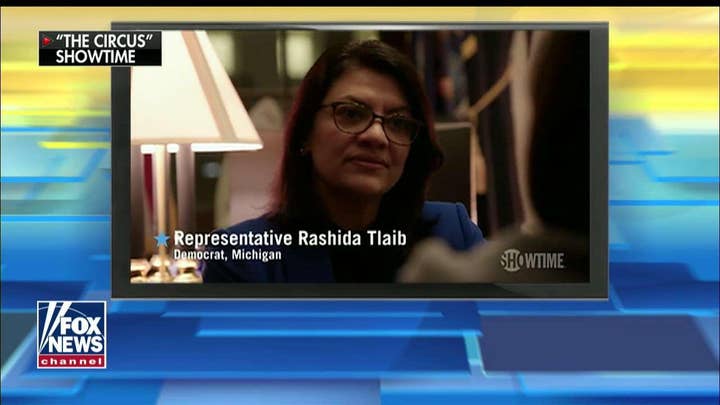 The same article includes a list of people with whom Tlaib has been photographed, or about whom Tlaib has posted social media messages, and includes information about their alleged links to bombings or other crimes.

“It is perfectly clear that Rashida Tlaib is not in the smallest degree ashamed, and has not the slightest inhibition about, being publicly being associated with these anti-Semites, terrorists and glorifiers of Jew-murderers," ZOA National President Morton A. Klein and Chairman Mark Levenson said in a joint statement.

“The Democratic Party must do the only honorable thing," they continued, "which is to expel her from the party and remove her from Congressional committees."