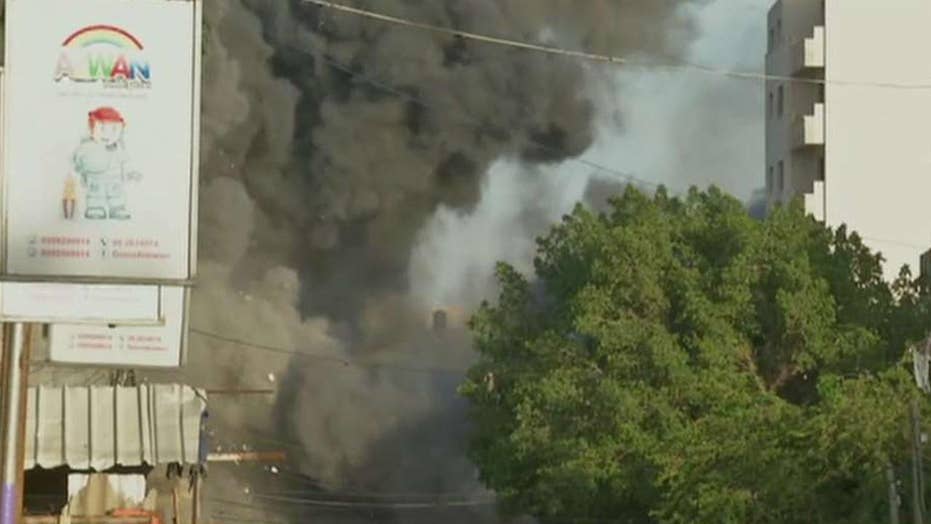 The death toll continues to rise Sunday on both sides of the Israel-Gaza border in one of the most intense flare-ups of violence in the region in years, shattering a month-long lull in attacks.

Palestinian militants in the Gaza Strip fired more than 600 rockets into southern Israel in less than 24 hours, killing at least four Israelis and leaving several more in critical condition.

Israel has retaliated with dozens of airstrikes against militant sites in Gaza. More than a dozen Palestinians, including a pregnant woman and her 14-month old niece, have also been killed.

According to Haaretz, four Israeli men and 16 Palestinians were killed so far since tensions increased along the border on Friday. Four Israelis were also wounded as rockets fell on the Israeli south on Saturday.

President Trump reacted Sunday night on Twitter: “Once again, Israel faces a barrage of deadly rocket attacks by terrorist groups Hamas and Islamic Jihad. We support Israel 100% in its defense of its citizens... To the Gazan people — these terrorist acts against Israel will bring you nothing but more misery. END the violence and work towards peace - it can happen!”

On Sunday, the Israeli military said a misfired Palestinian rocket — not an Israeli airstrike — caused the death of a pregnant Palestinian woman and her infant niece in the Gaza Strip, disputing the Gaza Health Ministry's statement that Israel is to blame.

Israeli medical officials said an early morning rocket from Gaza Sunday killed an Israeli father of four, 58-year-old Moshe Agadi, outside a home in the coastal city of Ashkelon.

Agadi reportedly died of his injuries after he was struck by shrapnel, marking the first Israeli casualty from rocket fire since the 2014 war with Hamas militants.

According to The Barzilai Medical Center in Israel, a 49-year-old man was killed when a rocket hit an Ashkelon factory, while another man in Israel was killed when his vehicle was hit by a projectile near a small border community called Yad Mordechai.

By late afternoon, the Israeli military said militants had fired more than 600 rockets into Israel, and that Israeli forces had launched about 260 airstrikes against militant targets in Gaza.

Palestinian officials identified one of the militants who was killed as Hamas commander Hamed al-Khoudary, who Israel said was integral in transferring Iranian money to the militant group.

In Israel, sirens warning of incoming attacks were heard along the border region overnight and throughout the day. Schools were canceled and roads were closed as many Israelis reportedly hid in bomb shelters.

According to Haaretz, the Israeli army said it expects the flare-up to continue in the coming days. A Hamas political source told the news outlet that the group decided to take serious steps against Israel because the Israeli government has been slow in implementing understandings reached between the two parties.

In Gaza, large explosions thundered across the blockaded enclave throughout the night and plumes of smoke rose into the air.

One of the airstrikes hit a commercial and residential building that housed the office of Turkey’s official Anadolu news agency.

The Israeli military said its Iron Dome defense system intercepted more than 150 of the projectiles from Gaza, but several still managed to get through.

The sudden violence has ended a month-long lull as Egyptian mediators had been trying to negotiate a long-term cease-fire.

Israel and Hamas are bitter enemies that have fought three wars since 2007 when the Islamic militant group seized control of Gaza. There have been also been several smaller flare-ups, most recently, in late March.