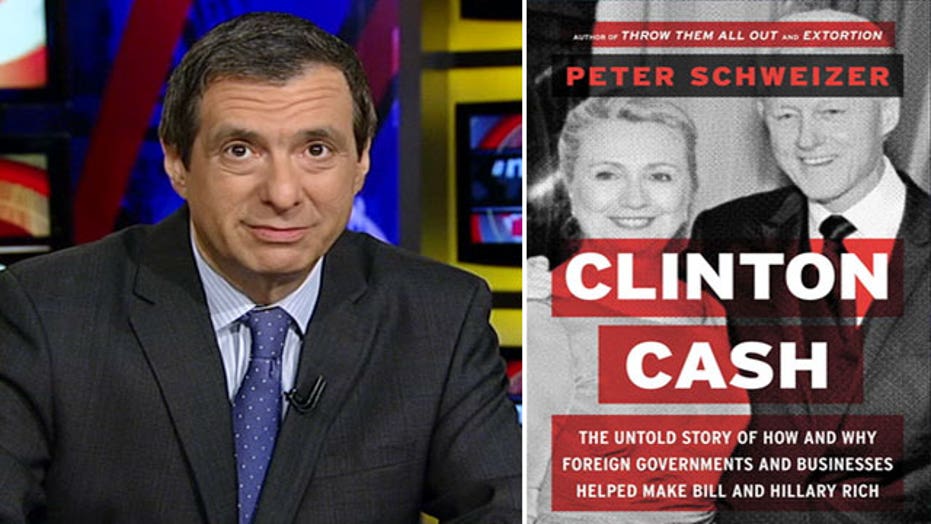 Hillary Clinton could soon be missing the days of Chipotle coverage, if a new book lands with a major splash.

The book raises questions about finances and favor-seeking at the Clinton Foundation, which I’ve long felt is an area of vulnerability for the former secretary of State.

And while Hillary defenders will dismiss the book because it’s written by a conservative, major news organizations—the New York Times, the Washington Post and Fox News—are taking it seriously. The Times, which broke news of the book yesterday, says the organizations have “exclusive” arrangements to pursue certain story lines. And Fox is planning a special Friday night anchored by Bret Baier.The forthcoming book “asserts that foreign entities who made payments to the Clinton Foundation and to Mr. Clinton through high speaking fees received favors from Mrs. Clinton’s State Department in return,” says the Times.

It’s called “Clinton Cash: The Untold Story of How and Why Foreign Governments and Businesses Helped Make Bill and Hillary Rich.” The author is Peter Schweizer, who works for the conservative Hoover Institution, is president of the Government Accountability Institute, has written for the Breitbart website and was a consultant for Sarah Palin and for George W. Bush’s White House speechwriting office. (The book is being published by HarperCollins, which is owned by News Corp., the sister company of 21st Century Fox, whose holdings include Fox News.)

Schweizer has written for major newspapers and worked with such outfits as “60 Minutes” in the past, so it will be hard to write him off as a drive-by hatchet man.

Hillary Clinton deflected a question about the book in New Hampshire yesterday, saying: "We're back into the political season therefore we will be subjected to all kinds of distraction and attacks and I'm ready for that."

Michael Clemente, Fox News’ executive vice president for news, said in a statement that the network has the television exclusive to report on “Clinton Cash,” “as all major news outlets have done for decades with a multitude of books. There is no exclusive arrangement to ‘pursue story lines’ — we have conducted our own independent research and reporting on the contents of the book. This was the same process we used in securing an advance copy of ‘13 Hours’ and ‘Things That Matter,’ which were both the subject of one-hour Fox News documentaries.”

The Post quoted its national editor, Cameron Barr, as saying the paper struck a non-financial agreement with Schweizer because “we are always willing to look at new information that could inform our coverage. Mr. Schweizer’s background and his point of view are relevant factors, but not disqualifying ones. What interests us more are his facts and whether they can be the basis for further reporting by our own staff that would be compelling to our readers.”

It’s undeniably true that news organization regularly make such arrangements with publishers, and such outfits as Pro Publica, and insist on doing their own reporting before putting their brand behind the end product. That means they may treat an author’s research as a starting point for their own digging.

So has Schweitzer uncovered any smoking guns? According to the Times:

“His examples include a free-trade agreement in Colombia that benefited a major foundation donor’s natural resource investments in the South American nation, development projects in the aftermath of the Haitian earthquake in 2010, and more than $1 million in payments to Mr. Clinton by a Canadian bank and major shareholder in the Keystone XL oil pipeline around the time the project was being debated in the State Department.”

I’ve long felt that people, organizations and foreign governments don’t hand over cash to the foundation just to be philanthropic. This isn’t to denigrate the fine work that the Clinton Foundation does around the world. But there’s no getting around the fact that many donors have been trying to curry favor, first with the secretary of State and now with a potential president.

I haven’t read the book, but the question in my mind is this: How clear-cut is the case that specific favors were in effect traded for specific donations? Put another way, will the narrative be simple enough for cable television debates, or just generate more noise?

Remember, our whole political culture is built on the notion that people give money to politicians (or their PACs) and usually hope to get something in return, even if it’s just greater access. When it crosses a line—as happened with former Virginia governor Bob McDonnell, and as prosecutors say happened with New Jersey Sen. Robert Menendez—it becomes illegal.

In a campaign, though, all that counts is that the revelations be politically damaging. And the Hillary campaign is trying to swat down the book in advance.

"It appears that this book is being used to aid [a] coordinated attack strategy, twisting previously known facts into absurd conspiracy theories,” says campaign spokesman Brian Fallon. “It will not be the first work of partisan-fueled fiction about the Clintons' record, and we know it will not be the last."

But are these absurd conspiracy theories? All spinning aside, we will soon find out whether or not Schweizer has the goods.