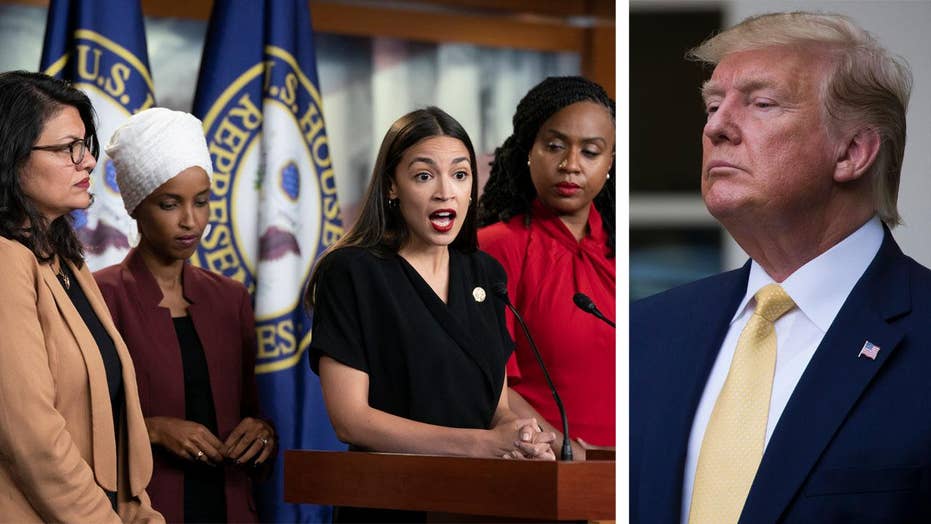 House votes to condemn Trump remarks made toward four congresswomen

The four progressive congresswomen who are currently in a nasty feud with President Trump offered a not-so-subtle warning to House Speaker Nancy Pelosi, D-Calif, the next time she "singles them out."

Reps. Alexandria Ocasio-Cortez, D-NY, Rashida Tlaib, D-Mich, Ilhan Omar, D-Minn, and Ayanna Pressley, D-Mass, often referred to as "The Squad," sat down with "CBS This Morning" host Gayle King on Tuesday as the House voted to formally condemn Trump over tweets that Democrats labeled as racist.

King asked the congresswomen if they've been in contact with Pelosi.

"Our teams are in communication," Ocasio-Cortez responded.

"But shouldn't you be meeting face-to-face?" King asked.

"She's the new member, not the speaker," Tlaib interjected. "She has every right to sit down with her at any moment, any time with any of us. She is Speaker of the House. She can ask for a meeting to sit down with us for clarification."

King followed up with Ocasio-Cortez, asking if she was "interested in having a conversation" with Pelosi, which Ocasio-Cortez responded, "Absolutely."

Last week, the four congresswomen had an ongoing public spat with Pelosi, which got very heated after Ocasio-Cortez suggested that the speaker was "singling out" them because they were "women of color." Pelosi previously dismissed their vocal opposition to the House's approval for border funding.

Their feud, however, seemed to have evaporated on Sunday after Trump targeted them on Twitter, suggesting they should "go back" to the countries they came from despite how three of the four congresswomen were born in the U.S. and all four of them are U.S. citizens.