Richard Fowler, Guy Benson and Howard Kurtz weigh in on the growing divide in the Democratic Party and who is really controlling the narrative.

The public spat between Rep. Alexandria Ocasio-Cortez, D-NY, and Speaker Nancy Pelosi, D-Calif, got a lot nastier on Wednesday, with the freshman congresswoman suggesting that the speaker is "singling out" her and her colleagues based on their race.

However, a feud between Pelosi and the quartet escalated after Congress passed a border funding bill that the four young Democrats opposed. Pelosi discussed the bill, and those in her party who oppose it, in an interview last weekend. She told the New York Times: "All these people have their public whatever and their Twitter world, but they didn’t have any following. They’re four people, and that’s how many votes they got."

Ocasio-Cortez said to The Washington Post on Wednesday that the "persistent singling out" by the Speaker may be more than "outright disrespectful." 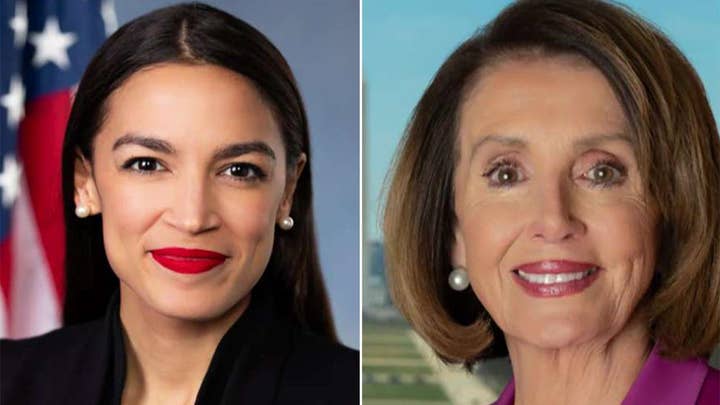 "When these comments first started, I kind of thought that she was keeping the progressive flank at more of an arm’s distance in order to protect more moderate members, which I understood,” Ocasio-Cortez said.

“But the persistent singling out . . . it got to a point where it was just outright disrespectful . . . the explicit singling out of newly elected women of color.”

In an earlier interview with The New Yorker Radio Hour, Ocasio-Cortez accused Congress of using  women and minorities as "bargaining chips."

"When it comes to women of color in Congress, particularly the freshman, it's that we both have encountered and represent communities that have been auctioned off and negotiated off for the last 20 years. And we're over it," Ocasio-Cortez said Tuesday.

"We see in these negotiations all the time--- it's like fighting for black communities or policies that help women. They're bargaining chips. And they're the first chips that are reached for in any legislative negotiations."

On Wednesday, Pelosi also delivered a stern message to her caucus, telling House Democrats: "You got a complaint? You come and talk to me about it. But do not tweet about our members and expect us to think that that is just okay."