The Texas border city of McAllen says more than 7,000 COVID-positive migrants have been released into the city since February, and more than 1,500 in the past week -- the latest example of growing concern about the potential impact of the border crisis on efforts to control COVID-19 in the U.S.

In a statement announcing the building of new temporary shelters to deal with a "rapidly escalating" surge of immigrants being released into the border city, McAllen warned of the release of thousands of migrants with COVID-19.

"Since mid-February of 2021 there have been over 7,000 confirmed COVID-19 positive immigrants released into the city of McAllen by [Customs and Border Protection], including over 1,500 new cases in the past seven days," the statement said.

Immigrants released by CBP are dropped off with Catholic Charities and tested for COVID by a third party. If they test positive, they are asked to quarantine and offered a room at a quarantine site.

The stunning numbers come amid increasing concerns from Texas and elsewhere about the potential impact of the massive numbers of migrants coming to the border on the efforts to control the COVID-19 pandemic within the United States.

Sen. Ted Cruz, R-Texas, cited the numbers announced by McAllen as he tore into the Biden administration for its handling of the crisis at the southern border.

"That is unacceptable and they keep doing it," Cruz said on "America Reports" on Wednesday. "Joe Biden likes to talk about this pandemic, well I’ll tell you what, the election of Joe Biden and Kamala Harris was a super spreader event because their open border is endangering not just the people of Texas but people all across the country."

There were more than 188,000 migrant encounters in June, and that number is expected to rise above 200,000 in July -- the highest number in decades. While single adults and some migrant family units are being expelled by Title 42 public health protections, unaccompanied children and migrant families with young children are being processed and released into the U.S.

In June, while there were more than 55,000 family units encountered at the border, less than 9,000 were expelled by Title 42. However, despite pressure from left-wing groups to end Title 42 altogether, the Centers for Disease Control and Prevention (CDC) extended the order this week. 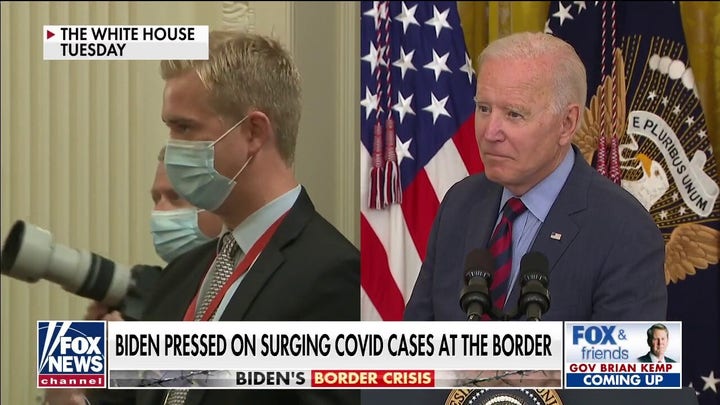 An effort by Texas Gov. Greg Abbott to order law enforcement to pull over vehicles carrying migrants to stop COVID-19 spread was blocked temporarily by a judge on Tuesday in response to a Justice Department lawsuit.

The Biden administration has blamed "root causes" like poverty and violence for the surge, has resumed some limited return flights for those ineligible for asylum and is reportedly planning on vaccinating migrants coming across the border or being deported.

But as new restrictions pop up across the country, particularly in response to the rise of the delta variant, and the numbers of migrants encountered at the border keeps spiking, Republicans are likely to keep putting pressure on the Biden administration over the contrast between its COVID-19 efforts and its border policy.

Florida Gov. Ron DeSantis on Wednesday cited the border as he responded to what he saw as Biden "singling out" Florida.

"Why don't you do your job? Why don't you get this border secure? And until you do that, I don't want to hear a blip about COVID from you," the Republican governor said.