EXCLUSIVE: Survivors of the 2017 Republican baseball practice shooting are appealing to FBI Director Christopher Wray to publicly declare the attack a case of domestic terrorism and say they never accepted that it was "suicide by cop."

The issue came to light last week when Ohio Republican Rep. Brad Wenstrup brought it up during a House Intelligence Committee hearing. He told Wray, who was not in charge of the FBI at the time of the attack, that the designation was unfair to survivors and failed to speak to the heroism of responding officers who thwarted the active shooter and saved all lives but that of the gunman.

He later sent a letter to the FBI formally requesting a review of the designation.

On June 14, 2017, a man armed with an SKS rifle and a 9mm handgun opened fire at a baseball practice where 24 Republican members of Congress and over a half-dozen other people had gathered the day before their annual fundraising ballgame against the Democratic team.

Investigators later identified him as an anti-Trump, anti-Republican supporter of Bernie Sanders who frequently bashed the GOP on social media and had written numerous letters railing against conservatives to his hometown newspaper in Illinois.

He’d been living out of his van, parked near the scene of the attack in Alexandria, Va., for nearly two months.

And before getting his guns from the vehicle, he asked Ron DeSantis, then a Florida congressman, and Rep. Jeff Duncan, R-S.C., whether the practice was being held by Republicans or Democrats.

Survivors had been told during an FBI briefing in November 2017 that the bureau had designated the attack as "suicide by cop," several members of Congress, aides and others in attendance told Fox News.

"We all said that’s not accurate," said Matt Mika, a Tyson Foods lobbyist who coaches the Republican team and was shot in the chest and arm.

He declined to reference the gunman by name when recounting the incident, although it has been widely published, saying, "We don’t use his name."

Suicide by cop, Mika said, involves provoking the police – as he said happened at the Capitol last month when Noah Green, a fanatical supporter of Nation of Islam leader Louis Farrakhan, drove into a police barricade and attacked officers with a knife.

Democrats and Republicans gather at second base for a prayer prior to the start of the Congressional baseball game with the house chaplain leading the way on June 15, 2017 in Washington, DC.  (Jonathan Newton / The Washington Post via Getty Images)

But the police presence at the congressional baseball practice was nearly invisible – with plainclothes officers in then-House Majority Whip Steve Scalise’s security detail sitting in an unmarked vehicle.

SCALISE 3 YEARS AFTER SHOOTING: 'I WOULDN'T BE HERE IF IT WASN'T FOR THE BEST OF WHAT POLICING IS'

"He went there to kill Republicans, and he had a list of Republicans in his pocket," Scalise told Fox News on Thursday. "He specifically asked if that was the Republican practice before he went back and got his guns and came out. He didn't know the security detail with me were cops, because they were plainclothes officers."

He called the FBI’s designation "disturbing."

"And it's not fair to the police officers who were involved that day, both Capitol Police, as well as the Virginia police, who acted bravely and heroically doing their jobs," he said.

Scalise also noted that other agencies had publicly declared the assassination attempt an act of domestic terror, including the Department of Homeland Security and prosecutors in Alexandria.

"The truth is this guy had a list in his pocket with Republican members of Congress listed on it and basically had a people to kill list," Ryan Thompson, a former Marine and chief of staff to then-Rep. Joe Barton, told Fox News Thursday on his way home from coaching Little League practice. "That's not suicide by cop. That's an attempted assassination."

He was standing next to Mika when the gunfire erupted. A bullet struck his friend in the chest. After helping him find cover, he said he got into his car and contemplated running over the attacker while counting the bullets in his head.

"This guy seemed to have unlimited ammunition," he said. "He was doing magazine changes… another example of how this wasn’t a suicide by cop. He was there to inflict a maximum amount of pain and death."

He said he saw Mika struck by a second bullet, then saw the gunman shoot Capitol Police Special Agent Crystal Griner, who was a member of Scalise’s security detail.

"She got shot in the ankle -- and then Alexandria PD shows up and boom, he goes down," he said. "I ran over to him. They just rolled him over. They're about to put handcuffs on him. He was still breathing. He looked me in the eye, and I told him the worst thing I could think of at that moment while he was still alive: I told him that his soul was going to go to Hell for all of eternity for what he had done to my friends."

After that, with adrenaline pumping and his military training switched on, he secured the SKS until Alexandria police took it, he said.

"Then I went back to Matt Mika, who had by this point turned gray," he said. "He had no color. He had lost so much blood, his eyes were yellow. And I, I saw into his chest, he had a big hole in his chest. They cut his clothes off already. And I thought that that was the last time I was going to see my friend."

Both Scalise, who was shot in the hip with a round from the SKS, and Mika nearly died. Officer Griner and Zach Barth, an aide to Texas Rep. Roger Williams, had also been shot. Other people sustained injuries unrelated to the gunfire.

And the attack did not appear at all designed to commit suicide by cop, according to several survivors who spoke with Fox News Thursday.

"He was, in his elderly, civilian way, moving tactically, avoiding fire," Thompson said. "He wasn’t stepping out into the open and letting the cops take their shots."

The gunman took cover in a dugout and then behind a shed as he battled police for roughly 10 minutes.

Several survivors told Fox News that they felt the FBI was attempting to downplay the political factor in an attempt to ease national tensions and that many of them vocally objected to the decision during the 2017 briefing and were offended by it. The bureau refrained from announcing the conclusion to the public, and it came to light last week during the House Intel hearing.

Four years after the politically-motivated attack, Mika has regained the function but not the feeling in his left hand, and Rep. Scalise is still attending physical therapy in an effort to learn to run again.

The FBI did not immediately respond to a question about whether the incident would be reclassified. A spokesperson said Wednesday that it had received Rep. Wenstrup’s request that it do so but declined to comment.

The congressman, who is also a doctor and Army reservist who helped treat victims at the scene, said he never had an opportunity to speak with contemporaneous acting FBI Director Andrew McCabe about the designation. He brought it up last week because that was the first time Wray sat before the committee.

While the FBI director made no commitment to revisit the case, he appeared receptive to doing so during Wenstrup’s questioning. And even two Democrats on the committee, Reps. Jackie Speier, D-Calif., and Jim Cooper, D-Tenn., urged him to act.

Wenstrup and Wray also spoke privately during a break, the congressman said.

"I said, 'I was hoping when you became director that a lot of things will get cleared up,'" he said. "They have."

The survivors are hoping that the designation of the shooting on June 14, 2017 will soon be cleared up too.

"Stick to law enforcement, stick to investigations, be honest about what you find and let the cards fall where they may," Thompson advised. "Don't try and massage a political situation. You’re not a political organization." 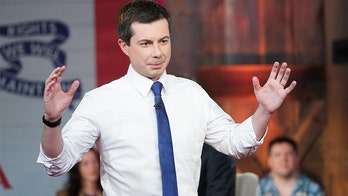