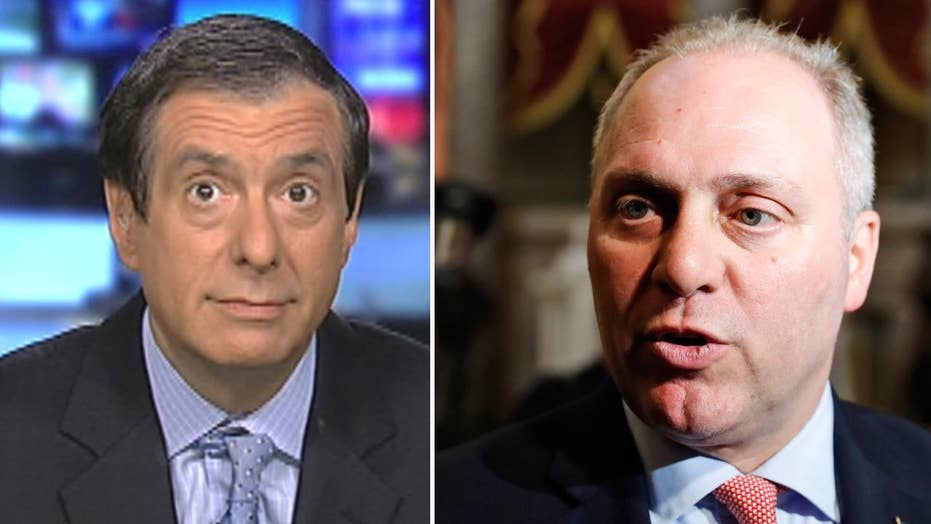 The shooting at a Republican baseball practice yesterday was chilling in so many ways—and I instantly realized that some would try to exploit the tragedy.

For me, it’s not just that I know several of the lawmakers there and that the gunman opened fire in nearby Alexandria.

It’s not just the shock that House Majority Whip Steve Scalise and four others could be wounded while engaging in a harmless sporting event.

It’s that the outcome would have been so much worse if brave Capitol Police officers had not been there to return fire and kill the gunman, and they were there because Scalise, a member of the leadership, was one of the players. “They saved everyone’s life…It would have been a massacre,” Rand Paul said.

That reminded me of the Gabby Giffords shooting six years ago, and how exposed members of Congress are as they go about their political activities and their daily lives.

But it also reminded me of how that shooting was immediately politicized, with some in the media absurdly trying to link it to Sarah Palin because she had put crosshairs on a political map of targeted Democrats. I denounced the effort that very day, and figured it wouldn’t be long before the same thing happened in this case.

We didn’t have long to wait. Chris Collins, a Republican congressman from New York, told WBEN radio within hours: “I can only hope that the Democrats do tone down the rhetoric. The rhetoric has been outrageous—the finger-pointing, just the tone and the angst and the anger at Donald Trump, his supporters. Really, then, you know, some people react to things like that. They get angry as well. And then you fuel the fires.”

Newt Gingrich said on “Outnumbered” that left-wing rhetoric has sent a “signal” that “it’s okay to hate Trump, it’s okay to think of Trump in violent terms,” asking, “And we’re supposed to rise above it?”

Commentator Harlan Hill tweeted: “Events like today are EXACTLY why we took issue with NY elites glorifying the assassination of our president.”

When the Washington Post quoted an acquaintance as saying the shooter had volunteered for Bernie Sanders, and it turned out he loved Rachel Maddow, I knew the guilt-by-association efforts would intensify. (Sanders said he was “sickened by this despicable act.”)

Let’s be clear: The person responsible for the shooting is James Hodgkinson of Belleville, Ill. This is a guy who accused Trump of treason on social media and was arrested for assaulting his girlfriend a decade ago.

Now would the media’s connect-the-dots mentality shift into higher gear if a Trump supporter who hated liberals started firing at a Democratic baseball practice? Probably. But that would be equally wrong.

Virginia Gov. Terry McAuliffe, asked by reporters for his reaction, did say there were “too many guns on the street,” that background checks are needed, and that 93 Americans die each day from gun violence (he mistakenly said 93 million). Democrats, as President Obama did, often turn these tragedies into a pitch for gun control. But in fairness, McAuliffe was responding to a question and said this was “not for today’s discussion.”

While it would be good for our society if everyone toned down the rhetoric, to tie such talk to the actions of an angry or crazed gunman firing at innocent people is a political blame game.

I said the same thing when some on the left tried to blame Trump’s attacks on the press for Montana Rep. Greg Gianforte body-slamming a reporter. The person responsible was Gianforte, who pleaded guilty, and no one else.

But some on both sides, it seems, cannot resist the impulse to point fingers after a shooting takes place.

The president struck just the right tone when he said, “We may have our differences, but we do well, in times like these, to remember that everyone who serves in our nation’s capital is here because, above all, they love our country.”

And it was an uplifting moment when Paul Ryan told the House, “An attack on one of us is an attack on all of us.”

It was also nice when Nancy Pelosi embraced Ryan’s remarks and said she prays for Donald Trump as well as Barack Obama.

I was one of the loudest voices in castigating Kathy Griffin’s stunt with the bloody Trump mask. I denounced the New York Public Theater’s Julius Caesar production, which substituted a Trump figure who gets stabbed to death on stage. This sort of thing does poison the climate.

But it’s not their fault that Hodgkinson brought his rifle and many rounds of ammunition to a baseball game. And it strengthens our democracy to come together, rather than pull apart, after such a sad day.