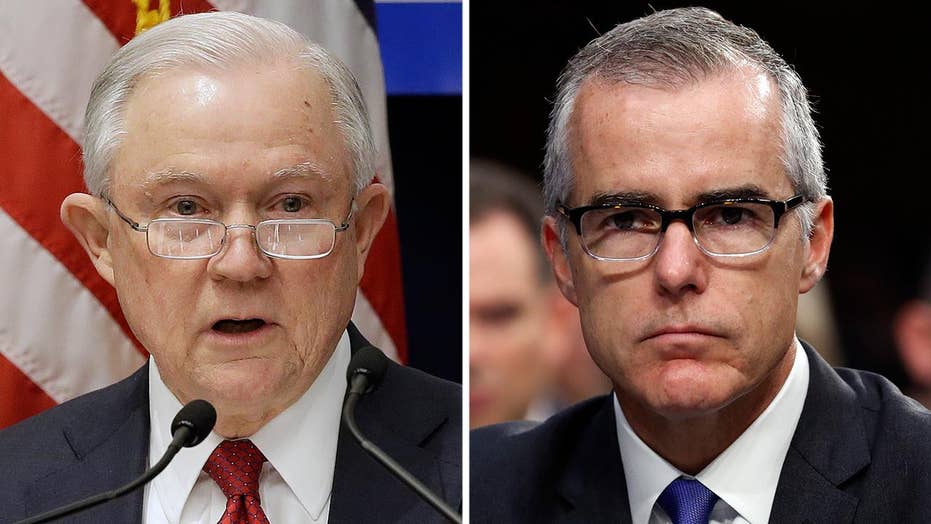 Sources: Sessions could fire McCabe before his retirement

Attorney General Jeff Sessions is considering firing top FBI official Andrew McCabe before he officially retires from the bureau in a few days, a move that could deprive the outgoing deputy director of pension benefits, Fox News has confirmed.

Sources said if McCabe is terminated by close of business this Friday, that would mean McCabe would not receive a government pension.

A source told Fox News that McCabe's pension is in "jeopardy."

“The Department follows a prescribed process by which an employee may be terminated,” DOJ spokeswoman Sarah Isgur Flores said in a statement. “That process includes recommendations from career employees and no termination decision is final until the conclusion of that process.  We have no personnel announcements at this time.”

According to the New York Times, which first reported the story, the Justice Department’s inspector general concluded in an upcoming report that McCabe has not been forthcoming with its investigation to how the FBI handled its probe into Hillary Clinton's email server.

The inspector general’s finding sparked an FBI disciplinary process that recommended his firing, something Sessions can accept or reverse, the paper said.

Fox News has learned that the FBI’s Office of Professional Responsibility made the recommendation to terminate McCabe. Sessions is reviewing that recommendation and can give it the final approval or step in to stop the process.

McCabe’s pension kicks in on Sunday, his 50th birthday, so the termination would have to be done by close of business on Friday to stop it.

Fox News has learned the Inspector General’s Investigation, which landed McCabe in hot water, faults the former deputy director for the way he answered questions about his approval for interactions between an FBI official and a reporter about the bureau's investigation into the Clinton Foundation.

In January, McCabe was "removed" from his post as deputy director, setting in a motion a plan to leave the bureau after months of conflict-of-interest complaints from Republicans including President Trump.

A source at the time told Fox News that McCabe is taking “terminal leave” – effectively taking vacation until he reaches his planned retirement in a matter of weeks.

Republicans have questioned McCabe’s ties to the Democratic Party, considering his wife ran as a Democrat for a Virginia Senate seat in 2015 and got financial help from a group tied to Clinton family ally Terry McAuliffe.

Trump himself has taken at McCabe, drawing attention to the FBI official’s desire to serve at the bureau long enough to receive retirement benefits.

Trump has also tweeted about ties between McCabe’s wife and McAuliffe.

“How can FBI Deputy Director Andrew McCabe, the man in charge, along with leakin’ James Comey, of the Phony Hillary Clinton investigation (including her 33,000 illegally deleted emails) be given $700,000 for wife’s campaign by Clinton Puppets during investigation?” Trump asked last year.

Over the last year, Department of Justice Inspector General Michael Horowitz has been conducting a review of the FBI and DOJ’s actions related to the investigation into Hillary Clinton’s use of a private email server while she was secretary of state.

Horowitz's investigation is looking at a variety of allegations, including whether it was improper for former FBI Director James Comey to make a public announcement about not recommending prosecution over the email arrangement – he also faulted Clinton and her associates for being “extremely careless” with classified information.

Horowitz also is reviewing whether McCabe should have recused himself from the probe early because of his family’s ties to the Democratic Party. (He did not do so until a week before the election.)

Horowitz told lawmakers during a November congressional hearing that he is aiming to release the report in the “March, April time period.”

“We’re moving along quite expeditiously,” Horowitz said at the time.