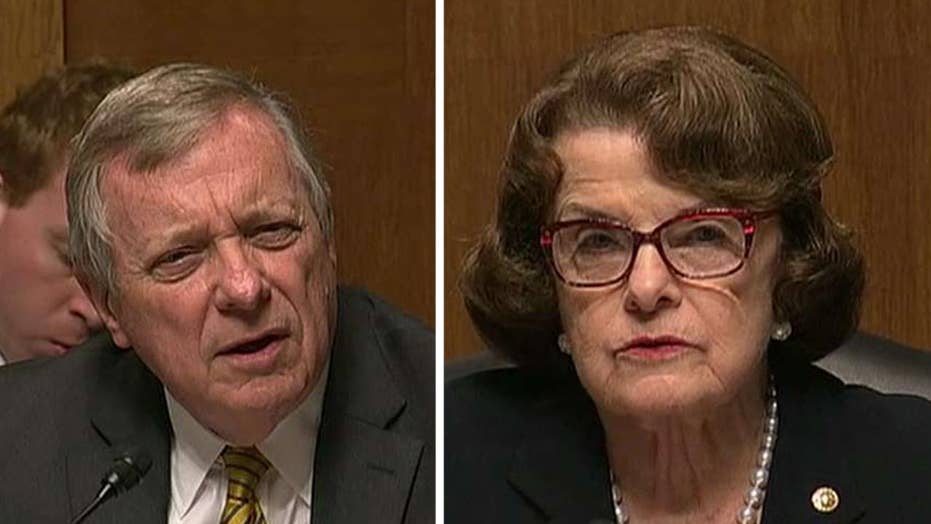 Democrats have a religion problem

Sens. Diane Feinstein and Dick Durbin criticized for their grilling of 7th Circuit Court of Appeals nominee Amy Coney Barrett about the role of faith in her work. Sen. Mike Lee weighs in #Tucker

WASHINGTON -- A Senate panel narrowly backed one of President Donald Trump's judicial nominees who was pressed by Democrats on whether her Roman Catholic faith would influence her legal judgment.

The questioning of Amy Coney Barrett at her confirmation hearing angered religious leaders, with the U.S. Conference of Catholic Bishops saying the challenge to the Notre Dame professor was a painful reminder of a time when "anti-Catholic bigotry did distort our laws and civil order."

On Thursday, the Judiciary Committee voted 11-9 to recommend her nomination to the full Senate. If confirmed, she would serve on the U.S. Court of Appeals for the 7th Circuit.

Democrats defended their questioning of Barrett before casting their votes.

California Sen. Dianne Feinstein, the panel's top Democrat, said Barrett had no experience as a judge and worked on only one trial before becoming a professor. Feinstein said lawmakers had to focus on her writings, and, "I think that has been exaggerated out of any reality."

Feinstein rejected any suggestion that she was biased against Catholics, saying she was a product of Catholic schools and had spent more time in a church than she has in a synagogue. She then recounted that some 60 groups wrote her in opposition to Barrett's confirmation. She said their main concern was whether Barrett would follow the law if she were to become a judge.

During the confirmation hearing, Feinstein had told Barrett that dogma and law are two different things and she was concerned "that the dogma lives loudly within you."

The U.S. Conference of Catholic Bishops said the challenge to Barrett was a painful reminder of a time when "anti-Catholic bigotry did distort our laws and civil order."

Sen. Chuck Grassley, R-Iowa, the committee chairman, called Barrett eminently qualified and an exceptionally bright nominee who has received praise and support across the legal profession. He maintained that Democratic lawmakers were in the wrong in their questioning.

"Their questions strongly implied that she's too Catholic for their taste," Grassley said. "... I mention this because I fear the committee is heading down a dangerous road if we continue to ask nominees questions like this."

A key focus of the hearing was a 1998 law review article titled "Catholic Judges in Capital Cases." In the article, Barrett and John H. Garvey said Catholic judges are obliged to adhere to their church's teaching on moral matters and the legal system has a solution for this dilemma by allowing judges to recuse themselves when beliefs keep them from doing their job.

But critics said judges don't get to pick and choose which issues come before them, and it's incumbent upon judges to follow legal precedent.

Sen. Dick Durbin, D-Ill., who said he was Catholic, also was criticized for asking Barrett during her confirmation hearing if she considered herself an orthodox Catholic.

"Let me say at the outset, it was the nominee herself, in her 47-page law review article, who raised this issue of whether the teachings of the Catholic Church should have any impact on the discharge of judicial duties of a Catholic judge," Durbin said.

Lawmakers from both parties had questioned Barrett about her religious faith. Durbin pointed out that Grassley had asked Barrett when it was proper for a judge to put religious views above applying the law. He said he didn't believe Grassley would apply a religious test in evaluating a nominee. Still, Grassley felt it was important to ask the nominee to clearly state her position on the convergence of her faith, her conscience and her duties as a federal judge.

The committee also voted on a party-line basis to forward the nominations of Joan Louise Larsen of Michigan to serve on the U.S. Court of Appeals for the 6th District and of Eric Dreiband to serve as assistant attorney general in charge of the Civil Rights Division at the Department of Justice.