Sen. Chuck Schumer has vowed to "fight Donald Trump all the way, in every way.” (AP)

Sen. Chuck Schumer, D-N.Y., on Monday—citing an equipment issue that grounded his small plane—was forced to cancel a town hall in Brooklyn, annoying some in attendance who waited hours for his arrival in a hot synagogue.

Schumer, instead, reportedly conducted a teletownhall, and took calls from attendees.

One person asked why he cooled down Rep. Maxine Water’s rhetoric on harassing President Trump’s administration officials in public. Another called on the senator to use his leadership position to unite the party and oppose any extreme Supreme Court pick to replace Anthony Kennedy. 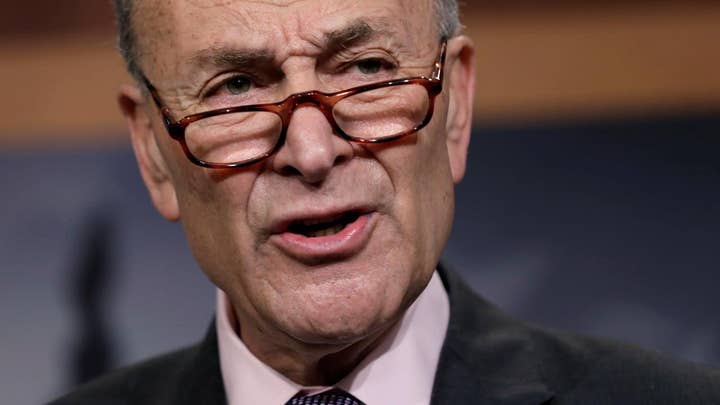 “Whip the vote,” members at the meeting chanted, which means to galvanize the party, according to Politico. “Whip the vote.”

Schumer, the Senate Democratic leader, has been reportedly feeling pressure from Democrats on the left and some moderates on how to effectively approach Trump’s future Kennedy replacement.

The long-time champion of the left, appears to be facing a similar wave confronting his colleague in Congress, Nancy Pelosi. The party's left is emboldened and intent on making sure their leaders know it.

“There are thousands and thousands of people in this city who want to support him, so that he can win battles,” Liat Olenick, 32, a member of a liberal group in Brooklyn, told Politico. “But he’s not speaking to those people, and we want him to do that.”

Another person at the meeting told the senator, “We are in a gunfight, but we have a butter knife.”

Schumer, who said he was stuck in Utica, reminded attendees that “Brooklyn, New York is not the center of the country,” according to a New York Times reporter who was tweeting about the event.

Schumer has been crystal clear on who he expects Trump to nominate. In an op-ed in The New York Times on Monday he called on a “bipartisan majority” that believes in upholding established law on abortion.

Schumer said that while Democrats don’t control the Senate — Republicans have a 51-49 edge — most senators back abortion rights. In an unusually direct appeal to voters, he said that to block “an ideological nominee,” people should “tell your senators” to oppose anyone from Trump’s list.

The Hill reported that Schumer hopes to stop the president from swaying the high court to the right for decades. But he has to work with Democrats in states that Trump carried, including Sen. Joe Manchin, D-W.Va., Sen. Heidi Heitkamp, D-N.D., and Sen. Joe Donnelly, D-Ind., who all voted for Trump’s earlier pick, Neil Gorsuch.

Trump is expected to begin his search in earnest this week at the White House and said the process could include interviews at his golf club before he reaches a final decision following the Fourth of July holiday.

“We need to fight Donald Trump all the way, in every way,” Schumer reportedly said.