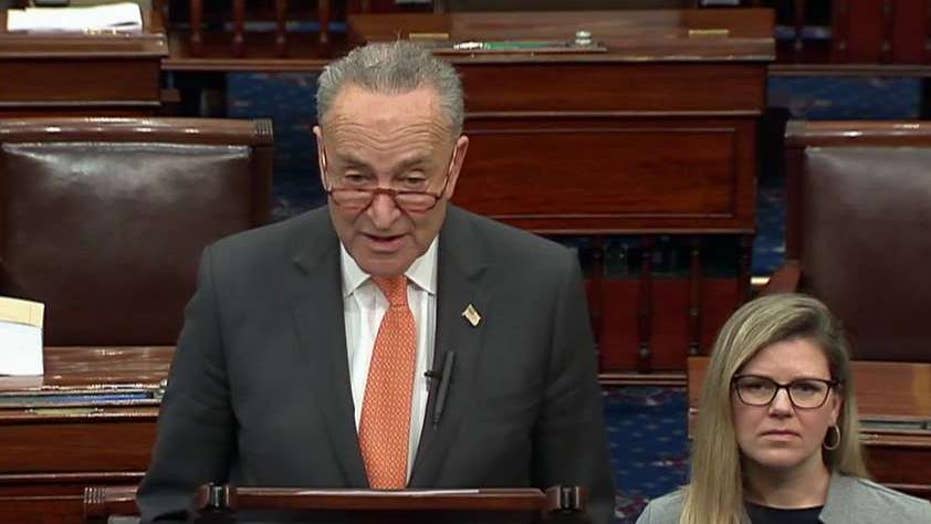 Schumer defends request for impeachment witnesses: What are Republicans afraid of?

Democrat Sen. Chuck Schumer calls on Senate Majority Leader Mitch McConnell to give an explanation for why he rejects witnesses in a potential impeachment trial.

Sen. Chuck Schumer, D-N.Y., is making a renewed push for the Senate to issue subpoenas demanding testimony and documents as part of President Trump's expected impeachment trial, citing new emails related to the withholding of Ukraine military aid -- even as Republicans reject the demands as premature.

In a "Dear Colleague" letter sent Monday to fellow senators, the Senate minority leader cited records including a newly revealed email that Office of Management and Budget Associate Director Michael Duffey sent to Defense Department officials roughly an hour-and-a-half after Trump's famous July 25 phone call with Ukrainian President Volodymyr Zelensky. The email showed a push to place aid on hold, after Trump made his request for Ukraine's help in political investigations.

"Based on guidance I have received and in light of the Administration's plan to review assistance to Ukraine, including the Ukraine Security Assistance Initiative, please hold off on any additional DoD obligations of these funds, pending direction from that process," Duffey said in the email, obtained by The Center for Public Integrity via a Freedom of Information Act request. Duffey concluded by stating, "Given the sensitive nature of the request, I appreciate your keeping that information closely held to those who need to know to execute the direction."

With the email fueling allegations of a quid pro quo, which Trump denies, Schumer claimed that the known existence of this message shows a need to obtain other records.

"The December 21st release of partially-redacted versions of these communications in response to the FOIA lawsuit further underscores why the Senate must review all of these records in unredacted form," Schumer wrote. 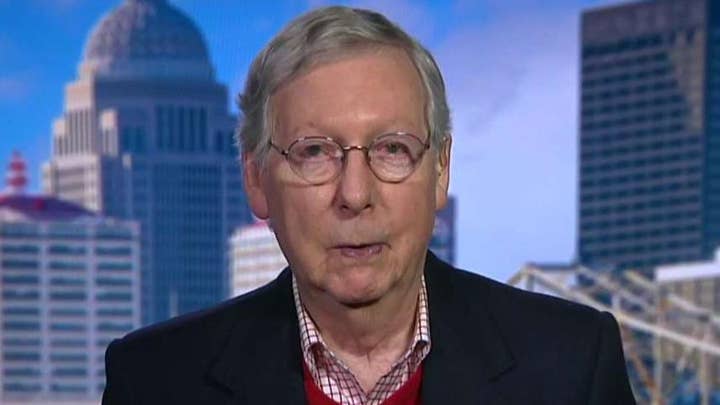 Senate Majority Leader Mitch McConnell, R-Ky., meanwhile, has objected to Schumer's demands for subpoenas, claiming it is not the Senate's job to collect facts going into an impeachment trial -- maintaining that was the role of the House impeachment inquiry.

While Democrats note that the White House instructed current and former officials not to comply with House requests, the House opted not to challenge the Trump administration's assertion of privilege in court.

On Monday morning, McConnell told "Fox & Friends" that he has spoken to Schumer, but so far no progress has been made.

At the same time, he is waiting for House Speaker Nancy Pelosi to deliver the articles of impeachment to the Senate, claiming he has no authority to move forward until that happens. Pelosi has stated that she will not appoint impeachment managers to represent the House until the Senate determines the trial's process.

McConnell said Monday he hasn't "ruled out witnesses," but argued the Senate should follow the Clinton impeachment model, proceeding with a trial while working out the details of potential witnesses and other matters later.

“We’re at an impasse, we can’t do anything until the speaker sends the papers over," McConnell said. "So everybody, enjoy the holidays.”

But Schumer countered in his letter that during the Clinton trial, the Senate "had the benefit of thousands of pages of documents from the Department of Justice investigation by Independent Counsel Kenneth Starr."

He added: "There simply is no good reason why evidence that is directly relevant to the conduct at issue in the Articles of Impeachment should be withheld from the Senate and the American people. Relevant documentary evidence currently in the possession of the Administration will augment the existing evidentiary record and will allow Senators to reach judgments informed by all of the available facts."

For his part, Trump slammed Pelosi on Monday for making demands of the Senate regarding his pending trial.

"Pelosi gives us the most unfair trial in the history of the U.S. Congress, and now she is crying for fairness in the Senate, and breaking all rules while doing so," Trump tweeted Monday morning. "She lost Congress once, she will do it again!"