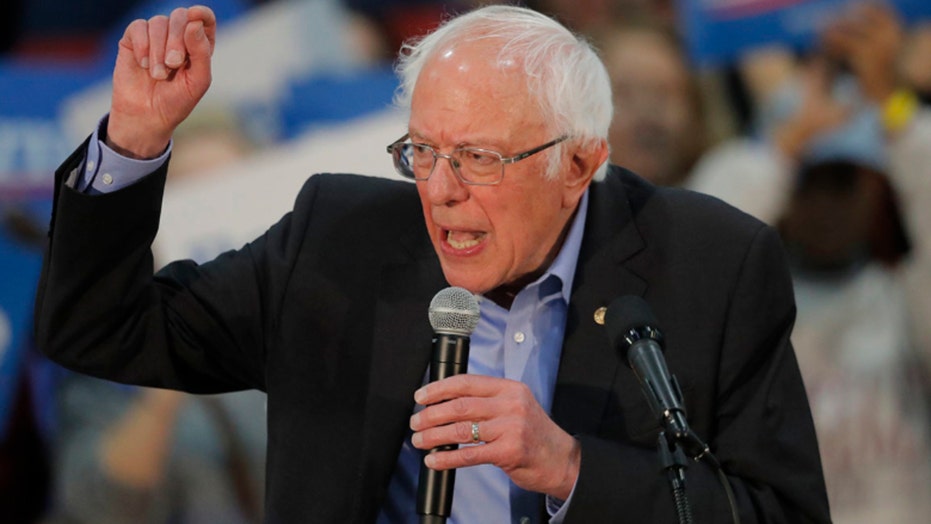 When are people going to hold Bernie Sanders legitimately accountable?&nbsp;

Sen. Bernie Sanders is taking more hits from critics who question whether the White House hopeful achieved anything of substance in his nearly 30 years in Washington.

Michael Bloomberg launched an ad Wednesday listing the hundreds of bills the Vermont independent has introduced in his three decades in the House and Senate -- pointing out only three have become law.

“Bernie loves to yell about what he wants but gets little done. We [need] a president that gets things done,” the ad says.

According to Congress.gov, Sanders was the lead sponsor on three bills that became law: the Veterans' Compensation Cost-of-Living Adjustment Act of 2013;  a 2014 law to name a Danville, Vt. post office the "Thaddeus Stevens Post Office" and a 2006 law to name a Fair Haven, Vt. postal facility the "Matthew Lyon Post Office Building." Some estimates have pegged this number as high as seven. He was also a co-sponsor on dozens of other successful bills and has touted, for instance, his work with the late Republican Sen. John McCain on a Veterans Affairs reform bill in 2014 – though he’s faced criticism for his belated response to the VA wait-time crisis that led to the legislation.

"Bernie is a talker. I’m a doer," Bloomberg said on Twitter in promoting the new ad.

A Georgetown University study last year found Sanders to be the least bipartisan member of the Senate -- ranking 100 out of 100 senators two years in a row.

WHERE DOES SANDERS STAND ON THE ISSUES?

Sen. Amy Klobuchar, D-Minn., was the only senator running for president to be ranked as bipartisan in the Georgetown study. Along with Bloomberg, former South Bend, Ind. Mayor Pete Buttigieg and others, she's taken aim at Sanders' pie-in-the-sky plans and has pitched herself as the senator with a record of enacting solutions.

At the South Carolina debate, she hit Sanders' "Medicare-for-all" proposal as an economy-busting unrealistic plan to kick 149 million Americans off their current health plans in four years.

Americans want progress on health care "instead of a bunch of broken promises that sound good on bumper stickers," Klobuchar said.

"In terms of getting your bills through Congress, we found I think, what, seven bills that you were the primary sponsor on that got enacted," Cooper said in the interview. "Two of them ... involved naming Post Office buildings."

Sanders said he has a record of passing bipartisan amendments to larger pieces of legislation while in the House and touted his improvements to the Obamacare legislation.

"Yeah, but if you look at the Affordable Care Act, my name was not on that bill," Sanders said.

"But you speak to anybody in Congress, I led the effort to bring $11 billion more into community health centers and expand -- primary health care in this country," Sanders said, calling Congress a "complicated place."

Meanwhile, certain House Democrats are distancing themselves from Sanders' democratic socialist agenda and are hitting him on his failure to sell his colleagues on his ideas.

Rep. Joyce Beatty, D-Ohio, who is facing a progressive primary challenger, questioned the math on Sanders’ sweeping proposals (“You have to be able to count”) and his ability to enact change if elected.

“Bernie Sanders has been here for almost 30 years. If this stuff was so great, why wouldn’t we have any of it now?" Beatty said.

Rep. Gregory Meeks, who has endorsed Bloomberg, said previously that Sanders isn't in Washington to work in harmony with Democrats.

"His revolution is to not just to stop the Republicans, it’s to blow up the Democratic Party," Meeks, D-N.Y., said.