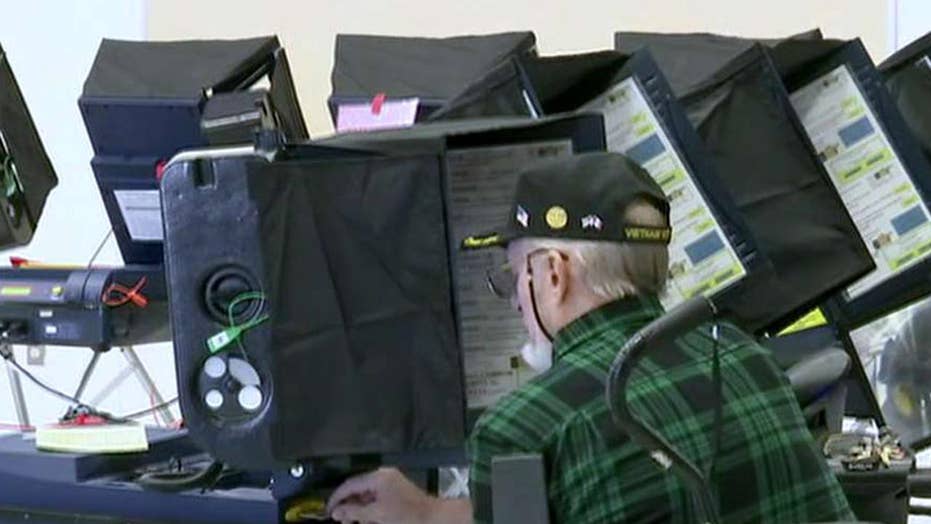 Galesburg, Ill., appears to be a typical small town, nestled in the farmlands of the Midwest.

But the unassuming slice of the American heartland, which was the site of an Abraham Lincoln-Stephen Douglas debate in 1858, was invaded by the Russians during the 2016 presidential election through a cyberattack on the state's voter registration rolls.

"The greatest concern that I have is that a foreign entity gets in and doesn't change a vote, but they just create instability that enough of the American people can't trust the vote," Sen. James Lankford, R-Okla., told Fox News.

"The greatest concern that I have is that a foreign entity gets in and doesn't change a vote, but they just create instability that enough of the American people can't trust the vote."

"It doesn't take any foreign government, whether it be Iran or Russia or North Korea or China or whoever it may be, to be able to reach into our system and change hardly anything. If it gives the appearance they could have changed something, whoever the loser is will say 'maybe I should have won.' That creates instability and it is really what the Russians are interested in."

The FBI and Department of Homeland Security say hackers from the GRU, the Russian intelligence service, successfully attacked the computers of the Illinois State Board of Elections. Of 7.9 million registered Illinois voters, the state Board of Elections told Fox News that a total of 76,000 Illinois voters may have had their information viewed, with the greatest number of them -- 14,121 -- being Galesburg residents.

"The scale and aggressiveness of the effort, in my opinion, made this one different," he testified. "It allowed Russia to do things that in the past they were not able to do."

He continued, "The primary goal in my mind was to sow discord and to try and delegitimize our free and fair election process. I also think that another of their goals, which the entire United States intelligence community stands behind, was to denigrate [former Secretary of State Hillary] Clinton and to try to help current President Trump."

There was no evidence that any vote was changed, officials said. The Illinois State Department of Elections told Fox News the hackers were not trying to target Galesburg specifically, but that the city's voting code happened to match the numbers the hackers used to breach the system.

Officials told Fox News that an IT technician was alerted June 12, 2016, when the "processor usage on the Illinois Voter Registration System server had spiked to 100 percent with no explanation," and "the intruders boosted the intensity of the attack to 5 hits per second."

The Russian assault on the U.S. election system has prompted new measures to protect votes across the country, for the midterm elections and the 2020 presidential contest.

"If you can get into a voter roll you can change it. You can add people to it, you can delete people to it and you can create chaos on Election Day," Lankford warned.

"We need to be able to step up our game. We have unprotected systems. There were 21 different states the Russians probed in 2016. They didn't get into all of those states, but they were probing and looking around to be able to see what they could do."

"We need to be able to step up our game. We have unprotected systems. There were 21 different states the Russians probed in 2016."

What they could do, experts predict, is cause exactly what Lankford fears could happen.

The bill is aimed at addressing some shocking oversights.

During the 2016 presidential election, some state and local election officials were not even initially aware their systems were targeted because they did not have appropriate security clearance from federal intelligence agencies to be told about it, officials said. The bill would establish a one-day security clearance -- so, for example, if the CIA detects an attempted foreign intrusion of a state or county system, a local official could be alerted.

The bill also would create a new panel of cybersecurity experts to assess vulnerabilities, and would provide federal money for states to beef up their election security.

DNI chief Clapper testified that the Russians kept stealing data to discredit a Clinton presidency; Catherine Herridge has the details for 'Special Report'

"The bill really does offer the key steps that Congress should be doing to protect our elections," noted election expert Larry Norden of the Brennan Center for Justice at New York University's School of Law.

Norden is deputy director of the center's Democracy Program and author of the extensive report, "Securing Elections from Foreign Interference." It called for Congress to provide grants to replace antiquated voting machines, require post-election audits, and upgrade the voting IT infrastructure, among other proposals.

The report bluntly stated: "The intelligence community's assessment is that Russia will continue to escalate its interference in our democracy, and other foreign powers or terrorist groups may become even bolder in the years to come. Complacency is not an option."

It also warned that "foreign interests are vying for power on the world stage by trying to shape American politics, of even attempting to cast doubts that Democracy really works. Against that backdrop, it is clear that strengthening election security is essential to protecting our national security."

'The vulnerability is real'

The recently passed omnibus spending bill did provide $380 million for states to improve their election security, a provision in the original election bill. But Norden said he wished additional new measures in the bill would be in place right now.

"There is a vulnerability and the question is, do you have the protections in place to detect if there is an attack, and to recover from it?" he asked. "The vulnerability is real and it's undeniable."

A Brennan Center for Justice survey of more than 200 election officials in 33 states found they wanted to buy new machines by the next presidential election but did not have the money right away.

"That’s a concern," Norden pointed out, "not only because older machines are more likely to break down, they're also more likely to be vulnerable to cyberattack. You are talking about systems that haven't gone through the more sophisticated certification process that we have now, and that often run on outdated software like Windows 2000."

The Senate Intelligence Committee has proposed mandating that states use only voting machines that provide paper proof of votes, a so-called paper trail, not connecting machines to the Internet and also requiring vote audits after every election.

Lankford said he was concerned not only about foreign governments; even domestic terrorist groups may attempt to target the vote.

"They could determine, 'Hey, I want to create some sort of turmoil in the American government, or in a certain state,' now that they have seen the Russians do it once. That can be copycatted by a lot of folks, and obviously it does not have to be a foreign actor next time. I think we just have to remain vigilant in the process, our election system is important. We need to make sure we secure this."

Lankford warned, "The last time it was the Russians. It may not be the next time."