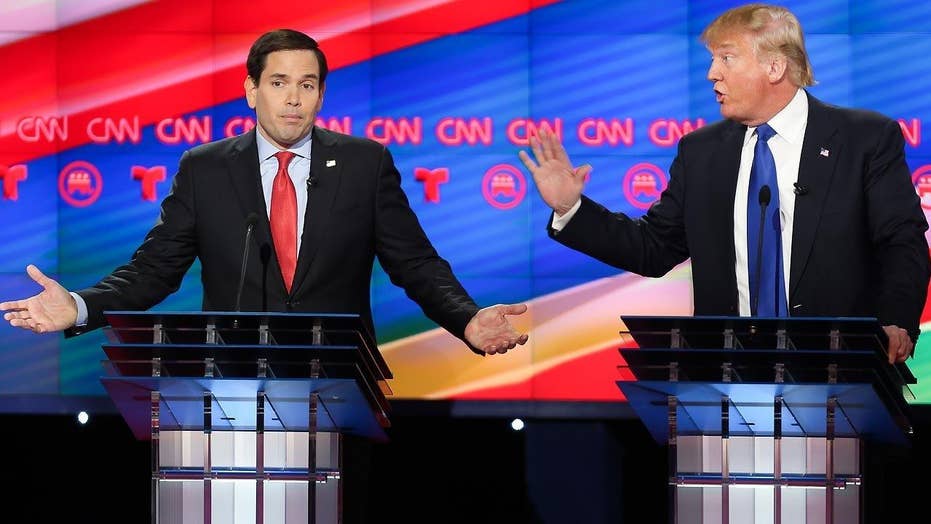 GOP presidential candidate Marco Rubio has taken off the gloves and aggressively attacked 'con artist' Trump and his business record and even poked fun at his tweets. But is it too little, too late? Supporter Sean Duffy goes 'On the Record'

Marco Rubio, joined at times by Ted Cruz, launched a battery of attacks against Donald Trump at a rowdy Republican debate Thursday, assailing his business record and even trying to turn the tables on the primary front-runner after he teased the senator over his infamous debate “meltdown” earlier this month.

Both Rubio and Cruz fought hard to throw Trump off his stride as the field charges into the all-important Super Tuesday contests. Rubio, in particular, was unrelenting in keeping the pressure on Trump Thursday night, going so far as to claim if Trump hadn’t inherited money he’d be “selling watches in Manhattan.”

“I took one-million and I turned it into 10 billion dollars,” Trump countered.

The front-runner stood his ground and cast the attacks as a desperate attempt to take down No. 1, at one point mocking Cruz’s criticism by saying, “Swing for the fences.” In an unruly debate where the moderators often lost control, Trump responded to many of the attacks with his trademark barrage of insults.

“This guy’s a choke artist. And this guy’s a liar,” he said, pointing to Rubio and then Cruz.

Rubio got some of the biggest applause of the night, though, for his response when Trump mocked him for repeating himself on stage weeks ago against then-candidate Chris Christie.

Rubio said Trump was doing the same thing as he described his plan to remove “lines around the states” to increase competition among health insurers.

At the CNN-Telemundo debate in Houston, Trump continued to tout his polling successes, and claimed he’s growing the Republican Party.

“We are building a new Republican Party. A lot of new people are coming in,” Trump said.

But his Senate candidate rivals did all they could to raise questions for the American people about Trump’s record as they head into Super Tuesday and try to prevent him from locking down the nomination next month.

Rubio mocked Trump’s past company bankruptcy filings. Cruz suggested Trump had something to hide in his still-unreleased tax returns (though Trump indicated he’d release them after his audit is over).

And both candidates cited the ongoing fraud case against the former Trump University, as well as decades-old allegations that he hired illegal immigrants from Poland for a project in New York.

“I‘m the only one on the stage that’s hired people. You haven’t hired anybody,” Trump told Rubio, calling his allegation on illegal immigrant hiring “wrong.”

But Rubio stood by it, and Cruz backed him up. Rubio later said Trump “lied about the Polish workers.”

“I guess there’s a statute of limitations on lies,” Rubio said.

According to press reports from more than 25 years ago on the case, Trump at the time claimed he didn’t knowingly hire undocumented workers. As for the fraud case, Trump downplayed it and said he’d eventually win.

The fighting even prompted Carson to plead at one point, “Could somebody attack me, please?”

Carson’s most-memorable, and strangest, line may have been when he said of vetting a Supreme Court nominee that he would look at the “fruit salad of their life.”

Kasich cast himself as the best candidate to take on Democratic front-runner Hillary Clinton.

“Executive experience really matters,” said the only governor remaining in the race.

Immigration was a top topic, as most the candidates talked tough on border security in Texas, the biggest delegate prize in next week’s contests.

Trump, for his part, doubled down on his promise to build a U.S.-Mexico wall if elected, responding to comments by former Mexican President Vicente Fox, who said Mexico will not pay for the "fing wall."

Trump said at the debate, “I will, and the wall just got 10 feet taller, believe me.”

Rubio again used the issue to bring up the illegal hiring case. “If he builds the wall the way he built Trump Towers, he’ll be using illegal immigrant labor,” he said.

Cruz also went after Trump, but the front-runner shot back with a personal attack, touting his own ability to get along with others and adding, “You get along with nobody. …You should be ashamed of yourself.”

Cruz shrugged off the comment and replied, “If you want to be liked in Washington, that’s not a good attribute for a president.”

He, too, challenged Trump’s record on immigration.

And Cruz challenged Trump when he claimed he doesn’t want “socialized medicine” but would also not allow people to “die on the streets.”

“Call it what you want,” Trump later said.

The debate in Houston was their last before more than a dozen states hold contests on Tuesday, when nearly half of the delegates needed to win the nomination are on the line. Anything close to a sweep by Trump would be devastating for the other remaining contenders.

The front-runner’s momentum has only intensified this month with three straight primary and caucus wins, and he’s threatening to knock down his rivals, one by one, in each of their home states in March.

Kasich’s campaign, despite performing poorly in the South Carolina and Nevada contests, issued a defiant call earlier Thursday for Rubio to drop out – citing his shaky numbers in his home state. The state is considered a must win for the Florida senator, but a new Quinnipiac University poll showed Trump leading Rubio 44-28 percent among primary voters there.

Though the insults and put-downs rendered foreign policy discussions few and far between Thursday night, Trump also took heat for saying he doesn’t want to take “big sides” in the Israeli-Palestinian conflict because he wants to be able to negotiate a deal.

Cruz accused him of wanting to stay “neutral” and Rubio said it’s not a deal “when you’re dealing with terrorists. “

“Marco is not a negotiator,” Trump said.