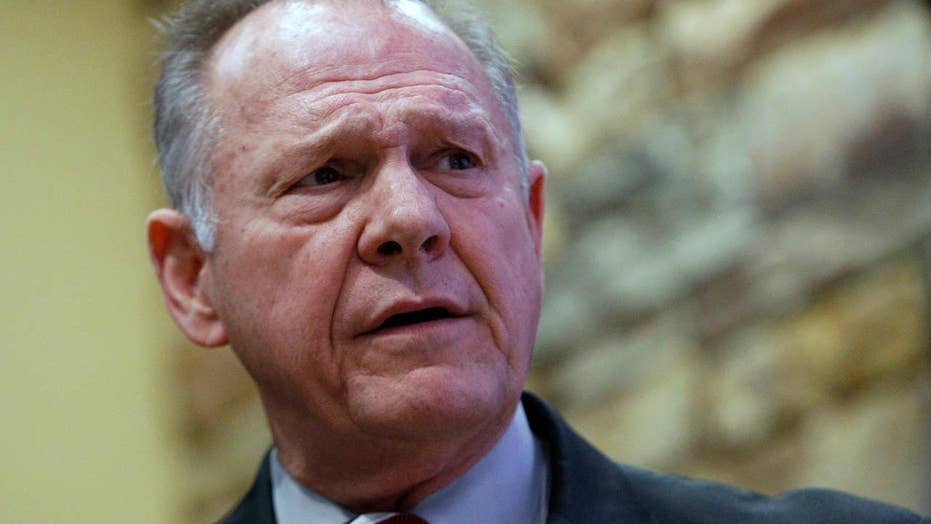 Embattled Senate hopeful Roy Moore answered demands he step aside in the Alabama election with more defiance Monday, threatening to sue the Washington Post for publishing "fake news" and calling for his fellow Republican and chief critic Mitch McConnell to leave his post as Senate majority leader.

“I think he should step aside,” McConnell told reporters in his home state of Kentucky.

McConnell said after the allegations were published last week that Moore should quit the race if the allegations are true. However, he also said Monday in Louisville: “I believe the women.”

This weekend, Moore, who on Dec. 12 will compete in a special general election for the seat, accused the paper of having a “political agenda” and vowed in the coming days to unmask those behind it.

“Why now?” he asked Saturday during an event in Alabama, his first public appearance since the allegations were reported last Thursday. “The Democrats know the importance of this election. They see it as a prelude to the 2018 races. … They are desperate. This is a prime example of fake news.”

The 70-year-old Moore has denied the allegations of sexual misconduct from roughly four decades ago. And he has threatened to bring a lawsuit against the liberal-leaning paper, which has endorsed his Democratic opponent, Doug Jones.

The Washington Post reported last week that Moore, who is former chief justice of Alabama’s Supreme Court, allegedly had sexual contact with a 14-year-old girl when he was 32. The woman told the Post that Moore took her to his house, where he took off her clothes and his pants, touched her and moved her hand to touch his underwear. Three other women also told the paper he pursued relationships with them when they were between 16 and 18 years old. The age of consent in Alabama is 16.

Strange has since occupied the seat and was considered by President Trump, McConnell and other Senate leaders as more supportive of their agenda than Moore, a Christian conservative.

Sen. John McCain, R-Ariz., has called for Moore to step aside, while others, including Texas GOP Sen. Ted Cruz, have suggested Moore quit the race if the allegations are proven to be true.

Still, Moore appears to be holding on to at least some of the support he had among Alabama voters, in his victory over Strange.

Bannon said Friday night at an event in South Carolina, after The Post story, about Moore: “I think you’re going to find in the mainstream media, either tonight or tomorrow … some pretty interesting stories about how that information got dropped and who paid for it and who weaponized it.”

Trump deflected questions Saturday, while on a 13-day Asian trip, about whether Moore should stay in the race.

“I have not seen very much about him, about it," he told reporters. “I haven’t been able to devote very much time to it.”

The president also referred to a White statement that read the president believes Moore will "do the right thing and step aside" if the allegations are true.

McConnell on Monday was also questioned about the possibility of a write-in effort by another GOP candidate.

"That's an option we're looking at ... whether or not there is someone who can mount a write-in campaign successfully," he said. Asked specifically about Strange, he said, "We'll see."

On the Democratic side, one of the Senate's moderate members is helping Moore's challenger raise campaign funds, underscoring the party's wary approach in an Alabama race that until recently was viewed as a certain win for the GOP.

"Doug's opponent, Roy Moore, is an extremist with a record of putting political ideology above the rule of law," Sen. Joe Donnelly, D-Ind., wrote in a weekend email soliciting contributions for Jones.

Even if Moore were to step aside, his name would likely remain on the ballot. And any effort to add Strange as a write-in candidate would threaten to divide the GOP vote in a way that would give the Democratic candidate a greater chance of winning.

Congress has some constitutional clout to stop Moore from being seated, if he wins next month, but the chamber has not ousted a member since 1862.

While he has called the allegations "completely false and misleading," in an interview with conservative radio host Sean Hannity, he did not wholly rule out dating teenage girls when he was in his early 30s. Asked if that would have been usual for him, Moore said, "Not generally, no."